PURCHASE, N.Y., Sept. 10, 2021 /PRNewswire/ -- Today, Pepsi unveils the new Pepsi-Cola Soda Shop, a modern take on classic soda shop flavors made with real sugar, available in Cream Soda and Black Cherry. To introduce the new product and celebrate the 50th anniversary of "Grease," Pepsi enlisted one of today's hottest stars in music, Doja Cat,  to refresh and remake one of the most recognizable songs of the soda shop era, "You're the One That I Want." 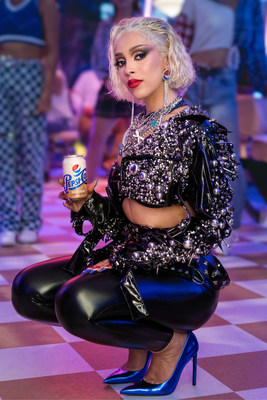 Pepsi and Doja Cat's reimagination of "You're the One That I Want" is grounded in the original track but features new instrumental and vocal twists unique to Doja Cat's instantly recognizable style. The track comes to life in a music video-style spot directed by the award-winning Hannah Lux Davis and choreographed by industry icon Sean Bankhead. In the video, Doja Cat is seen walking the Rydell High campus but, unlike in the original song, she isn't after a man. Instead, her heart is set on an ice-cold can of Pepsi-Cola Soda Shop.

"Working with Pepsi on this remake of 'You're the One that I Want' has been surreal," said Doja Cat. "It's such an iconic song and brand, so to have the creative license to put my own spin on it for the launch of Pepsi-Cola Soda Shop was a once-in-a-lifetime opportunity; I had to be a part of it."

"Pepsi has a great heritage in music and we couldn't be more thrilled to continue this legacy by partnering with Doja Cat around the launch of Pepsi-Cola Soda Shop," said Todd Kaplan, VP of Marketing – Pepsi.  "With a nod to the nostalgic soda shop flavors of the past, Pepsi-Cola Soda Shop is sure to become an instant classic in our limited time offering lineup."

Starting now, fans can listen to the track and view the new video here: https://youtu.be/D8rJ1qTEa2c. Starting September 20, fans nationwide can purchase the limited-edition Pepsi-Cola Soda Shop in Cream Soda and Black Cherry flavors.  Available in 20 oz bottles and 12 oz cans, Pepsi-Cola Soda Shop will be a seasonal addition to the growing roster of Pepsi offerings anywhere Pepsi products are sold.

About PepsiCo PepsiCo products are enjoyed by consumers more than one billion times a day in more than 200 countries and territories around the world. PepsiCo generated more than $70 billion in net revenue in 2020, driven by a complementary food and beverage portfolio that includes Frito-Lay, Gatorade, Pepsi-Cola, Quaker, Tropicana and SodaStream. PepsiCo's product portfolio includes a wide range of enjoyable foods and beverages, including 23 brands that generate more than $1 billion each in estimated annual retail sales. Guiding PepsiCo is our vision to Be the Global Leader in Convenient Foods and Beverages by Winning with Purpose. "Winning with Purpose" reflects our ambition to win sustainably in the marketplace and embed purpose into all aspects of our business strategy and brands. For more information, visit www.pepsico.com.

About Doja Cat3-time GRAMMY nominee Doja Cat made her first upload to Soundcloud in 2013 at just 16-years-old. Having grown up in and around the LA area, she developed a knack for music by studying piano and dance as a kid and listening to the likes of Busta Rhymes, Erykah Badu, Nicki Minaj, Drake, and more. Soon, she went from obsessing over Catwoman (the Halle Berry version) to "crate digging" on YouTube. The budding talent taught herself Logic and how to compose on a midi controller. Signed to Kemosabe/RCA in 2014, she released her Purrr! EP and followed that with her debut album Amala in spring 2018, but it was her August 2018 release of "Mooo!" which catapulted her into the mainstream and was met with critical acclaim.

Doja Cat released her sophomore album Hot Pink in November 2019 to mass critical acclaim, the album was a platinum success with over 10.3 billion streams worldwide. Hot Pink features "Juicy" which hit #1 at Rhythm radio, "Say So" her Grammy nominated #1 smash record and "Streets", the viral sensation that sound tracked the 'Silhouette Challenge,' one of the biggest TikTok trends to date.

The success of "Say So" which hit #1 on the Billboard Hot 100 and has been RIAA certified 4x platinum and streamed over 5.4 billion times catapulted Doja into global superstardom. In 2020 she took home the Best New Artist Award at the MTV VMAs, the MTV EMAs and the AMAs (where she also won the Best Female Soul/R&B Artist Award.) She has been nominated for countless awards including 3 GRAMMY Awards, 5 Billboard Music Awards, 4 American Music Awards, 4 MTV VMA Awards, 2 BET Awards, and 2 People's Choice Awards.

Doja's creativity and showmanship as a performer have been praised time and time again, she has delivered unique and show stopping performances on nearly all the major Award Show stages including the GRAMMY Awards, the American Music Awards, the Billboard Awards and the MTV VMA and EMA Awards. Her last tour sold out in 10 minutes and she has played numerous festivals including Rap Caviar Live Miami, Posty Fest, Day n Vegas and Rolling Loud LA. Doja Cat's new album Planet Her is out now.

Ángela Aguilar And Manzanita Sol Join Forces To Give Back To Los...