NEW YORK, Feb. 6, 2020 /PRNewswire/ -- Scholastic, the global children's publishing, education and media company, today revealed the cover of a stunning new edition of Harry Potter and the Sorcerer's Stone (Scholastic Inc. Trade Hardcover Edition ISBN 978-1-338-59670-0; $37.99; All Ages) to be published on October 20, 2020. This innovative edition of the first book in the Harry Potter series is designed and illustrated by the award-winning design studio MinaLima, best known for establishing the visual graphic style of the Harry Potter and Fantastic Beasts films. 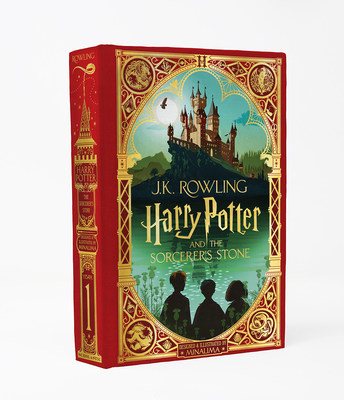 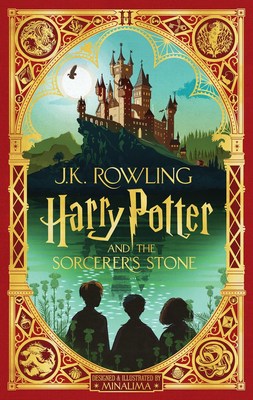 "This new edition of Harry Potter and the Sorcerer's Stone is the perfect way to start a new generation of readers on their Hogwarts journey, and at the same time is sure to be a treasured keepsake for fans to add to their collection," said Ellie Berger, President Scholastic Trade. "The Harry Potter series continues to inspire readers of all ages with its universal themes of friendship, imagination and the triumph of good over evil."

Harry Potter and the Sorcerer's Stone was published by Scholastic in the U.S. in September 1998 with a first printing of 50,000 copies. More than 20 years later, the Harry Potter book series has sold more than 500 million copies worldwide.

"Twenty years of designing for the Wizarding World have come full circle in this extraordinary opportunity to depict Harry Potter and the Sorcerer's Stone in a whole new way. From creating Harry's Hogwarts acceptance letter for the first film, to envisioning his world for this new illustrated edition, MinaLima's many invitations to visualize this fantastic universe never cease to beguile. We have sought to bring together our artistry with J.K. Rowling's singular storytelling to offer the reader a completely fresh experience of this now new classic work," said Eduardo Lima & Miraphora Mina.

MINALIMA DESIGN is an award-winning graphic design studio founded by Miraphora Mina and Eduardo Lima, best known for their ten-year involvement in the Harry Potter film franchise, where they established the visual graphic style of the film series. From their London studio they have continued telling stories through visuals from designing books and packaging to creating graphic props for films such as Sweeney Todd (2007), The Imitation Game (2014), and the Fantastic Beasts films. They also designed the bestselling books The Case of Beasts: Explore the Film Wizardry of Fantastic Beasts and Where to Find Them, The Archive of Magic: Explore the Film Wizardry of Fantastic Beasts: The Crimes of Grindelwald, J.K. Rowling's screenplays for the Fantastic Beasts films, Peter Pan, The Jungle Book, Beauty and the Beast, The Little Mermaid and Other Fairy Tales, The Secret Garden, Alice's Adventures in Wonderland, and The Adventures of Pinocchio.

About Scholastic Scholastic Corporation (NASDAQ: SCHL) is the world's largest publisher and distributor of children's books, a leading provider of literacy curriculum, professional services and classroom magazines, and a producer of educational and entertaining children's media. The Company creates and distributes quality books and e-books, print and technology-based learning programs for pre-K to grade 12 and other products and services that support children's learning and literacy both in school and at home. With 15 international operations and exports to 165 countries, Scholastic makes quality, affordable books available to all children around the world through school-based book clubs and book fairs, classroom libraries, school and public libraries, retail and online. True to its mission of 100 years to encourage the personal and intellectual growth of all children beginning with literacy, the Company has earned a reputation as a trusted partner to educators and families. Learn more at www.scholastic.com.

Scholastic Reveals Cover Of Spectacular New Edition Of Harry Potter And The Sorcerer's Stone To Be Published On October 20, 2020