HYDERABAD, India, Dec. 24, 2019 /PRNewswire/ -- According to new market research report by Mordor Intelligence, the market for Unmanned Aerial Vehicles is expected to grow at a CAGR of more than 10% during the forecast period. Growing applications of UAVs for various commercial purposes, like remote sensing, photo and videography, oil, gas, and mineral exploration, disaster relief, recreational uses, and other purposes, are driving the growth of the market studied. 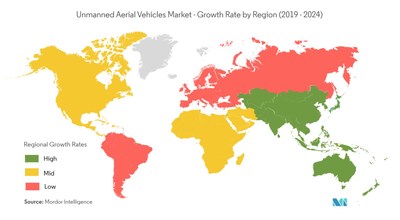 UAVs are pilotless aircraft, either controlled by remote control by a human operator, or autonomously by onboard computers, and uses aerodynamic forces to navigate and perform desired functions. The report on unmanned aerial vehicle (UAV) market covers the usage of UAVs in the commercial, civil, and military applications. Moreover, the UAV market has been segmented based on the size of the UAVs. Small UAV are group 1 UAVs, which have a maximum gross take-off weight (MGTW) of about 0 - 20 lbs. Medium UAV comes under group 2 UAVs, which have an MGTW of about 21 - 55 lbs. UAVs classified under group 3,4, and 5 are known as large UAVs. The large group of UAV has an MGTW of more than 55 lbs.

Highlights of the Market:

Know more about the UAV Market

Mordor Intelligence has segmented the Unmanned Aerial Vehicles Market on the basis of UAV Size, Application, and geography:

The Boeing Company, Northrop Grumman, Israel Aerospace Industries, Elbit Systems, and General Atomics are some of the prominent players in the military segment of the market studied, while the commercial UAV segment is dominated by companies, such as DJI and Parrot Drones SA, which have a large share in the small UAV segment of the market studied. Increasing military procurements of HALE, MALE, and tactical UAVs may help the military drone manufacturers to further increase their market share to a huge extent, as compared to small commercial UAV manufactures.

Mordor Intelligence, LLP. provides market intelligence and advisory services that empowers enterprises to shape their strategic decisions. With a strong team of in-house experts and a host of industry tie-ups, Mordor offers syndicated and custom market intelligence services that have helped more than 700 clients gain an edge over their competition. Mordor's expertise lies in niche analysis with a quick turnaround time, making it the preferred choice for startups as well as Fortune 500 organizations.