REYKJAVIK, Iceland, April 22, 2020 /PRNewswire/ -- Scientists at deCODE genetics and colleagues from the Max Planck Institute and universities in Denmark and Iceland today publish in Nature the first study to use whole-genome sequence data from across a population to shed light on the present-day legacy of interbreeding between modern and archaic humans more than 50,000 years ago. In general terms, the findings support previous estimates that most people outside of Africa have approximately 2% archaic ancestry, predominantly the result of repeated contact and interbreeding between groups of Homo sapiens and multiple Neanderthal individuals. The results also show more significant than expected genomic fragments from Denisovans, another archaic human species that interbred with both Neanderthal and Homo sapiens. 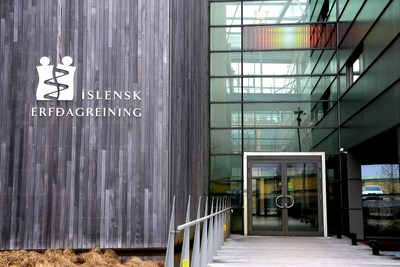 Yet the principal significance of this study lies in the unprecedented magnitude of data that was used to understand the nature and impact of this archaic legacy. In its first phase, the study utilizes whole genome sequence (WGS) data from 28,000 Icelanders, nearly ten percent of the entire population, and 286 sub-Saharan Africans in the 1000 Genomes project. A limiting factor in previous studies has been an overreliance on searching modern genomes for sequence fragments derived from just three archaic individuals for whom we have good quality sequence data: two Neanderthals and one Denisovan. The authors here turn this approach on its head, using the African sequences as a baseline for Homo sapiens with no introgression from Neanderthals, and against which they compared the Icelandic sequence data. The resulting chromosomal fragments found in Icelanders but not shared by Africans comprise a vast catalogue of 15 million putative archaic fragments.

After combining identical and overlapping fragments, the authors identified more than 50,000 distinct archaic fragments covering 38-48% of the readable genome. These contain nearly 400,000 single-letter sequence variants, that are absent from the African samples. Intriguingly, in the Icelandic samples the authors identify nearly 300 "archaic deserts" where there are no archaic fragments; these cover nearly 25% of the genome, including the entire X chromosome.

To better understand the phenotypic impact of the archaic variants, the deCODE team examined them for association with 271 phenotypes in whole-genome data on 210,000 Icelanders. After winnowing suggestive associations in order to eliminate those driven be nearby non-archaic variants, they identified five archaic variants with genome-wide significant associations. One has previously been linked to decreased levels of prostate specific antigen (PSA) and risk of prostate cancer, but was not known to be of archaic origin; two decrease levels and mass of hemoglobin; a fourth increases the time it takes for blood to clot; and the fifth decreases height.

"Whether individually or collectively, our genome enables us to learn more about who we are by telling us where we come from. This paper is a kind of ancestry report for one branch of our species, and it's telling us that in this particular neighborhood we are not just Homo sapiens but also the descendants of ancient archaic humans – cousin species whose lineage is thus not entirely extinct," said Kari Stefansson, CEO of deCODE and a senior author on the paper. "We are scratching the surface of what this hybrid legacy means. What we know is that in the 50,000 years from their time to this, our adaptability and diversity have enabled us to mix and move, settle and thrive in every corner of the planet as they did not. In these dark days we would do well to remember that our differences are literally the mark of our success, and so to help each other as best we can."

Based in Reykjavik, Iceland, deCODE is a global leader in analyzing and understanding the human genome. Using its unique expertise in human genetics combined with growing expertise in transcriptomics and population proteomics and vast amount of phenotypic data, deCODE has discovered risk factors for dozens of common diseases and provided key insights into their pathogenesis. The purpose of understanding the genetics of disease is to use that information to create new means of diagnosing, treating and preventing disease. deCODE is a wholly-owned subsidiary of Amgen (NASDAQ:AMGN).