GLENDALE, Calif., Oct. 29, 2018 /PRNewswire/ -- Today, IHOP® Restaurants unveiled its limited-time holiday menu inspired by Illumination Entertainment's and Universal Pictures' new film,  Dr. Seuss' The Grinch, coming to theaters November 9. Based on the beloved holiday classic, The Grinch tells the story of a cynical grump who goes on a mission to steal Christmas, only to have his heart changed by a young girl's generous holiday spirit. The pairing of these iconic brands infuses the magical spirit of Whoville into a unique selection of holiday tastes and treats created by the IHOP culinary team. 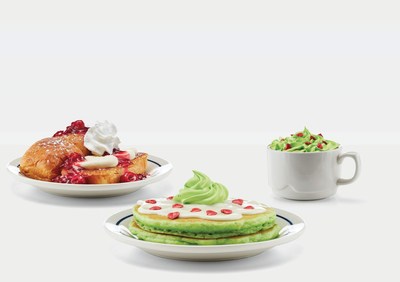 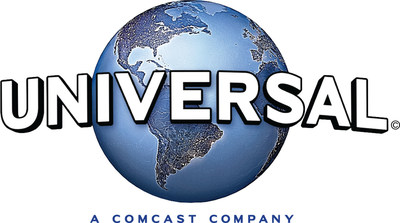 Sure to warm the hearts of guests of any age, the festive menu line-up is available only at IHOP restaurants now through December 31, 2018 and includes:

For the littlest of Whos, IHOP is also introducing a new kids menu for the season:

"The holidays are such a special time for families and creating a delicious menu that reflects the fun and whimsy of Whoville in Dr. Seuss' beloved story about the Grinch is the perfect way for us at IHOP to celebrate the season," said Alisa Gmelich, Vice President, Marketing at IHOP. "We couldn't think of a better partner than Illumination and Universal Pictures -- their new animated feature Dr. Seuss' The Grinch is sure to be truly entertaining for all ages."

"Our Grinch-inspired menu is one-of-a-kind filled with hot, fluffy Grinch's Green Pancakes made with our signature Buttermilk batter and topped with sweet cream cheese icing and candy hearts, a creamy Minty-Who Hot Chocolate, and a bold new Who Roast Beast Omelette made with shredded beef, Monterey Jack and Cheddar cheeses, sautéed jalapeños and a tangy BBQ sauce," continued Gmelich. "And, to help jumpstart the holiday spirit, kids 12 and under eat free during the promotion every day from 4 to 10 PM."*

To celebrate Illumination and Universal Pictures' partnership with IHOP, Droga5's latest creative campaign for the brand inserts the new Grinch-themed menu into a fun and irreverent situation inspired by the movie. The TV spot opens in a police precinct during the holidays with a visibly-shaken victim who's had his new Grinch's Green Pancakes stolen. The inspiration being that when you bring Whoville to IHOP, you'd better keep a close eye on them when the Grinch is around. The spot will air nationally on TV, online and on social media beginning today, and can be viewed here.

The IHOP Grinch menu is available at IHOP restaurants nationwide from October 29 through December 31, 2018.

*From 4 PM to 10 PM, kids 12 and under receive a free entrée from the kids menu with each purchase of an adult entrée.  For a limited time at participating locations.  Drinks not included unless otherwise specified.  Not valid with any other discounts or coupons. Dine-in only. For more information or to find the nearest location, visit IHOP.com.

ABOUT INTERNATIONAL HOUSE OF PANCAKES, LLC  For 60 years, IHOP has been a leader, innovator and expert in all things breakfast, any time of day. The chain offers 65 different signature, fresh, made-to-order breakfast options, a wide selection of popular lunch and dinner items as well as meals under 600 calories. IHOP restaurants offer guests an affordable, everyday dining experience with warm and friendly service. Today, there are more than 1,750 IHOP restaurants around the world, including restaurants in all 50 states and the District of Columbia, Puerto Rico and Guam as well as Canada, Mexico, Guatemala, Panama, Lebanon, the Kingdom of Saudi Arabia, Kuwait, the United Arab Emirates, Bahrain, Qatar, Thailand, and India. IHOP restaurants are franchised by affiliates of Glendale, Calif.-based Dine Brands Global. (NYSE: DIN).

Illumination, founded by Academy Award® nominee Chris Meledandri in 2007, is one of the entertainment industry's leading producers of event-animated films.  The company's franchises include three of the top-eight animated films of all time, and its iconic, beloved brands—infused with memorable and distinct characters, global appeal and cultural relevance—have grossed more than $5.8 billion worldwide.

Illumination was recently honored by Fast Company as one of the world's most innovative companies.

Illumination, which has an exclusive financing and distribution partnership with Universal Pictures, has garnered an extraordinary number of franchise successes for a studio just over a decade old.  As the creator of the hugely successful world of Despicable Me, which was recently crowned the top-grossing box-office animated franchise globally, Illumination has evolved the Despicable Me series to include Minions, the third-highest-grossing animated film of all time and the most profitable film in Universal's history, as well as the Academy Award®- nominated Despicable Me 2 and summer 2017's Despicable Me 3, which made more than $1 billion at the global box office.

Illumination recently launched two original properties that captivated audiences worldwide: The Secret Life of Pets, which achieved the best opening for an original movie, animated or otherwise, in U.S. history, and the global smash, Sing.

Founded 11 years ago with the mission of putting a smile on the face of every member of the audience, no matter their age, Illumination continues to imagine both original stories, as well as unexpected adaptations of beloved pre-existing works.