"I've got no counters, no light fixtures, the wiring's bad, and one wall is missing," says Robin, a retired janitor from Illinois State University. What is she looking forward to most in the renovation? "I'm almost 70 and I've never had a dishwasher." 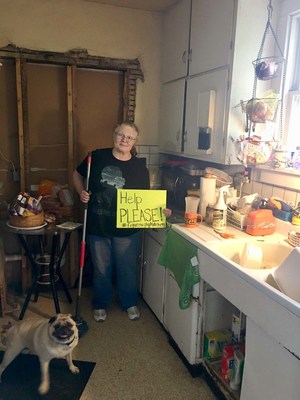 Check out Robin's kitchen in the attached videos and photos.

Robin beat out hundreds of entries to win the top prize, and thousands of votes were cast during the public voting period.

"It's our mission to help homeowners achieve their goals and dreams, and I was delighted that we were able to make some extra magic happen for Robin," says Mike Cagney, CEO of Figure. Figure approves home equity lines for homeowners in as few as 5 minutes, with funding in as few as 5 days*.

Robin and her husband, John, have lived in the house over 20 years. The 3-bedroom bungalow, in the Dimmitt's Grove neighborhood, was built in the 1860s, around the time of the Civil War. The kitchen was added after the original construction, but nothing has been upgraded since the 1940s, Robin says. They have renovated the bedroom and recently redid a bathroom, but have not had the money to update the kitchen.

"We've been saying we'll get to it for years," Robin says, but either money or time, or both, was missing. "I can't wait to invite everyone into the kitchen during family reunions."

"My deviled eggs are pretty famous here in the family, I have a crab dip my grandson loves, as well as chicken and dumplings," Robin says. "I used to bake Christmas cookies, but there was no way I could do that in this kitchen."

Robin's stepdaughter Emilie Kidwell learned about the contest online, and urged Robin to enter the contest. Robin's entry shows her standing in her wrecked kitchen holding a mop and a sign saying "Help PLEASE!"

Robin retired last year from her job at Illinois State University. John is a gutter installer for Midstate Gutter Company.

About Figure Figure Technologies, Inc. creates innovative consumer financial solutions for home improvement, debt consolidation and retirement, while providing its members with financial education and financial empowerment. The company's flagship product, the Figure Home Equity Line, provides homeowners with approvals to borrow against their home equity in as few as 5 minutes and funding in as few as 5 days. Based in San Francisco, Figure was co-founded by Mike Cagney, former co-founder and CEO of SoFi, along with Alana Ackerson, Cynthia Chen and June Ou. Figure has more than 160 employees in offices in California, Nevada, Montana and Utah. Figure has raised over $130 million since its founding in January 2018.

*Five-day funding timeline assumes closing the loan with our remote online notary. Funding timelines may be longer for loans secured by properties located in counties that do not permit recording of e-signatures or that otherwise require an in-person closing, or if the 5-day period includes a weekend or holiday. Funding in 5 days is not available for first lien loans secured by owner-occupied properties in Vermont.