NEW YORK, April 6, 2021 /PRNewswire/ -- The international singer-songwriter HERVÉ COEUR (HERVÉ) has turned his talents to the popular song "L'Encre De Tes Yeux" ("The Ink of Your Eyes") by French icon Francis Cabrel. His masterful interpretation of the song was recently released on digital platforms worldwide. The new single lauded by fans has now been followed by a highly anticipated music video.

The idea to record the song was born after a successful performance in New York City and other positive receptions in Paris at L'Olympia, La Cigale, Le Trianon and other French music halls.

First released in 1980, "L'Encre De Tes Yeux" has rarely been produced as an illustrative story in a music video. To put his vision together, Hervé Coeur enlisted the help of Pedro Oberto, a young, talented Venezuelan director he met in his home city of New York. He enlisted further help from Lindsey Donnell and Derek Brockington, two star dancers from the prominent ballet company Dance Theatre of Harlem.

In his representation Hervé Coeur decided to express this classic French chanson against the backdrop of New York City. The song, which recounts the story of a great love that cannot be, takes a contrasting turn in the music video as it trains its lens primarily on the happiness that ensues between the two lovers.

Through the astute suggestion of a friend, Hervé Coeur was able to discover and find inspiration in the work of the beloved French director Francois Truffaut in his masterpiece "Jules et Jim." The film parallels the narrative of "L'Encre De Tes Yeux" of an impossible love immortalized by a happy scene from a bridge. In Hervé Coeur's setting, the viewers find themselves on the iconic Brooklyn Bridge in the midst of a pandemic. We are softly transported among clouds and sunlight, black and white and color, stillness and movement. We also find echoes of another French classic "Un Homme et Une Femme" by filmmaker Claude Lelouch.

"L'Encre De Tes Yeux," where the video features choreography by the singer-songwriter with the help of the dancers, marks his second French release after his self-penned hit POURQUOI.

Link to high-res. photo and portrait of Hervé: https://spaces.hightail.com/space/QVXK0Yzq3V 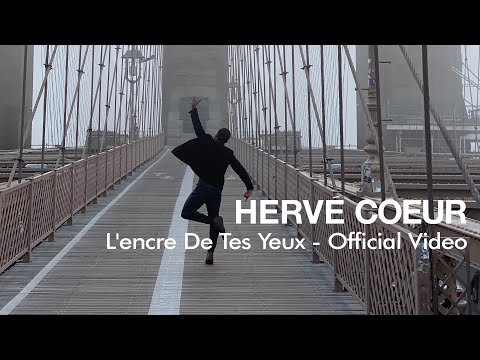