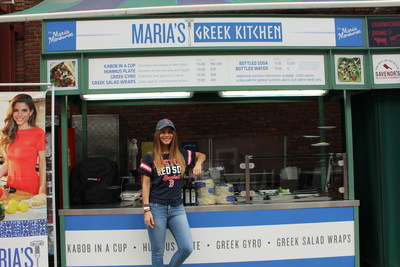 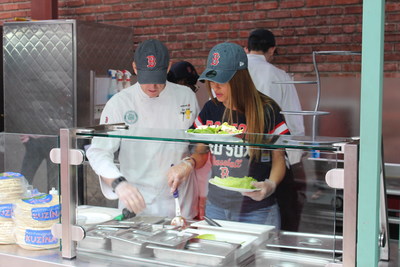 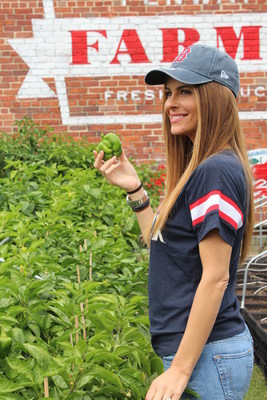 The opening of "Maria's Greek Kitchen" marks a return of sorts to Fenway for Menounos, who grew up in nearby Medford, MA, attended Emerson College in Boston, and sold sausages behind a cart outside Fenway Park, before and after Red Sox games.

A self-professed foodie, Menounos' collaboration with Aramark brings together two of her greatest passions – cooking and Boston sports.

The new concept showcases Menounos' Greek heritage and love of food, and features a line-up of homemade Mediterranean specialties fit for a ballpark, such as gyros, lettuce wraps, hummus plates and kabobs. Located on Yawkey Way, the stand – debuting September 4th -- is a first-of-its-kind for Menounos. The development of "Maria's Greek Kitchen" with Aramark builds on the success and popularity of Menounos' Greek food line, "Maria's Greek Delights."

"I'm blown away to be launching my first brick-and-mortar food venture at, of all places, Fenway Park, the greatest ballpark in the world in my forever home of Boston! I come from a long line of professional Greek cooks, so I feel an obligation to stay true to my roots with authentic recipes and high-quality ingredients," says Menounos. "I also wanted to add even more healthier options for Fenway fans and items that are easy to tote and consume. Working with Aramark, Maria's Greek Kitchen achieves all of that!"

"We're continually working with the Red Sox to develop new and innovative ways to enhance the dining experience at Fenway Park, and Maria's genuine affinity for the Red Sox and great tasting food make this a natural fit," said Carl Mittleman, president of Aramark's Sports & Entertainment division. "We are thrilled to partner with Maria and look forward to this new concept complementing Fenway Park's already diverse menu and distinctive tastes."

About Maria Menounos  As a journalist, Emmy Award Winner, Maria Menounos, holds the distinct honor of having conducted the only interview with the entire Obama family. The interview was touted by ABC News as one of the defining moments leading to Obama's victory. Maria's achievements have thus far set industry milestones. Her groundbreaking conversational style of reporting led her, at the age of 22, to become the youngest person ever to host "Entertainment Tonight." She would go on to do the same for the "Today" show and "Nightly News." The milestones don't end there. Maria is the first person in the history of Hollywood to report for network news and star in a wide-release feature film.

As an actress, on the big screen, she has appeared in "Tropic Thunder", Kickin it Old Skool' and 'the Fantastic Four' Small-screen acting endeavors include guest roles on CBS' "Without a Trace," NBC's "Scrubs" and HBO's "Entourage" as well as a recurring role on the CW's "One Tree Hill." She was also the longest running international spokesperson and face of Pantene hair care products and is the current Host of NCM's 'First Look', the cinema pre-show seen daily on 70% of America's movie screens.

In addition to being a champion of talent, Maria is particularly passionate about helping fellow women young and old. She also loves animals and is avid in pet rescue. A girl who did not speak English until the first grade and one who worked as a janitor cleaning Boston nightclubs throughout her adolescence, Maria is proof that you can come from humble beginnings and succeed. Most importantly, she is proof that you can remain true to yourself, humble and still care deeply for others.

About Aramark  Aramark (NYSE: ARMK) proudly serves Fortune 500 companies, world champion sports teams, state-of-the-art healthcare providers, the world's leading educational institutions, iconic destinations and cultural attractions, and numerous municipalities in 19 countries around the world. Our 270,000 team members deliver experiences that enrich and nourish millions of lives every day through innovative services in food, facilities management and uniforms. We operate our business with social responsibility, focusing on initiatives that support our diverse workforce, advance consumer health and wellness, protect our environment, and strengthen our communities. Aramark is recognized as one of the World's Most Admired Companies by FORTUNE, as well as an employer of choice by the Human Rights Campaign and DiversityInc. Learn more at www.aramark.com or connect with us on Facebook and Twitter.