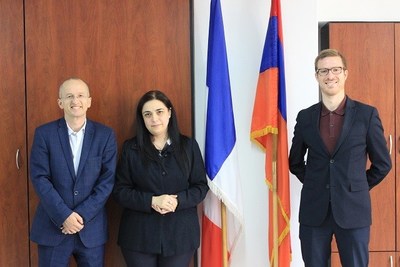 The lab will conduct interdisciplinary research into the crypto-economic implications of blockchain technologies, in collaboration with the university's departments of Finance and Law, as well as the newly formed Department of Informatics and Applied Mathematics. The research will cover topics relating to decentralized application architectures, including smart contract development, bonding curves, token-curated registries, oracle and curation services on the Zap platform, and crypto-economic design patterns.

"The rise of blockchain has ushered in an entirely new ecosystem of commoditized trust," said Nick Spanos, the CEO of Blocktech, who also founded the Bitcoin Center in New York City in 2013, the world's first live cryptocurrency trading floor (prominently featured in the Netflix documentary "Banking on Bitcoin"). "Cryptoeconomics is the umbrella field through which we study human behavior and systems design in our new decentralized world. UFAR is the perfect partner for tackling this vital area of research."

Through the Blocktech-UFAR partnership, students at the university will be able to take courses in blockchain and cryptocurrency, both from technical and business angles, and will be mentored by industry technologists while working on real-world projects.

"Technology is a major priority for the French University of Armenia heading into the next decade," said Kristina Sargsyan, Ph.D., from the Department of Informatics and Applied Mathematics, who is also the university's Program Coordinator for Industry Partnerships. "We are honored to partner with Blocktech given Nick Spanos's pioneering work in the blockchain industry and we are confident that this will expand opportunities for our students tremendously."

The Blocktech team has been deeply embedded in the Armenian technological ecosystem for the past year, dating back to Spanos's first visit to Yerevan in January, when he was invited to speak at the National Assembly of Armenia and at the American University of Armenia, among other forums.

After Spanos's visit, Blocktech opened an office in Yerevan, directed by Peter Mikkelsen, founder of the Nordic Blockchain Association. "The amount of passion for disruptive technologies and permissionless innovation that I have seen in Armenia is tremendous," said Mikkelsen, "especially in the aftermath of the peaceful velvet revolution. This partnership is exactly what is needed at this critical juncture."

The Blockchain Lab at UFAR is the second lab launched by Blocktech this year. Just last week, Blocktech announced its partnership with Taibah Valley to inaugurate the Blockchain Lab at Taibah University in Madinah. Directed by internationally recognized artificial intelligence expert, Professor Walaa Alharthi, it will be the kingdom's first research and development lab dedicated to blockchain technologies.

Academic interest in blockchain technologies has increased significantly over the past year. One recent study found that "42 percent of the world's top 50 universities offer students at least one course on cryptos or blockchain and 22 percent offer more than one." When including classes in cryptography, that number swells to 70 percent.

The French University of Armenia (UFAR), located in Yerevan, is home to 2,000 students eager to collaborate on blockchain-based technologies. Government officials in Armenia have also identified the potential of this technology and have established a "free economic zone" which will soon host a "state-of-the-art technology center." The students are poised to fill and grow this space through the collaborative efforts of Blocktech Lab and UFAR.

This partnership is as symbolic as it is powerful; indeed, it is only fitting that a distributed and decentralized technology would bring about an increase in global interactions and partnerships. The collaboration here, specifically between Blocktech in New York and the French University in Armenia, will not only teach students about blockchain technology and cryptocurrencies, but will provide them immediate projects where they can apply their new education.

Blocktech is an international blockchain venture studio guided by the leadership of Nick Spanos. Our origins date to the founding of the Bitcoin Center in New York City, the world's first live cryptocurrency exchange, located right next to the New York Stock Exchange. At the Bitcoin Center, we have taught thousands of students, journalists, technologists, and finance professionals about cryptocurrency and blockchain technology, Now, through the development of our own projects and technology platforms, we are expanding and pioneering permissionless blockchain innovation all around the world.

Find out more at blocktech.com.

Zap is an oracle curation platform monetized by the ZAP utility token, an Ethereum-based ERC-20 token that powers an oracle marketplace for smart contracts. The platform's mission is to foster the creation of a standardized and self-sustained platform-agnostic smart contract data layer enhanced by the world's best open marketplace for oracles, which connect real-world data to the blockchain, dramatically lowering barriers to entry into the multi-billion dollar alternative data industry and the smart contract ecosystem. The Zap project is managed and directed by the Synapse Foundation, whose mission is to oversee development, increase community engagement, and sponsor participation within the Zap ecosystem.

Find out more at zap.org.