SAN FRANCISCO, Oct. 13, 2019 /PRNewswire/ -- United has officially welcomed a one-of-a-kind, California-themed aircraft livery to its fleet – a Boeing 757 created by a San Francisco resident as part of the airline's national Her Art Here competition. Designed by artist Tsungwei Moo, the eye-catching plane is a tribute to the Golden State where United operates two major hubs – one in Los Angeles and the other in San Francisco – and features quintessential California imagery including sunglasses, palm trees and the Golden Gate Bridge. 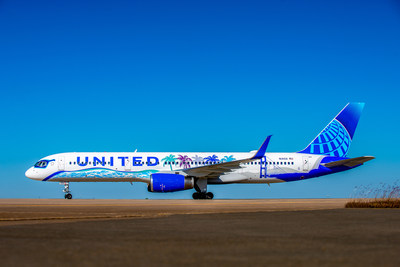 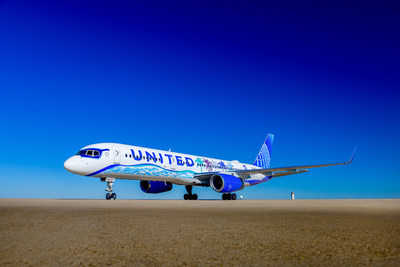 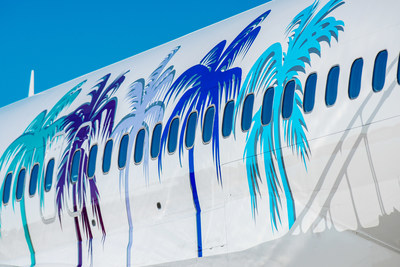 Launched in February, United's Her Art Here contest gave female artists like Tsungwei the chance to use an airplane as their canvas, inspiring women around the world who may be interested in careers in the arts. A labor of passion, Tsungwei's creation was also shaped by her personal journey. The talented artist grew up in Taipei, Taiwan before emigrating to San Francisco 14 years ago aboard a United Airlines flight.

"It's truly a dream come true. The vibrant colors, sunshine and subject matter make it California. I could never imagine one day my art will be displayed on a United Airlines plane which brought me to the United States. There are no culture borders in art and it doesn't matter my status is an emigrant female artist. This plane has its mission now, to bring more joy into people's life, connecting people and uniting the world through experience art," noted Ms. Moo

Before taking to the skies, United's Her Art Here California plane spent time in Amarillo, Texas where it took 17 days for painters to transform the Boeing 757 into Tsungwei's winning design.

For video of the painting process and still images of the aircraft please visit https://app.box.com/s/nz0s3v3u1dwm5dkrhxahppwq6ni6va2r

Her Art Here is the first-of-its-kind contest designed to find and uplift underrepresented women artists by providing a chance to have their work painted on a canvas like no other – a United Airlines aircraft. According to the National Museum of Women in the Arts, while 51 percent of today's artists are women less than 13 percent of art on display in U.S. museums is by female artists. Having their designs painted on a Boeing 757 provides artists with a traveling canvas that flies on average 1.6 million miles a year and 476 cross-country trips. The aircraft is roughly 3,666 times larger than the typical 18" x 24" canvas.

The Her Art Here contest was open to those who identify as a woman, including cisgender, transgender, woman-aligned or non-binary, and reside in the United States, and asked artists to visually represent either New York/New Jersey or California, two key markets for the airline, in their own style, while combining the company's mission and what the communities in each region mean to the artist. Entries were scored by a panel of judges based on contest criteria and winners were determined based on a combination of judging scores and public voting.

In 2019, United is focusing more than ever on its commitment to its customers, looking at every aspect of its business to ensure that the carrier keeps customers' best interests at the heart of its service. In addition to today's announcement, this year United:

United's shared purpose is "Connecting People. Uniting the World." We are more focused than ever on our commitment to customers through a series of innovations and improvements designed to help build a great experience: Every customer. Every flight. Every day. Together, United and United Express operate approximately 4,900 flights a day to 358 airports across five continents. In 2018, United and United Express operated more than 1.7 million flights carrying more than 158 million customers. United is proud to have the world's most comprehensive route network, including U.S. mainland hubs in Chicago, Denver, Houston, Los Angeles, New York/Newark, San Francisco and Washington, D.C. United operates 788 mainline aircraft and the airline's United Express partners operate 560 regional aircraft. United is a founding member of Star Alliance, which provides service to 195 countries via 26 member airlines. For more information, visit united.com, follow @United on Twitter and Instagram or connect on Facebook. The common stock of United's parent, United Airlines Holdings, Inc., is traded on the Nasdaq under the symbol "UAL".