SHANGHAI, Oct. 22, 2019 /PRNewswire/ -- On October 16th, China Eastern has announced its intention to enter into a joint venture with Virgin Atlantic, Air France and KLM, providing more valuable and attractive joint commercial propositions for customers between Europe and China. 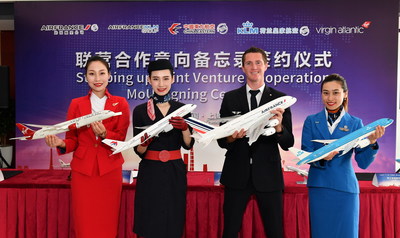 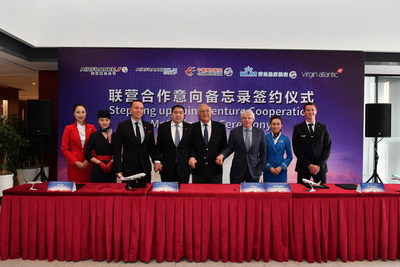 China Eastern currently has joint venture with Air France and KLM by working together on a portfolio of flights between China and Paris, Amsterdam. With Virgin Atlantic joining the existing partnership between China Eastern, Air France and KLM, the enlarged cooperation will offer strengthened customer benefits including increased travel options and optimized connectivity across Europe and China,further facilitated by a developed joint network, as well as competitive joint commercial propositions.

The China to United Kingdom markets are expected to be pivotal at a time where China Eastern and Virgin Atlantic services linking London to Shanghai are part of the mutualized offer. China Eastern plans to seek to codeshare for the first time on Virgin Atlantic services between London and Shanghai. This will open up a range of customer benefits, including the opportunity for customers to earn and redeem miles across both carriers on flights between China and United Kingdom.

The announcement reaffirms China Eastern's commitment to the European market, which will inject new vitality into her international development, network construction and service improvement and will also contribute to the  internationalization of China's civil aviation and the Belt and Road Initiative.

Headquartered in Shanghai, China Eastern Air Holding Co. Ltd (CEAH) is one of the three major air transportation groups in China and could be traced back to the first squadron established in January, 1957 in Shanghai.

As the core business of CEAH, China Eastern Airlines Co., Ltd. (CEA) was the first Chinese airline to be listed on New York, Hong Kong and Shanghai stock markets in 1997. It operates a modern fleet of 750 passenger and cargo aircraft, which is one of the youngest fleets in the world. It has the largest and leading wide-body fleet with internet access. CEA is the first airline in China to allow the use of mobile phones and other portable devices.

As a member of SkyTeam Alliance, CEA has extended its flight network from its core hub Shanghai to 1,150 cities in 175 countries via close cooperation with SkyTeam Alliance member airlines. It serves over 1.3 million travelers annually and ranks top 10 in the world. Eastern Miles members can enjoy the membership rights of SkyTeam's 19 airlines and more than 750 airport VIP lounges worldwide.

China Eastern is committed to creating wonderful journey experiences for passengers around the world with "accurate, delicate and precise" service. In recent years, China Eastern Airlines has won awards both at home and abroad in the field of operation quality, service experience, CSR, etc., including the Diamond Flight Safety Award by CAAC -- highest award of its kind in China, eight consecutive years of Top 50 Most Valuable Chinese Brands by WPP, and four consecutive years nomination of "Global Brand Value 500" by Brand Finance.

Services (Summer 2019 Season)between London and Shanghai by China Eastern and Virgin Atlantic are as follows: