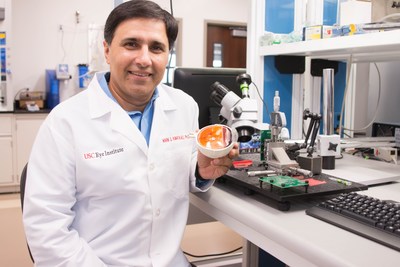 Founded in 2010, NAI Fellows are nominated by their peers and chosen based on their prolific contribution in creating or facilitating outstanding inventions that have made a tangible impact on quality of life, economic development and the welfare of society.

Humayun merges medicine and engineering to focus on developing treatments for the most debilitating and challenging eye diseases and holds more than 100 issued patents and patent applications, most in the area of bioimplants for ophthalmology. Humayun is a USC professor with joint appointments in ophthalmology, cell and neurobiology at the Keck School of Medicine of USC, and in biomedical engineering at the USC Viterbi School of Engineering and holds the inaugural Cornelius J. Pings Chair in Biomedical Sciences. Humayun's most recognized innovation is his co-creation of the Argus II (manufactured by Second Sight Medical Products Inc.), the only FDA approved retinal prosthesis system that allows those with certain blinding diseases to regain some useful vision. Earlier this year, Humayun received the prestigious National Medal of Technology and Innovation, the nation's highest award for technology achievement, from President Barack Obama.

Humayun will be one of 582 NAI Fellows who represent universities, government agencies and non-profit research institutions. He is among eight NAI Fellows from USC, including 2016 inductee Shri Narayanan, professor of electrical engineering and computer science in the USC Viterbi School of Engineering's Ming Hsieh Department of Electrical Engineering. Narayanan also holds secondary appointments as professor of linguistics at the USC Dornsife College of Letters, Arts and Sciences and professor of pediatrics at Keck School of Medicine of USC. Humayun also joins USC President C. L. Max Nikias who became a NAI Fellow in 2012.

"Mark Humayun is such a deserving recipient of this fellowship from the National Academy of Inventors," said C. L. Max Nikias, president of the University of Southern California. "In advancing technology to change medicine, Professor Humayun does not see boundaries, but rather possibilities. He exemplifies American ingenuity and has dedicated his career to preventing and reversing blindness through technological innovation."

"I am honored to be selected a Fellow with the National Academy of Inventors," said Humayun. "My passion has been to merge the power of technology and engineering to create medical breakthroughs. Often these innovations, such as the Argus II which took more than 20 years from concept to FDA approval, come after long periods of research and development and through collaborating with many talented students and colleagues but the results in changing patient lives is worth the wait and hard work. The environment at USC allows me to surround myself with very talented individuals who help make these ideas a reality."

"Mark embodies the spirit of innovation and dedication at the USC Roski Eye Institute by pushing the envelope to create biomedical solutions that will make a transformative difference in people's lives and we congratulate him on this latest honor," said Rohit Varma, MD, MPH, dean of the Keck School of Medicine of USC and director of the USC Roski Eye Institute. "Restoring vision and preventing blindness is Mark's personal 'moonshot' and a mission all the physicians and scientists at USC Roski Eye Institute share. We're proud to have him conducting his research, creating his technological breakthroughs and treating patients at USC and also benefiting patients worldwide."