NEW YORK, Nov. 16, 2017 /PRNewswire/ -- This morning, Green Giant set the GUINNESS WORLD RECORDS title for the Largest serving of green bean casserole at Stella 34 Trattoria, the modern Italian trattoria located inside Macy's Herald Square. The 637 pound serving of the popular Thanksgiving side dish will be shared with nearly 2,000 older New Yorkers through Citymeals on Wheels, a local non-profit which prepares and delivers over 2 million weekend, holiday and emergency meals each year for the city's homebound elderly. 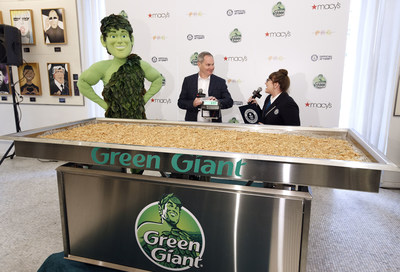 With just one week until the debut of Green Giant in the 91st Annual Macy's Thanksgiving Day Parade® with a spectacular new float, the brand set this GUINNESS WORLD RECORDS title for the Largest serving of one of the most traditional side dishes with the help of the chefs and culinary staff from Patina Restaurant Group's Stella 34 Trattoria, Rowland's Bar & Grill, and Chef Street. The gigantic casserole was made with 780 cans of Green Giant Cut Green Beans, 53 cans of mushroom soup, 32 quarts of milk and 65 pounds of French fried onions.

"We wanted to celebrate our inaugural year in the Macy's Thanksgiving Day Parade by baking up some excitement while helping so many people in this incredible city," said Jordan Greenberg, Vice President & General Manager, Green Giant. "Green Giant has been a staple in Thanksgiving feasts for more than 100 years and we're thrilled to make our mark as the GUINNESS WORLD RECORDS title holder for the largest serving of green bean casserole that will serve 2,000 homebound elderly through Citymeals on Wheels."

"Citymeals on Wheels is grateful to Green Giant for sharing this record-breaking and delicious moment with us," said Beth Shapiro, Executive Director of Citymeals on Wheels. "During the holiday season, many of our homebound elderly neighbors remember celebrations with friends and family from years gone by. We're happy to bring them the traditional dishes they know and love, like this classic green bean treat," she added.

Visit GreenGiant.com for the popular green bean casserole recipe. Follow @GreenGiant on Instagram and Facebook to see behind the scenes photos and video of the record-breaking moment.

About Green Giant Few brands enjoy a heritage as rich as that of Green Giant®. For over 100 years, Green Giant has been devoted to growing the best quality and most unforgettably delicious vegetables for you and your family. For more information and some simple and tasty recipes, please visit www.greengiant.com.

About Citymeals on Wheels Citymeals on Wheels (citymeals.org) provides a continuous lifeline of nourishing meals and vital companionship to New York City's homebound elderly. Working in partnership with community-based organizations and senior centers, Citymeals prepares and delivers over 2 million weekend, holiday and emergency meals for more than 18,000 of our frail aged neighbors each year. Last year, over 21,000 individuals volunteered nearly 68,000 hours of their time.

Since its founding in 1981, Citymeals has relied on the generosity of its Board of Directors, the City of New York, sponsors and other designated gifts to cover administrative costs. This ensures that 100% of all public donations will be used entirely for the preparation and delivery of meals.

About Patina Restaurant GroupPatina Restaurant Group (www.patinagroup.com) is a bicoastal boutique company and leader in the premium segment of the restaurant industry.  In New York, its portfolio features Lincoln Ristorante, STATE Grill and Bar at the Empire State Building, Stella 34 Trattoria at Macy's Herald Square, The Sea Grill at Rockefeller Center, Brasserie 8 ½, The Grand Tier Restaurant at the Metropolitan Opera, La Fonda del Sol at Grand Central, Yellow Magnolia Café at Brooklyn Botanic Garden and The Rink at Rockefeller Center. Other East Coast properties include Tutto Italia Ristorante and Via Napoli at the Epcot World Showcase in Lake Buena Vista, Fla, and Morimoto Asia Orlando at Disney Springs.