OAKLAND, Calif., March 22, 2017 /PRNewswire/ -- Impossible Foods launched its first large-scale production facility today, which could enable the company to make at least 1 million pounds of meat per month, directly from plants, when fully ramped up.

The goal for the East Oakland site is to make enough Impossible Burgers to serve 4 million people per month within a year. The site has the capacity to make 250 times more Impossible Burgers than the company is currently making in its headquarters in Redwood City, Calif., and at a small facility in New Jersey. 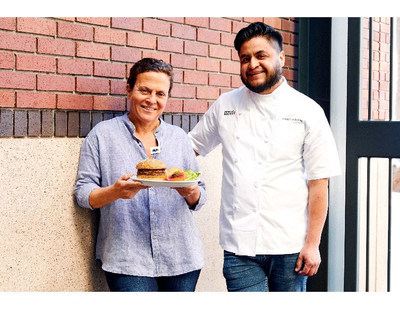 "Our mission to transform the global food system is urgent, and the opportunity is huge, so we are embarking on one of the most ambitious scale-ups of any startup in the food industry," Impossible Foods CEO and Founder Patrick O. Brown, M.D., Ph.D., said today at the inauguration ceremony. "Our goal is to make delicious, sustainable, nutritious and affordable meat for everyone, as soon as possible."

Impossible Foods, which selected Oakland due to its proximity to the company's headquarters across the San Francisco Bay in Redwood City, has already started hiring in Oakland and will continue to do so throughout 2017. The company expects to hire nearly 80 additional employees by the time the 67,000-square-foot plant is running at full capacity.

"As a city with a long and rich manufacturing tradition and a proud history of leading social, environmental and economic justice movements, I'm thrilled to welcome a leading-edge company like Impossible Foods to Oakland," said Oakland Mayor Libby Schaaf. "Their new facility will add to the fabric of Oakland's industrial corridor in East Oakland, bringing job opportunities for our residents and greater sustainability and innovation to our local and global food systems."

In addition, Impossible Foods announced today the hiring of Christopher Gregg as Senior Vice President of Supply Chain and Manufacturing.

Gregg, a manufacturing and supply chain executive with experience in consumer product goods companies including Bare Snacks, Babyganics and Del Monte, will begin next month. Gregg will supervise the continued buildout of the Oakland site, a state-of-the-art modernization of a brownfield factory formerly occupied by the bakery company Just Desserts.

The construction is fully funded by new institutional and individual investors, including San Francisco-based Open Philanthropy Project and Singapore-based investment company Temasek. The investments will also accelerate the development and commercialization of multiple products, in addition to the flagship Impossible Burger.

The Impossible Burger is the world's only burger that looks, handles, smells, cooks and tastes like ground beef from cows -- but is made entirely from plants, with a much smaller environmental footprint than meat from animals.

The Impossible Burger uses about 75% less water, generates about 87% fewer greenhouse gases and requires around 95% less land than conventional ground beef from cows. It's produced without hormones, antibiotics, cholesterol or artificial flavors.

After Oakland is fully ramped up, Impossible will introduce Impossible Burgers in more restaurants, as well as introduce the flagship product in retail and international markets. The company is developing additional plant-based meat and dairy products.

Come and get it: Impossible Burger at new restaurants

Starting tomorrow, the Impossible Burger will debut on the menus of three popular restaurants throughout the San Francisco Bay area:

In development since 2011, the Impossible Burger debuted in July 2016 in New York City at Chef David Chang's restaurant Momofuku Nishi.

In addition, the Impossible Burger is available at acclaimed restaurants Jardinière and Cockscomb in San Francisco, and Crossroads Kitchen in Los Angeles. It's available in New York at the Michelin-starred restaurant PUBLIC and its sister bar, The Daily, and at meat-centric bistro Saxon + Parole.