HOLLYWOOD, Fla., Oct. 25, 2019 /PRNewswire/ -- The iconic Guitar Hotel at Seminole Hard Rock Hotel & Casino has officially opened as part of a $1.5 billion expansion that catapults the integrated resort and casino to world-class status as an unrivaled gaming and entertainment destination. 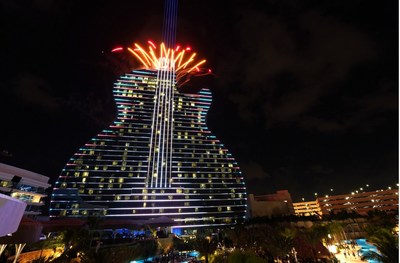 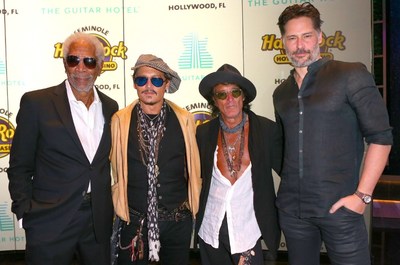 Dozens of A-list celebrities crowded an elevated red carpet at the base of a massive video wall to kick off the grand opening celebration at the Oculus, a stunning design feature at the entrance from a new grand porte-cochere. The Oculus encompasses elements of lush greenery, light and water, choreographed to music.

The signature Hard Rock Guitar Smash signaled the official opening of the expansion including the world's first-ever Guitar Hotel. The Guitar Smash followed greetings of welcome from leaders of the Seminole Tribe of Florida and Seminole Gaming, which own and operate Seminole Hard Rock Hotel & Casino Hollywood.

"The Guitar Hotel will attract visitors from throughout the nation and around the globe," said Jim Allen, CEO of Seminole Gaming and Chairman of Hard Rock International.  "They will experience a world-class entertainment, gaming and dining destination."

The premiere of the Guitar Hotel's show-stopping light show extravaganza followed the Guitar Smash, with a series of orchestrated outdoor music and light shows that capitalize on LED lights built into every side of the Guitar Hotel.  The lights are programmed to change color and intensity, with changes timed to music.  Six fixed high-powered beams of light project at least 20,000 feet into the night sky. The six lights mimic guitar strings of an imaginary guitar neck.

To round out the weekend's festivities in true Hard Rock style, Maroon 5 will be the first to take the stage at the all-new Hard Rock Live on Friday, Oct. 25.

For more information on Seminole Hard Rock Hotel & Casino Hollywood or to book a stay, visit seminolehardrockhollywood.com or call 954.797.5888.

About Hard Rock®:With venues in 75 countries spanning 259 locations that include owned/licensed or managed Hotels, Casinos, Rock Shops® and Cafes - Hard Rock International (HRI) is one of the most globally recognized companies. Beginning with an Eric Clapton guitar, Hard Rock owns the world's most valuable collection of music memorabilia at more than 83,000 pieces, which are displayed at its locations around the globe. In 2018, Hard Rock International was recognized as a Forbes Magazine Top Employer for Women and Land Operator of the Year at the Global Gaming Awards. In 2019, Hard Rock International was honored as one of Forbes Magazine's America's Best Large Employers, Forbes Magazine's Top Employers for Women and No. 1 in J.D. Power's 2019 North America Hotel Guest Satisfaction Study among Upper Upscale Hotel Chains. Hard Rock destinations are located in the world's greatest international gateway cities, including its two most successful flagship properties in Florida and home to the world's first Guitar Hotel® in South Florida, where its headquarters are located. The brand is owned by HRI parent entity The Seminole Tribe of Florida. For more information on Hard Rock International visit www.hardrock.com or shop.hardrock.com.