NEW YORK, May 25, 2018 /PRNewswire/ -- 15 Seconds of Fame (15SOF), the revolutionary technology and social platform that delivers fans their TV and video board moments from live events, won Best in Mobile Fan Experience at the 2018 Sports Business Awards in New York City. 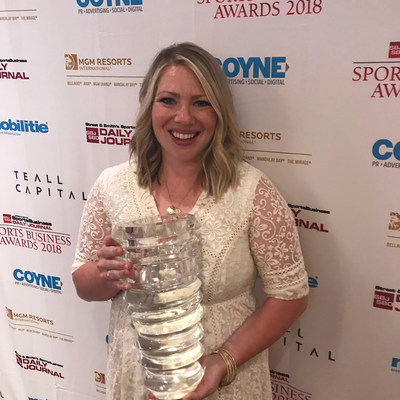 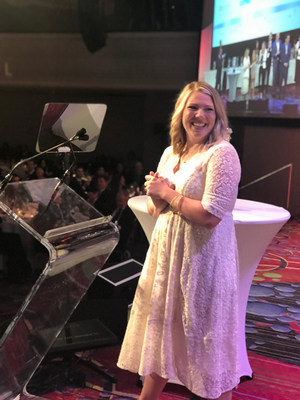 Whitney Collins, a fan from Gilbert, Ariz. who received 15SOF's first delivered video board moment in November 2015 at a Phoenix Suns game, accepted the award on the company's behalf. Collins was 38-weeks pregnant when her nostalgic and entertaining moment went viral. She returned to the Suns' arena this past March, two weeks before the birth of her second child, and received another epic video board moment.

"15 Seconds of Fame gave me two memories, one with each of my children, that will last forever," said Collins in her acceptance speech. "It's an amazing app."

"Thank you to SportsBusiness Journal for it's incredible work in the industry and for recognizing our contributions," said Bruce Cohen, Chairman of 15 Seconds of Fame. "We are extremely proud that we created a solution for fans like Whitney who now have a way to memorialize and share some of the most exciting and precious moments of their lives."

15SOF is currently delivering video board appearances to fans at sports venues through agreements with professional and college teams across the country. 15SOF also has partnerships with MLB, NHL, NFL and NBA to deliver fan moments from every game broadcast. Once fans receive their video board and TV moments, they can instantly share the clips across other social platforms.

For the first time in the event's history, 15SOF delivered fan video board and TV moments at Super Bowl LII, and will do the same next month at the 2018 NBA Finals. 15SOF also made its international debut this year with RCD Mallorca in Spain, and has been showcased at some of the top music festivals in the United States, including Lollapalooza and Austin City Limits.

Fans can download the free 15SOF app using iTunes and Google Play, and can watch fan highlights in the app, on Twitter @15SOF, and on Instagram @my15sof.