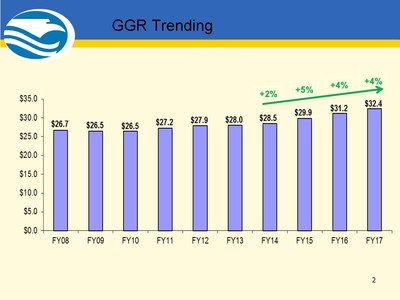 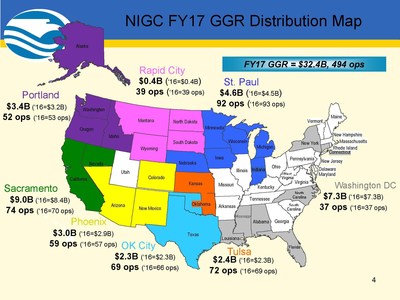 The FY 2017 revenues are calculated from the independently audited financial statements of 494 gaming operations, owned by 242 federally recognized Tribes. The GGR for an operation is the amount wagered minus winnings returned to players. It represents earnings before salaries, tribal-state compacts, and operating expenses.

The annual announcement of Gross Gaming Revenue numbers for Indian Country provides a yearly snapshot of the economic health of Indian gaming. As 2018 marks the 30th year of gaming under IGRA, it is an opportune time to reflect on key policy principles that have helped create the successes of a healthy Indian gaming industry. These policies include:

The preservation of the role of Tribes as the primary regulators and beneficiaries of their operations;

Recognition and utilization of Congress's stated intent and IGRA's built-in flexibility to promote technological innovation, such as the use of electronic aids in class II gaming;

Faithful application of the law that accounts for the unique histories and land-bases of Tribes and IGRA's built-in flexibility to allow Indian gaming on a variety of different types of Indian lands;

And finally, the primacy of the nation to nation relationship between tribes and the federal government and tribes, one that predates the US Constitution.

"All of Indian Country has worked very hard to maintain a flourishing and constantly growing gaming industry," said the Chair of the NIGC, Jonodev O. Chaudhuri. "The successes of Indian gaming in the 30 years since IGRA prove that the foundational principles of federal Indian law should remain at the forefront of any future public policy discussions," he said.

For more detailed data and information such as region-specific information refer to the media center tab under the Public Affairs division on the National Indian Gaming Commission website.

The Indian Gaming Regulatory Act created the National Indian Gaming Commission to support tribal self-sufficiency and the integrity of Indian gaming. The NIGC has developed four initiatives to support its mission including (1) To protect against anything that amounts to gamesmanship on the backs of tribes; (2) To stay ahead of the Technology Curve; (3) Rural outreach; and (4) To maintain a strong workforce within NIGC and with its tribal regulatory partners. NIGC oversees the efficient regulation of 506 gaming establishments operated by 246 tribes across 29 states. The Commission's dedication to compliance with the Indian Gaming Regulatory Act ensures the integrity of the growing $32.4 billion Indian gaming industry. To learn more, visit www.nigc.gov and follow us on Facebook and Twitter.