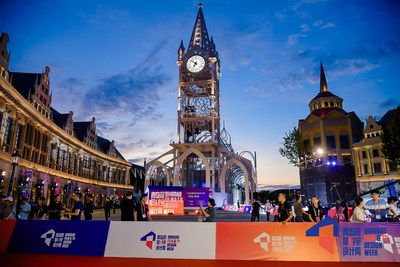 Qingdao was designated by the United Nations Organization for Education, Science and Culture (UNESCO) to join its Creative Cities Network (UCCN) as a "City of Film". The event will further utilize its advantage in the field of film and television design to form a modern entertainment industry cluster from investment, production, distribution and cinema management by exploring industry chains.

Zhou An, Director of the Qingdao West Coast New District, said that 'Design Week' will inspire the innovation vitality of film, design, fashion and other industries in Qingdao and will thus promote the integration of the entire industrial chain to share a sustainable development of entertainment industry in Qingdao.

A highlight of the Design Week is the Global Entertainment IP Developers Conference, joined by cutting-edge film IP developers and designers. Topics discussed cover the entire industry operational chain from the current Chinese IP market ecosystem and dynamics as well as the possibilities of introducing new business models such as developer alliance, copyright bank, commercialization of art design as well as original accessories research and development.

As the Chinese entertainment market ushers in the golden age of IP, industry influencers at the conference focused on how to tell China's story using the growing vitality of IP, the development of entertainment IP, the transformation trend and share IP incubation success stories to discover cross-border expansion.

"The Design Week can bring more talent to the IP industry in Qingdao, establishing a local entertainment cluster with a global outlook," Judy Zhu, Deputy Director of Qingdao Film & TV Design Committee said. "By introducing companies with high potential as well as research institutions, resources and projects, we can create a development of a premium entertainment industry model in Qingdao to drive the coordinated growth of multiple industries," added Zhu.

The conference also released some hot new productions, including the film of The Return of the Condor Heroes directed by Tsui Kark who is regarded by critics as one of the masters of Asian cinematography.

The fashion industry shares a close bond with Design Week. The select movie-themed fashion show featured elements from popular Chinese movies and televisions such as Empresses in the Palace, Ruyi's Royal Love in the Palace and Shadow.

The special movie-themed fashion show re-creates the exquisite costumes from elements originating from iconic films and dramas, showing the collision between modern art and traditional aesthetics. The interpretation and the combination of entertainment and fashion are demonstrated through a display of original costumes.

Qingdao, the largest city of China's Shandong province, is one of the economic centers along the China East Sea. The city, with a population of over 12 million, has formed partnerships with 216 countries and regions with more than 2100 international organization landed. The city has a strong innovation capability in areas such as sea technology, asset management and brand incubation.