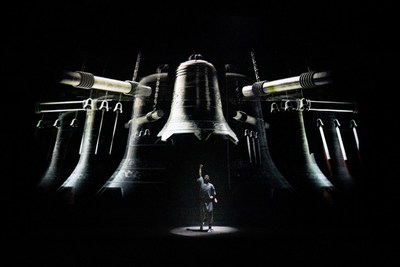 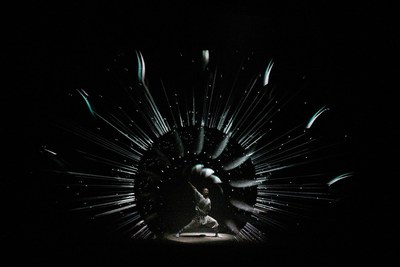 The black, white and gold backgrounds brought the audience into an ink painting on the scene and overwhelmed them with Chinese culture. Every movement of three martial art performers was accompanied with the special high-tech light effects, subverting the past forms of kungfu performances in our mind, and taking the audience to Jin Yong's martial art world.

Songshan Shaolin is known as the birthplace of martial arts. Kungfu has been passed down here for thousands of years and evolved into excellent traditional Chinese culture. This unique creative kungfu performance is based on Shaolin culture and integrates the IP content of the mobile game Demi-Gods and Semi-Devils. It combines modern light technology with martial arts performances to create new cultural experiences of "Interpreting Zen with Martial Arts".

"The world of martial arts without Shaolin school is incomplete. In order to make more people feel the charm of Shaolin martial art, the mobile game Demi-Gods and Semi-Devil worked with Songshan Shaolin Wushu Training Center to make people feel the Shaolin in their mind in a more scientific and technological way, " said the planner of the game Demi-Gods and Semi-Devils.

Nowadays, Tencent is trying to express China's traditional culture in a way more imaginative and artistic, especially when facing the younger generation growing up in the Internet age. The expression should conform to the time so that traditional culture can be accepted and spread by these young people. The kungfu performance show combined the mobile game with martial arts in a more scientific and technological way, which helps the young generation to understand traditional martial arts culture, and to fall in love with it.

In an interview, the person in charge of the Shaolin Wushu Training Center said, "With Tencent, we have attracted young people to know our traditional culture, and made our culture more recognized by the younger generation in modern times, using forms and expressions more conformed to the time."

Through the high-tech and creative presentation with digital IP connecting traditional martial arts, the ancient culture of martial arts was revitalized. The integration of digital IP with traditional culture brings more cultural connotations to the digital industry, realizing the mutual empowerment of digital and culture.

Empowered by Internet Technology, the Chinese City of Chongqing...