BOCA RATON, Fla., Nov. 14, 2018 /PRNewswire/ -- Each year, Forbes ranks the 30 Under 30, an annual encyclopedia of the brashest entrepreneurs across the United States and Canada. For the 2019 edition of the Forbes 30 Under 30, the 4ocean co-founding team of Andrew Cooper and Alex Schulze have been named to the Social Entrepreneur category.

Cooper and Schulze were selected from thousands of nominations. Now in its seventh year, the Forbes 30 Under 30 boasts a prestigious alumni network of 4,000 from across the globe.

Graduates of Florida Atlantic University (FAU) in 2014, the two took a surfing trip to Bali, Indonesia which would ultimately change their lives and the fate of the ocean. Devastated by the amount of plastic in the ocean, they set out to find out why no one was doing anything about this growing problem. Fishermen from a local fishing village were pushing boats through piles of plastics. The two surfers recognized that the proliferation of plastic threatened both the ocean environment and the fishermen's livelihood. Cooper and Schulze realized that they could hire fishermen to pull plastic from the ocean and thus began 4ocean.

Founded in January 2017, 4ocean funds its efforts from the sale of 4ocean bracelets made from recycled materials. Every bracelet purchased removes one pound of trash from oceans and coastlines. In less than two years, 4ocean has removed 2.2 million pounds of plastic and trash from the waterways. Additional 4ocean products include reusable bottle and cleanup combos.

4ocean is unveiling its one-of-a-kind Ocean Plastic Recovery Vessel, a 135-foot vessel outfitted will assist in the gathering of plastic and trash at domestic and international locations by targeting local and land-based coastline issues and tackling coastline plastics, containing them, collecting the, and reclaiming large-scale debris fields in the waterways. The 4ocean OPR Vessel can bring in 310,000 pounds of plastic and trash in one trip alone while small panga vessels can hold four to five supersacks carrying 1,500 pounds.

The Forbes 30 Under 30 for 2019 features 600 youthful visionaries in 20 different industries. 4ocean co-founders Cooper and Schulze are among these entrepreneurial risk-takers embodying a fresh vision, powerful technology and unwavering optimism to create movements to change the face of the world. Of the 2019 honorees, 55% are founders like Cooper and Schulze.

4ocean (www.4ocean.com) is a sustainability brand started by two twentysomething surfers, Alex Schulze and Andrew Cooper, with a vision of cleaning the ocean and coastlines, one pound at a time. Global cleanups are funded entirely through the sale of sustainability products, where every item purchased funds the removal of at least one pound of trash from the ocean. By creating jobs, utilizing the latest technology and raising awareness about the impact of trash in the ocean, the company is building the first economy for ocean plastic and creating a cleaner, more sustainable future for the ocean. 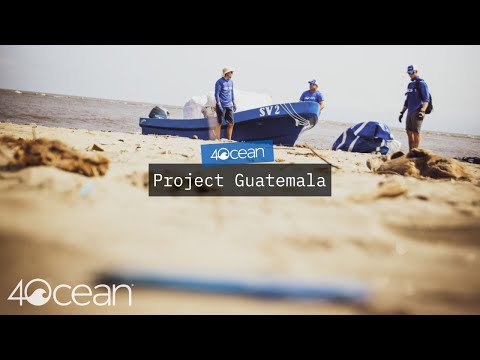