LOS ANGELES, Feb. 8, 2018 /PRNewswire/ -- Americans may be growing more cynical of the political process, the state of the economy, or perhaps of the environment, but that hasn't stopped them from believing in the one thing more fickle than them all: LOVE.

A new national report "The Happiness Index: Love and Relationships in America" commissioned by eharmony and conducted by Harris Interactive, shows that 64 percent of Americans are "very happy" in their romantic relationships with a partner or spouse and nearly 50 percent report being happy with their sex lives. 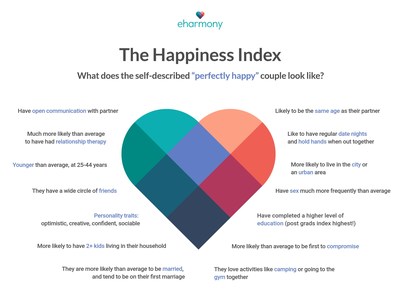 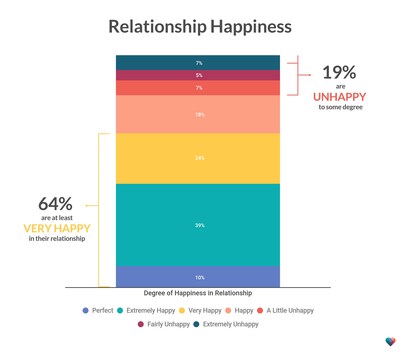 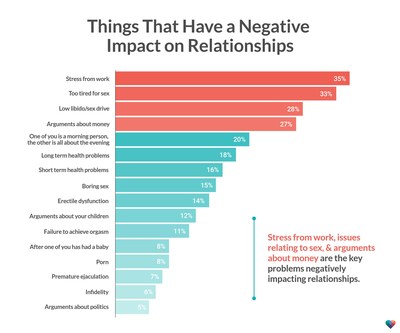 "At eharmony, we talk a lot about happiness in relationships and how to keep them going strong," says Grant Langston, chief executive officer for eharmony. "We wanted to put society to the test and get a sense of how couples are living and loving in America today. Perhaps the most surprising finding is that gender and age dynamics in relationships are evolving, debunking misconceptions long held about both men and millennials."

The new survey reveals that millennials ages 25 to 34 are the happiest in their relationships. Meanwhile, while 19 percent of Americans report being unhappy in their relationships, they are finding it worthwhile to stay together for the long haul: the average length of a relationship is 18 years overall, spiking up to 36 years for respondents over the age 65.

In addition, the survey identified the secrets to success for the 26 percent of respondents who said they were "perfectly happy" in their long-term romantic relationships. Perhaps unsurprisingly, they tended to have taken the time to get to know one another before taking the plunge into marriage, were the same age as their partner or spouse, and had many shared interests, making time for each other even after having children. On the flipside, only six percent of respondents characterized themselves as "desperately unhappy" in their relationships, and were likely to have prioritized companionship over love, lacked intimacy, and were less likely than average to be married.

Key takeaways from the new study include:

How happy are Americans in their relationships?

Love is a huge factor in Americans' overall happiness. A sense of commitment, having a healthy sex life and feeling financially secure are also key factors that directly correlate with happiness.

Why are men and millennials most positive about relationships?

"We're seeing a shift in the way men communicate in romantic relationships," adds Langston. "This is largely being driven by the millennial generation, so it's no surprise that the data reflects this positive change."

While stress from work, being too tired for sex, and money arguments are the key issues negatively impacting relationships, Americans are finding it worthwhile to stick together for the long haul: the average length of a relationship was 18 years overall, spiking up to 36 years for respondents over age 65.

Yes! While women tend to show more signs of daily affection, such as saying "I love you," men are bringing the romance. In fact, they are much more likely to hold hands with their partner, share an intimate kiss, write a love note, take their partner out on date night and even buy small gifts, just because.

The survey found that happiness is greatest for those in a first marriage, while those who remarry tend to get along better with their spouse. Couples with either one child or more than five tend to argue less than those who have two to four.

While approximately three quarters of the happiest people in America are having sex weekly, the data also shows that having sex regularly does not necessarily mean you are happy in your relationship.

While the survey results show a correlation between income and happiness in relationships, nearly three-quarters of Americans still report having a warm and comfortable relationship, with minimal variances across household income.

Want to learn more about the "The Happiness Index: Love and Relationships in America"? Visit https://www.eharmonyhappinessindex.com/ and join the conversation on Facebook, Twitter, and Instagram using #happyinlove.

About "The Happiness Index: Love and Relationships in America" Report

"The Happiness Index: Love and Relationships in America" report was commissioned by eharmony and conducted by Harris Interactive. The survey was fielded online between Nov. 27 and Dec. 3, 2017 with 2,084 online interviews conducted. Participants qualified if they were aged 18+ and were married or in a long-term relationship. Results were weighted to be nationally representative by age and gender.

Los Angeles, California-based eharmony helps people find meaningful relationships that enrich their lives. Founded in 2000, eharmony is a pioneer in using algorithms to create highly compatible relationships based on key dimensions of personality that predict the most compatible, highly successful, long-term relationships. eharmony operates in the United States, Canada, the United Kingdom, Singapore and Australia. For more information visit www.eharmony.com or download the app available on iOS and Android.