ATLANTA, Dec. 22, 2016 /PRNewswire/ -- Aaron's, Inc. (NYSE: AAN), a leader in the sales and lease ownership and specialty retailing of furniture, consumer electronics, home appliances and accessories, this December is giving away 1,435 giant stockings filled with toys and games to deserving families across the U.S. 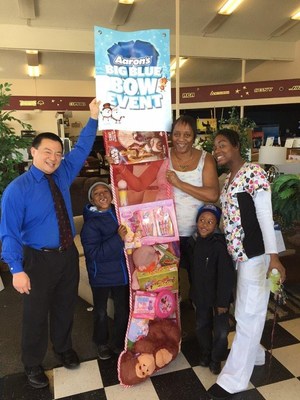 The awarding of eight-foot stockings and toys is part of Aaron's "Big Blue Bow Event," a month-long frenzy of shopping deals and big-prize giveaways. The giant stockings are stuffed with presents, such as wiffle balls and bats, stuffed animals, toy trucks and cars, coloring games, sticker sets, kites, children's tool sets and frisbees.

Winning families were nominated by friends, co-workers or relatives from December 1-15. Nominators were asked to describe "why a deserving family could use a stocking full of toys this holiday," and entries were judged by Aaron's based on appropriateness to theme, enthusiasm, inspiration, broad appeal and message delivery.

Many of the winning entries made for heartwarming stories. A North Carolina woman was nominated by a neighbor because she has a special needs six-year-old grandson and "always helps people before taking care of herself." An Arkansas mother who recently moved from a domestic violence shelter needed "toys for her kids because they just moved with nothing," according to a friend who nominated her.

Another eight-foot stocking recipient was a Tennessee single mother who was praised by her landlord for never complaining about her difficult situation while raising her sons with "respect for all." And there was the nomination of a four-year-old boy from Ohio who was born after the death of his father and is now battling Huntington's disease. The nominator wrote: "I am putting his name in for the prize, knowing this would give him a better Christmas."

"Nothing is more fulfilling for Aaron's than providing joy to those most in need during the holiday season," said John Robinson, CEO of Aaron's, Inc. "We hope these stockings and toys will bring smiles to those who are struggling and especially deserving of some holiday cheer."

As part of the "Big Blue Bow Event" throughout December, Aaron's has been giving away prizes, promotions and incentives to continue its tradition of offering holiday shoppers great lease-to-own deals with flexible payment options, no credit needed and the opportunity to pay off early and save. In addition to the giant stockings, Aaron's will award a grand prize, a new blue 2017 Kia Forte EX with an Approximate Retail Value ("ARV") of $25,810. No purchase is required and everyone can enter at a participating Aaron's store or online at www.Aarons.com/BigBlueBow through December 24, 2016.

Headquartered in Atlanta, Aaron's, Inc. (NYSE: AAN) is a leader in the sales and lease ownership and specialty retailing of furniture, consumer electronics, home appliances and accessories, and currently has more than 1,930 Company-operated and franchised stores in 47 states and Canada.  Progressive Leasing, a leading virtual lease-to-own company, provides lease-purchase solutions through approximately 19,000 retail locations in 46 states. Dent-A-Med, Inc. (DAMI), d/b/a the HELPcard®, provides a variety of second-look credit products that are originated through a federally insured bank.  Aaron's was founded in 1955, has been publicly traded since 1982 and owns the Aarons.com, ProgLeasing.com, and HELPcard.com brands. For more information, visit www.aarons.com.