TORRANCE, Calif., Dec 5, 2019 /PRNewswire/ -- Acura will throw it back to the '90s this weekend with the debut of a restored and reimagined 1997 Acura SLX – the brand's first SUV and first AWD vehicle – at the RADwood Car Show in Orange County on Saturday, Dec. 7. Built specifically for RADwood, the SLX's original 3.2L V6, 4-speed automatic and conventional 4x4 drivetrain were swapped out for Acura's latest and greatest performance technology – a 350-horsepower, race-tuned 2.0-liter VTEC® Turbo, 10-speed automatic transmission and the 4th generation of Acura's torque-vectoring Super-Handling All-Wheel Drive™ (SH-AWD®) system, all sourced from a third-generation Acura RDX. Acura heads to RADwood as the brand celebrates crossing 1-million SH-AWD-equipped vehicles, and over 1.6 million SUVs sold in North America. 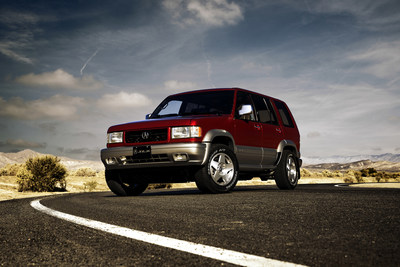 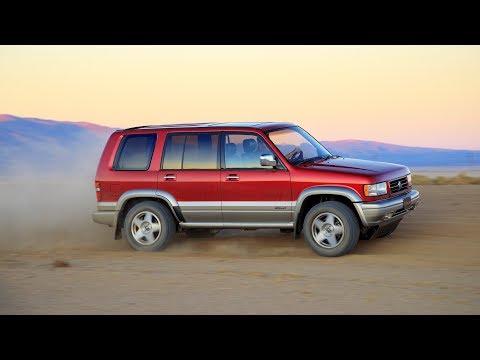 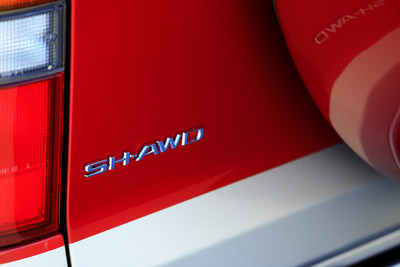 The Acura SLX, developed in partnership with Isuzu, was sold in limited numbers between the 1996 and 1999 model years. It was succeeded by the fully Acura-engineered MDX, and later the RDX, models that have gone on to see tremendous market success, leading their respective segments in sales.

"Acura is an '80s kid, so RADwood is a perfect event for us to display our heritage," said Jon Ikeda, vice president and Acura brand officer. "Nostalgia for '80s and '90s vehicles has grown tremendously, and we're seeing them start to become really collectable. RADwood is always packed with a lot of fun and interesting stuff, so we knew we would have to bring something a little crazy to the table."

To maintain the '90s charm of the Acura SLX, minimal changes were made to the  exterior and interior. The original two-tone paint scheme was updated using Performance Red Pearl and Champagne-Silver, while the original wheels and tires have been swapped out for 17-inch Fifteen52 Tarmac wheels wrapped in Yokohama Geolander A/T tires. Completing the exterior upgrades are a body-color hard shell spare tire cover that replaces the original vinyl cover. Keen observers will notice the SH-AWD badge on the tailgate as one of the few visual cues to what lies underneath. Interior enhancements include reupholstered Milano leather seats and a grey wood applique on the door panels and dash.

The "Super Handling SLX" will be displayed at the RADwood Car Show alongside a 1991 NSX (VIN: 00052) – the earliest known NSX in North America, a 1986 Integra Coupe from the Acura Museum in Torrance, CA and an original (unmodified) 1996 Acura SLX – owned by collector and Acura enthusiast Tyson Hugie.

The RADwood Car Show, founded in 2017 by automotive journalists Bradley Brownell, Art Cevantes, Lane Skelton and Rick Deacon, celebrates the cars and car culture of the 1980s and '90s. While most car shows tend to focus on the exotic and ultra-valuable, RADwood places special importance on the eclectic and the unexpected.

Super Handling ProwessAcura's Super Handling All-Wheel Drive™ (SH-AWD®), first introduced on the 2005 RL sedan, is one of the industry's most advanced torque-vectoring AWD technologies, evolved over four generations and appearing in multiple iterations of the RL, TL and TLX sedans and RDX and MDX SUVs. This year, Acura will surpass 1-million SH-AWD-equipped vehicles sold in the North American market.

The newest and most capable generation of mechanical SH-AWD debuted on the 2019 RDX, boasting 40 percent more torque capacity at the rear axle, quicker front-to-rear torque transfer and 30 percent quicker transfer of torque between the left and right rear wheels.

Humble Beginnings to Market LeadershipIn the early '90s, Acura recognized a large potential for growth in the burgeoning SUV market. The brand launched the SLX in November of 1995, becoming the first SUV from a Japanese luxury automaker. Built for Acura by Isuzu, the SLX offered genuine 4x4 capabilities paired with top-tier luxury accommodations. The SLX allowed Acura to establish an early foothold in the fledgling luxury SUV market, while the brand's first SUV created in-house, the 2001 MDX, was in the early stages of development. Over four model years, Acura sold a modest 6,590 SLXs in the U.S. but gained significant knowledge and understanding of the future SUV market.

MDX and RDX Take the ReignsIn fall 2000, Acura revealed its first fully homegrown SUV, the 2001 MDX, which was met with critical praise, taking home honors as both the Motor Trend and North American SUV of the Year in 2001. Now in its third generation, MDX has gone on to become the best-selling three-row luxury SUV of all time, approaching 1 million units in total U.S. sales.

In 2006, Acura expanded its SUV lineup with the first-generation RDX. A pioneer in what is now luxury's largest segment, the RDX over three generations has been a top performer for Acura, with cumulative sales over 480,000, making RDX the best-selling vehicle in its segment since 2006.

In August of this year, Acura's cumulative SUV sales in North America surpassed 1.6 million units (1,637,420), a testament to the success of the MDX and RDX.

Build Process & TeamThe "Super Handling SLX" reimagining was led by Acura engineers and Pikes Peak racing drivers James Robinson, Paul Hubers and Jordan Guitar. Beginning with a 1997 Acura SLX "donor car," the Ohio-based team separated the body and frame to assess the feasibility of the powertrain swap. With the original SLX's longitudinally mounted 3.2-liter V6 removed, it was confirmed the biggest challenge would be fitting a transverse mounted engine between the SUV's frame rails.

"We knew packaging this new powertrain into the SLX would be tough, and it was," said James Robinson, an Acura powertrain engineer. "But some parts came together much more easily than we had expected. As crazy as it sounds, the RDX's driveshaft went into the SLX without any modifications at all."

To give the exterior appearance a fresh take, Performance Red Pearl, from Acura's current color palette, was selected as the primary exterior color as it nicely mirrors Radiant Red – a color offered on the 1996 SLX. Champagne Silver was chosen for the bumpers, fenders and lower trim – a trademark look for '90s SUVs like the SLX.

The SLX's interior was restored and updated with re-trimmed seats using a dark grey Milano "gathered" leather, and a more modern wood trim for the doors and dash. The original carpet and headliner were reserved, while custom-made Berber floor mats, with Acura logos, were supplied by Lloyd Mats.

The Donor CarThe SLX used for the build, a 1997 model originally painted Fir Green Metallic, was previously owned by Acura enthusiast and collector Tyson Hugie. A lifelong fan of the Acura brand, Hugie still owns his first car, a '94 Acura Legend Coupe that has seen over 572,000 miles and 38 states including Alaska. In addition to the Legend Coupe, Hugie's collection includes a '94 Legend Sedan, a '92 Integra GS-R, and a '92 Formula Red NSX he bought just days before his 30th birthday. His most recent addition, a Radiant Red '96 SLX, replaced the car that became the "Super Handling SLX".

"The SLX was a pivotal move for Acura in the 1990s, paving the way for its future success in the SUV market," said Hugie. "Being able to see Acura retrofit new tech into a classic bodystyle was something I was intrigued about and excited to help with."

Hugie, along with his '96 SLX, make a cameo in the "Super Handling SLX" Flashback Forward video, with Hugie playing himself – a young enterprising collector of vintage Acuras.