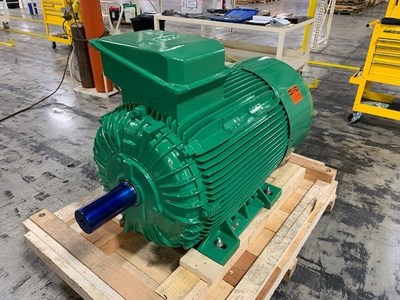 MAXEFF Motor:The Maxeff motor is a combination of two circuits - motor and generator. Whereas the motor circuit is directly connected to power and the generator circuit is 180 phase out. When the motor is connected DOL (Direct On Line), the motoring circuits come into action which draws a lower current since it utilizes only 2/3rd of the winding, limiting higher Inrush current. Once the generator circuit is excited, the motor comes into a full circuit. At that point, the motor's speed is increased which does not demand a high Inrush current and still has higher LRC (Locked Rotor Current). *Refer to Advanced Energy Test Report. As the motor obtains full speed and is stabilized, LRC is settled to a normal rated current like that of a standard motor. See Figure 2.

The switching phenomenon is exclusive to the Maxeff motor as it limits the high Inrush current and still has higher LRC (Locked Rotor Current), as well as torque, as compared to a standard premium motor.

Advantage Over a Standard Motor:

i)         Protection against nuisance tripping of protective devices

iv)        Maxeff motors have lower winding resistance (to reduce I²R losses). Due to its two internal circuits (motor and generator) and its switching phenomenon, it overcomes the high Inrush current compared to that of standard premium motors.

*Advanced Energy Report can be read in its entirety at www.adventechinc.com