DALLAS, Oct. 15, 2019 /PRNewswire/ -- Almost half (48%) of Catapult patients report a previous diagnosis of at least one chronic disease. When obesity is included, that number rises to 66%.

"The 'healthiest' age group includes those under 40 years of age," said Lee Dukes, Catapult's Vice President of Clinical Outcomes. "But they are not quite as healthy as they seem. A fourth of them already have at least one diagnosed chronic health disease, and another quarter are obese. 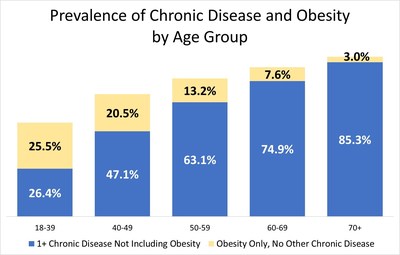 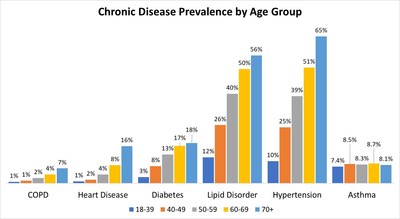 "The fact that prevalence of chronic disease increases rapidly as the population ages is a concern not only for employers, but also for our nation. The federal government is responsible for most of the health care costs for older Americans."

Cost of Chronic Disease in America

Ninety percent of the nation's $3.3 trillion in annual health care expenditures are for people with chronic and mental health problems, according to the CDC. Health care costs for a person with one or more chronic condition are five times higher compared to those without a chronic disease.

Once chronic disease has developed, the best way to control costs is to diagnose it and manage its symptoms. Medication compliance, lifestyle change, and careful monitoring are critical to effective treatment.

The prevalence rates of selected chronic diseases by age groups is represented by the chart above. Rates increase significantly across all diseases except asthma, which most adults developed earlier in life. While those over 60 years old have much higher rates of disease than their younger counterparts, it should be considered that they are likely healthier than most adults of comparable age. Many adults over 60 have retired prematurely due to health issues. This analysis includes adults who are still actively engaged in the workforce.

A Catapult study released earlier this year found that while there is often a correlation between chronic disease and depression, older workers had much lower rates of depression and suicidal ideation than their younger coworkers.

Catapult Health conducts preventive care checkups at the workplace using both onsite and telehealth resources. Patients receive their blood chemistry, depression screening and other test results in real time, in consultation with a board-certified Nurse Practitioner.