Aliro enables software developers using its hardware-independent, cloud-ready platform to take advantage of the power of quantum computing more efficiently and accurately. The platform facilitates the composition and verification of quantum programs, as well as hybrid (classical-quantum) programs and enables their execution on the best quantum hardware for the job. These applications range from molecular simulation (with implications in drug discovery, materials development, and chemistry), financial optimization, quantum machine learning and artificial intelligence, advanced logistics, and more. Aliro's software lowers the barrier to entry for businesses that are ready to discover the increased potential that quantum computing offers.

Aliro's software is designed with a "write-it-once-run-anywhere" mentality. Now, current quantum computer users, as well as the next generation of quantum developers, will have access to a development and execution platform that abstracts away the hardware-specific software and hardware optimizations (such as differing instruction languages and dynamically changing physical noise characteristics for different devices) from the software developer. In addition, Aliro will be providing a suite of technical tools (to users both up and down the stack) such as validation schemes, visualizations, benchmarks, error-correcting codes, application-specific interfaces, and general performance improvements all in a unified platform.

According to research by the Boston Consulting Group, in the coming decades, productivity gains by end-users of quantum computing, in the form of both cost savings and revenue opportunities, will surpass $450 billion annually. There is a proliferation of quantum computing hardware technologies such as superconducting circuits, trapped ions, photons, cold atoms, etc. Accordingly, there is the need for a software stack that provides hardware independence and optimizations from the algorithm all the way down to the hardware.

"I have been working with the Aliro team for the past year and could not be more excited about the opportunity to help them build a foundational company in quantum computing software," said David Aronoff, General Partner at Flybridge. "Their innovative approach and unique combination of leading quantum researchers and a world-class proven executive team, make Aliro a formidable player in this exciting new sector."

"We were attracted to Professor Narang and her team by their impressive backgrounds and the depth of their research into quantum computing," said Matt Bigge, Partner at Crosslink Capital. "We believe that Aliro's unique software products will revolutionize the field, by hastening the inflection point where quantum becomes as accessible as classical computing. This could have implications for drug discovery, materials development, chemistry, machine learning, and logistics."

Aliro was co-founded by Prineha Narang, Assistant Professor at the John A. Paulson School of Engineering and Applied Sciences at Harvard University and a luminary in the quantum computing space. Professor Narang has been honored as one of Forbes' "30 under 30 in Science", as well as MIT Tech Review's "35 under 35 Innovators." Narang came to Harvard as a Ziff Environmental Fellow at the Harvard University Center for the Environment to explore the new field of excited state quantum materials and devices. She was also a Research Scholar in Condensed Matter Theory at the MIT Department of Physics, working on new theoretical methods to describe quantum interactions.

About Aliro: Aliro Technologies, a spin-out of Harvard's Quantum Information Sciences Lab, makes software that facilitates accessibility to present-day quantum computers. It offers a hardware-independent platform for developers to write quantum software and helps optimize it according to the specific details of the device, or, conversely, selects the device that maximizes a program's performance. Aliro's software lowers the barrier to entry for businesses that are ready to discover the amazing potential that quantum computing offers. For more information, visit Aliro's website. 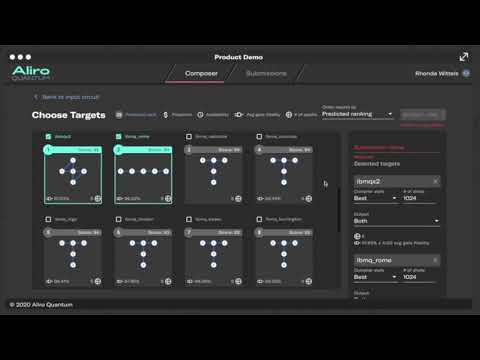 Aliro Surges Ahead As The Leader In Quantum Network Technologies...