WASHINGTON, Oct. 5, 2017 /PRNewswire-USNewswire/ -- Ted Danson's career may have been at a peak playing the shallow, philandering bartender Sam Malone in Cheers, one of the most beloved TV shows of all time. But when he officially closed the "bar" in 1993, his personal life was approaching a nadir.  In an exclusive interview with AARP The Magazine (ATM), the Emmy-award winner, now 69, shares why his happiest years have come after his hair went gray. Danson reveals his secrets to making the second half of life the richest part by finding balance, whether it's accepting that life will be messy, fighting fear with gratitude, or embracing the challenges of work when many of those around you are younger. 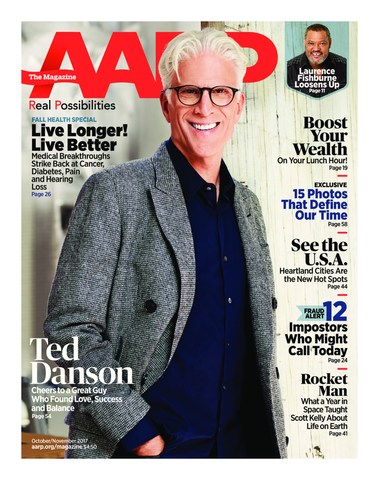 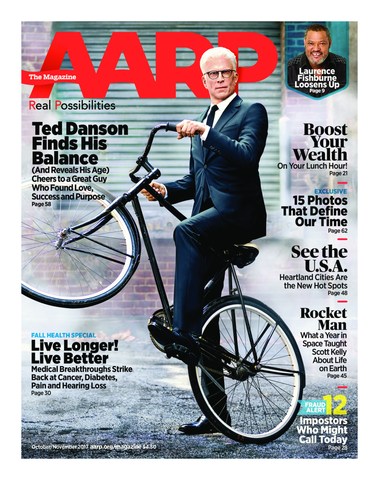 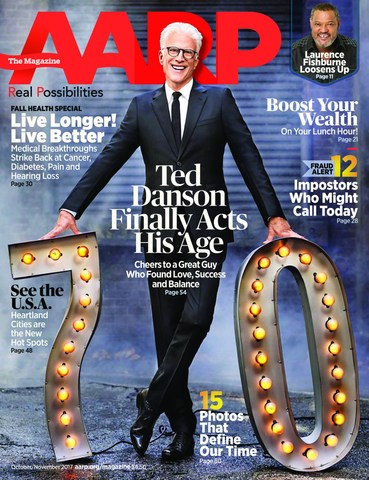 "It's like, the coach still puts you in the game, but you have to stay up later and work harder. That's cool," says Danson.The actor also reveals to AARP his personal thoughts on aging; the deep connection and devotion he has to his wife, Mary Steenburgen; and his secrets to late-career success. Plus Danson discusses how Mary has helped him overcome the daily anxieties he has faced much of his life, from finding jobs to keeping his family happy and healthy.

The following are excerpts from the October/November issue of the ATM cover story featuring Ted Danson, available in homes starting October 1st and available online now at www.aarp.org/magazine/.

On his secret to late-career success "My philosophy is, don't hang on to whatever degree of success or celebrity you have," he explains. "Find the smartest people you can and work with them, even if it means taking a smaller role. Get lost in something that inspires you. Find the people who can make you a better person. That's how you stay fresh."

"In my case, I'm working with the most creative people in the world, and they have a project they just have to do—come hell or high water. I want to be part of that. If some writer gets hired to make something for Ted Danson, they won't have the same degree of creative passion. If you're Seinfeld or somebody like that, you can do it, but if you're just an actor for hire like me, you need to go find the best play to be in."

On accepting that life will be messy "If I had made one step differently or corrected my mistakes – which are cringers – would I take that away if it were to alter anything about where I am now? No.  Life is just messy.  The older I get, the more I see it's OK to be imperfect.  Because you can still grow and make changes in your life.  It's not like you're finished at 70 or 75."

Ted on Aging "Age is a marker, but it's not everything," he says.  "What we're capable of has a lot more to do with our determination, our creativity and our passion than the number of candles on the cake. While you're living your life, it really doesn't mean that much unless you allow it to."

"When you're getting older, you definitely bump into 'I'm diminishing,' but that's usually what you think about when you're in the middle of a passage, not when you've landed into whatever the new age is. When you're 37, you go, 'Oh my god, I'm not 25 anymore. How horrible.' Then you're 55, and you go, 'I hope I'm still relevant. I hope I can still run with the bulls.' Then you get past that, and you start to really enjoy being around younger people. You're not competitive anymore. You just kind of marvel."

On his relationship with his wife "I like the way Mary laughs and smiles," he says. "I like her willingness to say yes to leap off tall buildings of life.  I love her sense of fairness and right and wrong.  And I don't think you're supposed to say this when you're almost 70, but she's very sexy."

Actress Kristen Bell on Ted and Mary's relationship "It's almost intimidating spending time with Ted and Mary because of how solid and loving and connected they are," says Kristen Bell, Danson's costar in The Good Place. "Honestly, it's beautiful how they obsess over each other."

On his friendship with Bill and Hillary Clinton The guest list at Danson and Steenburgen's 1995 wedding on Martha's Vineyard included Tom Hanks, Woody Harrelson, James Taylor and Laura Dern, and a pair of old Arkansas pals of Steenburgen's named Bill and Hillary. Ted and Mary and the Clintons frequently see each other, but it's rarely to discuss politics. "We talk about anything and everything," Danson says, "but mainly it's Mary and Hillary talking about movies and books and now mostly grandchildren."

On working through his anxiety Danson credits Steenburgen with helping him quiet down an undercurrent of anxiety that no level of fame or success can quite squelch.

"There's always fear, and it's all the human stuff," he says. "Jobs, work, money, kids, health. Usually, when I have a fearful thought, I flip it into gratitude.  Like, if I think, Oh dear, where's Mary? She's not home. Something must have happened, I tell myself, Thank God I have the opportunity to be married to a woman whom I love so much. Because that love is what makes me afraid that she might be hurt or something. I tell myself, Aren't you lucky?"

On the value of money "The unspoken message I got as a child was that we had nothing," he says. "We didn't have TVs, I looked like a ragamuffin. My clothes were all hand-me-downs. My dad worked and there was enough money for the necessities, but getting more and more money was never a goal.

"My philosophy is that you are a tube for money," he says. "It just comes through you, and as long as you don't panic, stay happy and grateful, appreciate what you have and know what you want to do, it'll come."

About AARP The Magazine With more than 37 million readers, AARP The Magazine is the nation's largest circulation magazine – and the definitive lifestyle publication – for Americans 50 and older. AARP The Magazine delivers targeted content in three demographic versions – for readers age 50 to 59, 60 to 69 and 70-plus – including health and fitness features, financial guidance, consumer information and tips, celebrity interviews, and book and movie reviews. AARP has been publishing a magazine for members since its founding in 1958. AARP The Magazine is published bimonthly in print and continually online. Learn more at www.aarp.org/magazine/.

About AARPAARP is the nation's largest nonprofit, nonpartisan organization dedicated to empowering Americans 50 and older to choose how they live as they age. With nearly 38 million members and offices in every state, the District of Columbia, Puerto Rico, and the U.S. Virgin Islands, AARP works to strengthen communities and advocate for what matters most to families with a focus on health security, financial stability and personal fulfillment. AARP also works for individuals in the marketplace by sparking new solutions and allowing carefully chosen, high-quality products and services to carry the AARP name.  As a trusted source for news and information, AARP produces the world's largest circulation publications, AARP The Magazine and AARP Bulletin. To learn more, visit www.aarp.org or follow @AARP and @AARPadvocates on social media.