The ACS continues to support efforts to prevent patients from receiving surprise medical bills and keeping patients out of the middle.

"Surgeons do not want their patients to bear the consequences of the narrowing of networks and other gaps in insurance coverage that lead to surprise medical bills. However, the solutions should not come on the backs of the physicians caring for the patients," said David B. Hoyt, MD, FACS, Executive Director of the American College of Surgeons.

Throughout this process, the ACS has expressed major concerns with federal rate setting as a default payment for out-of-network physicians that is benchmarked to the median in-network payment rate as included in this bill. There are various ways this idea is being applied, but no matter how it is being used, accepting an insurer-dictated, federally benchmarked rate to resolve the issue of surprise medical billing could have a profound long-term effect on all physician payment, for both in-network and out-of-network physicians.

The ACS is also troubled by the fact that the Lower Health Care Costs Act bypasses an independent dispute resolution (IDR) process to avoid the associated costs. The ACS believes that a viable solution to the issue of surprise billing must strike a careful balance, allowing physicians and insurers to negotiate a final payment through an IDR, while completely protecting patients from unanticipated medical bills. IDR brings both parties to the table equally. Avoiding IDR provides unfair power to the insurers. The use of IDR has proven effective in the states, particularly the New York model serving as the prime example.

The ACS believes that Congress needs to continue to work with all stakeholders to resolve the issue of surprise medical billing in a way that does not hold patients accountable.

"The ACS is asking that members of Congress carefully think through solutions like rate setting which will open the door to large scale health care reform discussions in a way that warrants much further debate. Congress should consider the large-scale consequences for the U.S. health care system as a whole before applying such sweeping solutions," said Dr. Hoyt.

About the American College of SurgeonsThe American College of Surgeons is a scientific and educational organization of surgeons that was founded in 1913 to raise the standards of surgical practice and improve the quality of care for surgical patients. The College is dedicated to the ethical and competent practice of surgery. Its achievements have significantly influenced the course of scientific surgery in America and have established it as an important advocate for all surgical patients. The College has more than 82,000 members and is the largest organization of surgeons in the world. For more information, visit www.facs.org.

American College of Surgeons calls on Congress to stop harmful... 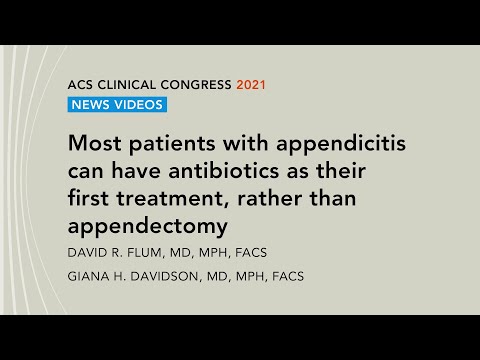 Most patients with appendicitis can have antibiotics as their...