NEW YORK, March 1, 2021 /PRNewswire/ -- A recent survey of U.S. citizens conducted by Kekst CNC, a leading global strategic communications firm, assessed Americans' thoughts on reopening the economy, the strength of the Covid-19 vaccine rollout, confidence in government institutions, and how businesses are responding to the pandemic. 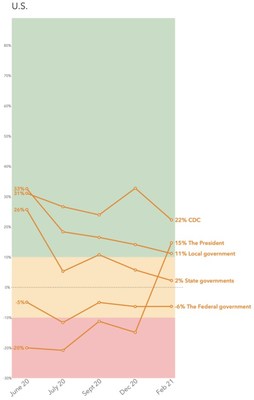 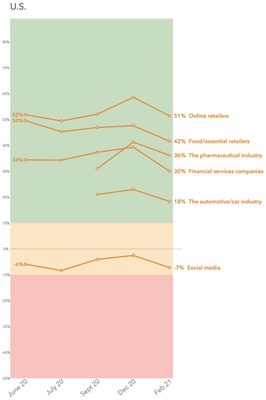 According to James Johnson, Senior Advisor for Research at Kekst CNC, "As the United States continues down the path toward full reopening, Americans are watching the vaccine rollout closely to determine when restrictions may be lifted. Our study indicated that 36% of respondents feel the rollout is going poorly, and 41% feel it is happening too slowly."

Despite 34% of respondents highlighting a need to prioritize the economy over slowing the spread of COVID-19, 48% of Americans indicated they would only feel comfortable fully lifting restrictions when most adults in the world had received the vaccine. Generally, Americans indicated an interest in loosening many restrictions, but keeping some in place.

Johnson noted, "In addition to highlighting the widespread need for vaccinations to remove COVID-19 restrictions, 64% of respondents showed an increased willingness to take the vaccine, up from 58% in December. While confidence in the vaccine has grown, only 36% of respondents indicated that they are comfortable removing restrictions for people who have received the vaccine more quickly than those who have not."

"While the past year has been challenging in many ways, Americans continue to show a preference towards Working From Home. American respondents indicated a 24% net increase in job performance, a 19% net increase in concentration while working, and an 8% net increase in happiness at work. These numbers were by far the highest of any market surveyed, with every other market besides Sweden reporting net decreases in these indicators," concluded Johnson.

In assessing the positive and negative impacts of certain industries during the pandemic, all sectors saw a decline in approval from December of 2020. Despite this, online and food/essential retailers continued to receive relatively high net approval ratings of +51% and +42%, respectively. Of all industries included, only the social media sector held a negative approval rating, which it has done since the survey began.

Comparing the U.S. to the other countries surveyed: