AMHERST, Va., Oct. 8, 2020 /PRNewswire/ -- In conjunction with the announcement that Louisiana Attorney General Jeff Landry has persuaded authorities of several parishes not to accept funds from a well-funded, left-wing organization, and that he is filing suit to prevent this in the future, Phill Kline, Director of the Amistad Project of the Thomas More Society, issued the following statement. The Amistad Project is supporting lawsuits, first filed weeks ago, in nine battleground states, including Michigan, Minnesota, Pennsylvania, and Wisconsin, and several others -- with similar objectives to those of Attorney General Landry.

"The Center for Tech and Civic Life (CTCL), using $250 million from Facebook Founder Mark Zuckerberg, is engaged in an insidious, coordinated, and stealth campaign to manipulate this year's elections. CTCL is selectively funneling large amounts of money to municipal authorities in areas that vote overwhelmingly Democratic so that voter turnout in these areas increases to influence the outcome of the election in critical battleground states. Private funds cannot and should not be used by public officials to determine election results.

"Kudos to Attorney General Landry for his courage and grit in standing up to Mark Zuckerberg and his political allies to ensure the integrity of Louisiana's election. State election boards and authorities are the umpires of voting. They must be fair, impartial, and independent. When a private, outside party directs their funds to heavily Democratic municipalities only – spending $250 million to do so -- it is inherently manipulative and dangerous to election integrity.

"CTCL's actions are highly problematic in battleground states, such as Michigan, Minnesota, Pennsylvania, and Wisconsin. Voters have filed lawsuits in these states and many others to compel the fair and impartial management of elections."

The Amistad Project, a project to preserve civil liberties, is an initiative of the Thomas More Society, a not-for-profit national public interest law firm. For more information on this and related issues, go to: got-freedom.org. 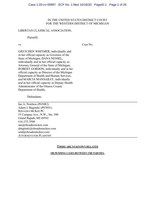 The Amistad Project: Zuckerberg Needs To Be Transparent About...