ANAHEIM, Calif., Sept. 26, 2017 /PRNewswire-USNewswire/ -- The Anaheim Convention Center (ACC) today unveiled the largest and most significant expansion in nearly two decades – ACC North. The seventh expansion adds 200,000 square feet of flexible meeting space, allowing for a variety of event uses under one roof in one of the nation's premier destinations. 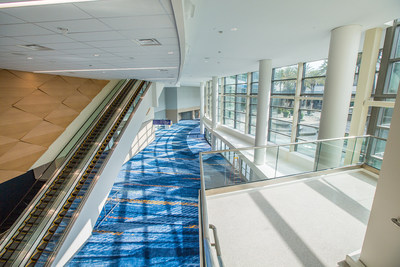 The new building cements the Anaheim Convention Center as the largest convention center on the West Coast and allows the center to grow with its largest shows as well as meet the needs of today's diverse and dynamic meetings and conventions. Designed in conjunction with Populous architectural firm and Turner Construction Company, the ACC North's design enables today's meeting professionals to craft a truly customizable experience for attendees including, education sessions, workshops, galas, marketplace connections and networking events.

"This is a transformative event for the Anaheim Convention Center," said Tom Morton, executive director of Anaheim's Convention Sports & Entertainment Department. "Not only is this our largest expansion since 2000, it is one of the most significant in terms of the features and innovation it brings to Anaheim."

"This is a historical moment for the Anaheim Convention Center and the City of Anaheim," said Jay Burress, president & CEO, Visit Anaheim. "ACC North delivers on the vision we had to build a modern, expansive space that can be completely customizable for a variety of industries and meeting planner needs. This beautiful new space considerably adds to our client offerings and ability to attract more groups to choose Anaheim."

Anaheim Convention Center currently hosts an average of nearly one million attendees a year. ACC North has already had 75 definite meetings and conventions bookings. The first groups include American Heart Association, Oncology Nursing Society, Society for Science & the Public and International Society for Technology in Education. With the addition of the new building, Anaheim Convention Center will officially join the "1 million-square-foot-club," becoming the 11th largest convention center in the U.S.

ACC North by the Numbers

ACC by the Numbers

About Visit Anaheim: Founded in 1961, Visit Anaheim is a 501(c)(6) nonprofit destination marketing organization. Visit Anaheim's mission is to develop, promote, market and sell the destination as a premier visitor destination benefiting the economic vitality of the local community. In 2017, the Anaheim Convention Center, the largest convention center on the West Coast, is celebrating its 50th anniversary and ACC North, a 200,000 square foot expansion. To learn more about Visit Anaheim, visit: www.visitanaheim.org follow on Facebook, Twitter, Instagram and LinkedIn.