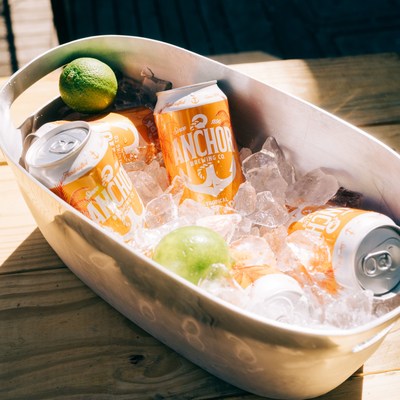 "It's an exciting moment for the entire team at Anchor to introduce these incredible, hand-crafted beers to our fans during our brewery's historic 125th year," says Pilot Brewer Dane Volek, who leads Anchor's innovation team. "We've spent the past year perfecting each beer inspired by feedback and conversations with guests who previously would join us at our Public Taps tasting room in San Francisco to try our experimental styles. As we enter into the spring, we look forward to seeing our fans enjoying outdoor adventures with these new beers by their side."

Each beer is hand-crafted by Anchor's brewing team at the iconic brewhouse in San Francisco using top quality hops and ingredients that showcase Anchor's on-going commitment to producing standout beers. While the Tropical Hazy IPA (6.5% ABV) is the brewery's first distributed Hazy IPA, the brewing team has debuted highly successful Hazy IPA's at Public Taps throughout the years, helping to refine the final recipe for this release. The beer captures the spirit of tropical getaways with fresh aromas of pineapple, guava, papaya, passionfruit, and mango balanced by complex layers of vibrant hops. With its smooth and crushable profile, the Tropical Hazy IPA pairs well with bold food, while inviting the consumer to take a mental vacation whether enjoyed over Thai takeout at home or around a bonfire at the beach.

Brewed with San Francisco's incredible water from the glacial Hetch Hetchy reservoir in Yosemite, Anchor's Crisp Pilsner (5.0% ABV) is sunshine in a glass with its bright gold, brilliantly clear appearance and undeniably refreshing profile. As a steward of classic beer styles, Anchor's team aspired to honor the tradition of Pilsners with a nuanced brew produced with finesse. Floral notes are balanced by fresh herbal noble hops for a crisp and clean finish, and drinkers will uncover layers of smooth malt, honey, mild minerality and subtle hop bitterness while sipping this crowd-pleaser. True to its name, the Crisp Pilsner invites outdoor adventures at the coast, encapsulating the feeling of that first bracing chill when stepping into the Pacific Ocean.

"Little Weekend" (3.7% ABV), boldly announces Anchor's dedication to forward-thinking innovation during its anniversary year. The 100-calorie brew bursts with juicy mango flavor, an expression of Volek and team's research to perfect a light, low-ABV beer that doesn't weigh the consumer down, but still tastes like a beer should. The mango-forward profile is balanced with notes of tart tropical pineapple and a light malt backbone that lend depth to the brew that finishes crisp and dry. Inspired by the spirit of getting outdoors in Anchor's San Francisco hometown, "Little Weekend" is a beer made for the moments when consumers don't want to be weighed down, such as a day at the park, beach or hiking trail.

"Over the years, we've seen an increased demand among drinkers and our fans at Public Taps for lighter beers that are full of flavor, but don't slow you down. I whole-heartedly enjoy this crisp and clean style and see lighter beers as an exciting challenge to craft something that, in its simplicity, reveals a great deal of brewing finesse," says Volek. "I couldn't be more proud of where we landed with 'Little Weekend, our first 100-calorie beer release.'"

All three beers are offered as cans with a suggested retail price of $9.99/six-pack. They join Anchor's classic and time-honored portfolio that includes Anchor Steam®, California Lager, Liberty Ale and Anchor Porter. With their rolling release on February 22nd, Tropical Hazy IPA, Crisp Pilsner and "Little Weekend" will be available nationwide with predominance at CA retailers and partners. Bay Area locals can additionally order 6-packs for pick-up from Anchor's Public Taps Beer to Go location via AnchorBeertoGo.com.

About Anchor Brewing CompanyEstablished in San Francisco in 1896, Anchor Brewing Company is America's first craft brewery, persevering through earthquakes, fires and the Prohibition era. In 1965, Anchor's new owner Fritz Maytag revived the brewery for a new era, charting a course that was foundational in the craft beer movement. During this time, Anchor reinvented its now classic Steam Beer, introduced the first American pale ale and pioneered new brewing practices—such as dry-hopping—that are still used industry-wide today. As a proudly unionized brewery, Anchor now has a growing portfolio of beers including complex ales, refreshing IPAs, and iconic classics such as Anchor Steam®, Liberty Ale, Anchor Porter and Christmas Ale. As always, Anchor Brewing remains committed to innovation while crafting iconic beers that stand the test of time. To learn more, visit www.anchorbrewing.com, and follow Anchor Brewing on Instagram Twitter and Facebook.