RELEASED ON SUGAR/DECCA RECORDS ON NOVEMBER 13, 2020 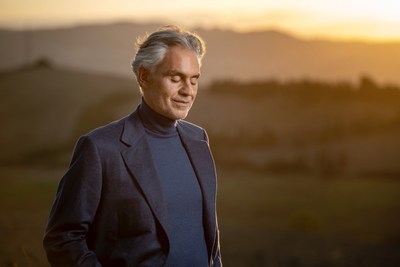 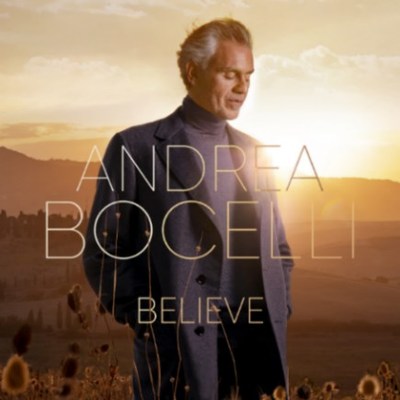 World-renowned Italian tenor Andrea Bocelli is set to release his breathtaking new album, Believe, via Sugar/Decca Records on November 13, celebrating the power of music to soothe the soul. He is joined on the record by Alison Krauss, the most awarded singer in Grammy history, for a powerful and emotional rendition of 'Amazing Grace'.

It follows Bocelli's record-breaking 'Music for Hope' performance at Easter from the historic Duomo cathedral in Milan which was watched live by millions around the globe. The new album also features two duets with leading opera singer Cecilia Bartoli, a previously unreleased track from the late, great Italian composer Ennio Morricone, as well as 'Gratia Plena' – the closing song from the critically acclaimed new movie, Fatima.

The themes explored in this new recording are deeply personal to Bocelli, who says, "The concept behind 'Believe' is based on three words: faith, hope and charity. These are the three theological virtues of Christianity, yet – quite independently of any religious belief – they are also the three extraordinary keys to giving meaning and completeness to the lives of every one of us."

Adding her distinctive vocals to 'Amazing Grace' is 27-time Grammy Award winner Alison Krauss, one of the most important artists in the American country-bluegrass tradition. Describing her collaboration with Bocelli, Krauss commented: "What an amazing experience! Fantastically terrifying!"

Bocelli's solo rendition of 'Amazing Grace' beautifully concluded his 'Music for Hope' performance earlier this year. As one of the biggest musical live stream performances of all-time and with over 2.8 million peak concurrent viewers, it achieved the largest simultaneous audience for a classical live stream in YouTube history. The video received more than 28 million views from across the globe in its first 24 hours.

Believe, co-produced by Steven Mercurio and Haydn Bendall, is a collection of uplifting songs that have inspired and sustained Bocelli over the years. In addition to the duets with Krauss and Bartoli – two singers whose distinctive voices are celebrated around the world – there is a new composition from Ennio Morricone, a long-time collaborator of Bocelli's, titled 'Inno sussurato' ('Whispered Hymn'). There are also familiar favourites on the album, such as 'Hallelujah' and 'You'll Never Walk Alone'.

Bocelli has composed his own settings of 'Ave Maria' and 'Padre Nostro' specially for this record. He says, "I don't consider myself to be a composer, however, I am a musician, and sometimes melodies come to my mind, with essentially complete harmonies... Music that knocks on the door of my soul and which I gladly welcome and then set free by putting pen to paper". There are also melodies like 'Mira il tuo popolo' which take him back to when he was a boy, growing up in Tuscany. "They represent the soundtrack to my childhood memories," he says.

One of the hidden gems on Believe is 'Fratello sole sorella luna (Dolce è Sentire)' – a song featured in the Franco Zeffirelli film Brother Sun, Sister Moon – with music composed by Riz Ortolani. Another delight is 'Angele Dei' – a newly-discovered piece by Puccini, arranged by Michael Kaye, which Bocelli premiered in 2019. It was originally written without lyrics, so Bocelli asked for words of a prayer (addressed to a guardian angel) to be added.

Musically gifted from birth, Andrea Bocelli is one of the most celebrated singers in modern history, performing at major international events including the Olympic Games and the World Cup, as well as his own sell-out arena shows around the world. He has a Golden Globe, seven Classical BRITs and seven World Music Awards under his belt, plus a star on the Hollywood Walk of Fame. His previous album, Si, reached No.1 on both the US and UK charts.

With a decorated career spanning more than a quarter of a century, having amassed millions of fans around the world with his emotive and instantly recognisable voice, Bocelli has collaborated with a host of A-list stars including Luciano Pavarotti, Ariana Grande, Jennifer Lopez, Christina Aguilera, Ed Sheeran, Dua Lipa, Céline Dion, Tony Bennett and many more.

Ultimately, Bocelli understands that all music is good for the soul in a way that taps into the most subtle nuances of humanity, irrespective of individual belief: "Good music brings with it a powerful message of peace and fellowship, teaching us about beauty, and helping us to open our hearts and minds."

Diana Ross "Thank You" -- New Album Released In The Autumn...