SAN FRANCISCO, Aug. 15, 2017 /PRNewswire/ -- Blockstream, the leader in blockchain and financial cryptography, today announced the availability of Blockstream Satellite, a new service that broadcasts real-time Bitcoin blockchain data from a group of communication satellites in space to almost everyone on the planet. Blockstream Satellite enables further participation in Bitcoin, including the billions of people in the world without internet access and people in places where bandwidth prices make participating cost prohibitive. With today's announcement, Blockstream Satellite is available across two thirds of the Earth's landmass, and additional coverage areas will soon come online to reach almost every person on the planet by the end of the year. 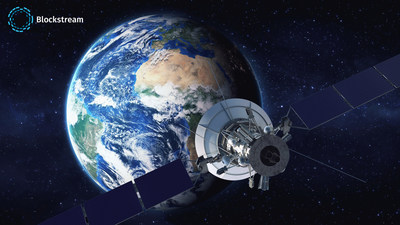 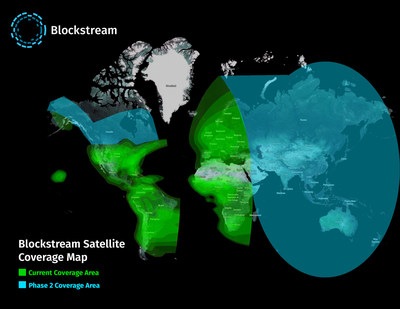 "Bitcoin is a powerful and transformative internet native digital money that has blazed a trail of disruption, with its full potential yet to unfold. Because it's permissionless, Bitcoin enables anyone to freely create new financial applications and other innovations that use the blockchain that haven't been possible before," said Dr. Adam Back, co-founder and CEO at Blockstream. "Today's launch of Blockstream Satellite gives even more people on the planet the choice to participate in Bitcoin. With more users accessing the Bitcoin blockchain with the free broadcast from Blockstream Satellite, we expect the global reach to drive more adoption and use cases for Bitcoin, while strengthening the overall robustness of the network."

The Blockstream Satellite network currently consists of three geosynchronous satellites at various positions over Earth that cover four continents -- Africa, Europe, South America, and North America. By the end of 2017, additional satellites will be added to the Blockstream Satellite network enabling worldwide coverage and reaching nearly every person on the planet. Ground stations, called teleports, uplink the public Bitcoin blockchain data to the satellites in the network, which then broadcast the data to large areas across the globe. Additional teleports are being built out in phases to enable worldwide coverage.

Blockstream Satellite will help extend Bitcoin everywhere in the world, including in countries across Asia, South America, and Africa where the number of nodes today is small. "When I first heard of Blockstream Satellite, I immediately recognized its great potential to bring Bitcoin to regions of the world where internet access is either unavailable or expensive. Not to mention its ability to provide redundancy when Internet access is temporarily unavailable," said Tim Akinbo, who runs the only bitcoin node in West Africa.

To learn more about Blockstream Satellite and get started, please visit: https://blockstream.com/satellite

To learn more about Blockstream, visit blockstream.com. Join the conversation by following @blockstream on Twitter.

Blockstream is the leader in interoperable blockchain technologies (sidechains), and applying innovative uses of cryptography for commercial privacy within blockchain infrastructures. Advancing the most mature, fully tested, and secure blockchain infrastructure in production with the most experienced teams in the industry, Blockstream partners with companies around the world that are seeking a path to production for digitized assets and new cryptographic financial systems. Learn more at https://blockstream.com/