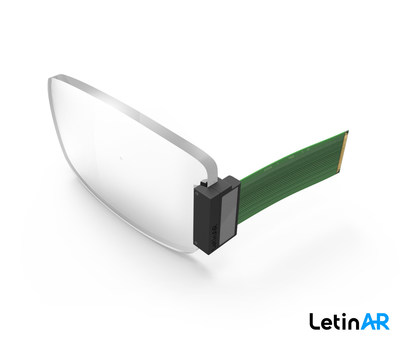 LetinAR, a member company of the K-ICT Born2Global Centre, develops an optical system for AR smart glasses, which plays the same role as smartphone displays. The optical system consists of LetinAR's self-developed "Pin Mirror ('PinMR™') lens" and a microdisplay made by external partners.

Current smart glasses manufacturers such as Google, Microsoft, and Magic Leap use traditional optical systems such as Half-mirror, Diffractive Optical Elements (DOEs), and waveguides to build the devices. Under-par performance of those optical systems has hardly satisfied users and experts. The bulky body, narrow Field of View (FOV), complicated manufacturing process, and inaccurate color expression have long been a stumbling block for successful commercialization of AR smart glasses.

LetinAR's PinMR™" lens is set to replace such displays. The company has applied the so-called "Pinhole Effect" to tiny mirrors and embedded them with eyeglass lenses. Respective PinMR™ reflects the light from a microdisplay and guides the light into human pupils. Users may view the virtual image from the microdisplay as well as the image from the real world at ease. Human eyes cannot detect the mirrors because the mirrors are smaller than human pupils. Only the virtual image formed by the light reflected by those mirrors becomes visual.

With LetinAR PinMR™ lens, smart glasses manufacturers can build smart glasses worn like a pair of conventional glasses. The simple structure of PinMR™ Lens module can facilitate mass production. PinMR™ Lens shows up to 66% wider virtual screen than the currently available optical systems while more accurately expressing colors -- an edge over diffraction-based or refraction-based systems from competitors. PinMR™ Lens can also show a clear image without inducing dizziness because it is able to extend the Depth of Field (DOF) multiple times.

LetinAR plans to supply PinMR™ Lens as a complete module, which consists of PinMR™ lens and a microdisplay from external partners.

"We have developed PinMR™ technology, a new way to overcome the technical barriers that have long existed in the AR industry. LetinAR PinMR™ optical solution boasts much more superior performance than existing counterparts," said LetinAR CEO Jaehyeok Kim. "We believe that PinMR Lens will fundamentally change the way people communicate in the near term."

LetinAR successfully demonstrated the potential of PinMR™ lens replacing existing optical systems at the Consumer Electronics Show and Mobile World Congress in 2018. In 2019, LetinAR is set to demonstrate its mechanism and showcase samples at the CES and MWC.

(Visitors may request a meeting at the upcoming events on LetinAR's homepage at https://letinar.com.)

LetinAR will begin providing PinMR™ Lens samples next year, making it possible for smart glasses manufacturers to evaluate the potential of using PinMR™ lens for their own products.

"Two biggest Korean internet companies investing a single hardware startup is very unusual. We are thrilled to help LetinAR bring their innovative product to market," said Gi-Joon Kim, partner of Kakao Ventures. "Several tech giants have tried to build AR glasses. However, due to the complicated optical system they employ, no one has succeeded in coming up with AR glasses with a look of a pair of ordinary glasses. With an outstanding team of developers, LetinAR has solved this problem and is ready to completely transform this growing industry. We will fully support LetinAR growing into an industry leader."

With smaller form factor, larger FoV (Field of View), wider DoF (Depth of Field) in addition with accurate color expression, LetinAR PinMR™ will be capable of replacing existing optical systems for AR glasses. LetinAR PinMR™ Lens can be produced with a simpler manufacturing process than traditional optical systems. LetinAR PinMR™ Module will be offered on order-basis, and samples will be available for purchase at https://letinar.com from next year.

Field of view (FoV) is an extent of the observable world that can be seen at the given moment. By extending FoV, users can see a wider area of augmented objects at the same time.

Depth of Field (DoF) refers to the distance between the nearest and the furthest objects that can be focused at the same time. Extending DoF may reduce the dizziness of AR or VR devices that originates from focus mismatch.

LetinAR is a startup that develops optical solutions for Augmented Reality (AR) Glasses. Based in Seoul, South Korea, the company was founded in October 2016. It has raised $700,000 seed money from Naver, the biggest portal site and search engine operator in South Korea. LetinAR went on to receive $3.6 million in Series A funding from another internet giant, Kakao Ventures. LetinAR aims to break down the technical barriers that have long hindered the commercialization of AR glasses, with its trademarked PinMR™.