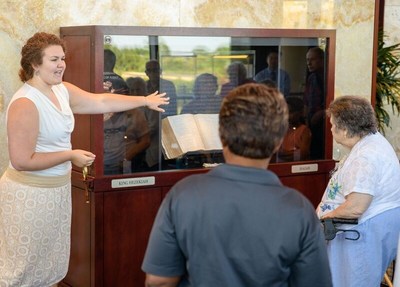 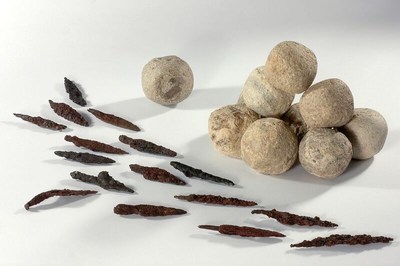 "These rare artifacts give viewers a glimpse into biblical times, and bring to life the story of the prophet Isaiah and King Hezekiah," said Brad Macdonald, curator for the exhibit. "We've had tour buses and thousands of visitors from all over the U.S. experience the interactive display at Armstrong Auditorium." According to Macdonald, over 4,000 people have visited the exhibit in just the first nine weeks, prompting the foundation to request an extension from the Israel Antiquities Authority. The IAA approved the request and the exhibit will remain open through January 27, 2019.

The exhibit includes over three dozen artifacts from Jerusalem's First Temple period, including royal Judean vessels, silver bullion and weapons used during the siege of Lachish, as well as replicas of the Assyrian wall reliefs of Lachish and the famous Annals of Sennacherib Prism (aka Taylor Prism).

"I loved the experience of walking in Hezekiah's tunnel," commented Cary Rholdon on Facebook, about the exhibit's 10-foot-long exact replica of Hezekiah's underground water tunnel in Jerusalem.

Wally Jones, who drove over three hours to view the exhibit wrote, "Fabulous exhibit! Anyone interested in Old Testament studies should put this on their must see list."

The most popular artifacts are the two clay seals that were discovered in an excavation by Dr. Eilat Mazar of Hebrew University, explained Macdonald. According to their inscriptions, the clay seals, called bullae, belonged to King Hezekiah of Judah and Isaiah, believed to be the prophet. The seals were found by Mazar in the same strata of soil just feet apart in the ruins of the royal palace in Jerusalem and scientifically dated to the 8th century B.C.

"My church group had a wonderful time at the exhibit of the seals of King Hezekiah and the Prophet Isaiah. What a gift you have given to those of us who love the integrity of the Scriptures," wrote Dr. Kathleen Wilcoxson in an e-mail. "Our guide did an excellent job in her tour of the exhibit.  She was articulate, knowledgeable, and patient with the loquacious members of our group. Thank you again for making the Bible come alive once again."

Featured in Biblical Archaeology Review magazine, the "Seals of Isaiah and King Hezekiah Discovered" exhibition is free and open to the public. The exhibit will also be on display in the lobby of Armstrong Auditorium during the first half of Armstrong's 2018-2019 performing arts season.

The Edmond-based Armstrong International Cultural Foundation is a non-profit humanitarian organization sponsored by the Philadelphia Church of God with executive offices on the campus of Herbert W. Armstrong College. The foundation's cultural activities include a series of performing arts concerts at Armstrong Auditorium and support of archaeological excavations in Israel.