MONTREAL, June 28, 2019 /PRNewswire/ -- Arup is proud to have played a key role in the building of the Samuel De Champlain Bridge, which opened today in Montreal. The bridge was built and will be operated for the next 30 years through a public-private partnership between the Government of Canada and Signature on the Saint Lawrence Group. As the owner's engineer, Arup helped the Government of Canada achieve its objective of creating a world-class icon with a useful lifespan of 125 years, which is almost double the normal standard in Canada. 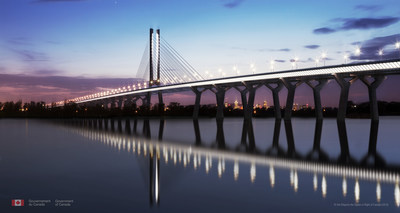 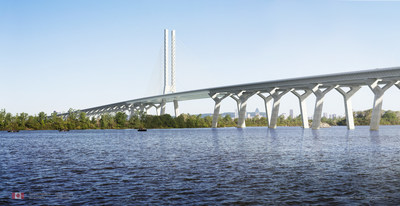 Spanning the St. Lawrence Seaway, which links marine traffic from the Great Lakes to the Atlantic Ocean and connecting to three major highways, Autoroutes 10, 15, and 20, the Samuel De Champlain Bridge is one of the busiest corridors in Canada and is vital to both the local and national economy.

Since 2012, Arup has provided comprehensive technical and procurement advice to the Government of Canada to facilitate the replacement of the aging Champlain Bridge and 8.5 kilometres of the congested Autoroutes 15 and 10 as quickly as possible. At the same time, Arup provided expert advice to ensure the architectural quality, durability and cost of the Samuel De Champlain Bridge were not compromised.

"The opening of the Samuel De Champlain Bridge is a historic and proud moment for the region of Montreal and the entire country. Throughout the project, the Government of Canada has maintained its objectives: the health and safety of workers on site, the quality of the work to be delivered to Canadians and the durability of the work for the next 125 years. I would like to congratulate the women and men who worked tirelessly and with dedication to build the Samuel De Champlain Bridge, which is sure to be a source of pride. They are the heroes of this project," said the Honourable François-Philippe Champagne, Minister of Infrastructure and Communities.

The Government of Canada and Signature on the St. Lawrence Group carried through the design vision that Arup, together with Dissing+Weitling Architecture and Provencher Roy & Associates Architects, created in 2013 in collaboration with a Visual Quality Advisory Team comprised of local design experts.

The Samuel De Champlain Bridge, highly visible along the Saint Lawrence River, transforms the Montreal skyline and serves as a global symbol for the metropolis. The bridge boasts three corridors held up by a 160-metre tall tower in a shape of a tuning fork through an elegant harp of cables.

The two outside decks will provide added capacity for motor vehicles with an additional lane in each direction and the central corridor is dedicated to public transit. The bridge also features a multi-use path for pedestrians and cyclists. A viewing platform underneath the bridge provides a distinct perspective of the sculptural piers holding up the decks.

"Sustainable development and focusing on the project outcomes are fundamental to Arup's comprehensive total quality approach. We listened to all government and community stakeholders to understand their needs and concerns," said Douglas Balmer, Samuel De Champlain Bridge project director and associate principal at Arup. "Our primary goals were to bring the bridge to life in a way that will meet the needs of the city and be embraced by its residents. We followed the Government of Canada's mandate to create a national icon that enhances a sense of place and civic pride."

"In spite of an extreme time pressure the design process was unusually smooth, so it was possible to complete the tender design in about seven months. It was a period of intense teamwork which I enjoyed very much. The design was developed in monthly weeklong workshops in Montreal and at the end of the week the progress was presented to and discussed with the client, Infrastructure Canada, and the Visual Quality Advisory Committee," said Poul Ove Jensen, architect and director of bridges at DISSING+WEITLING. "I am very happy that Canada decided to make the geometry of our design mandatory in the tender and that the bridge therefore stands exactly as intended. Now I just hope that this is the bridge the people of Montreal will call their own and be proud of."

"The opening of the Samuel De Champlain Bridge is an important event for the architectural and engineering communities, as it reflects an evolving standard of excellence in the design and construction of engineering structures in Canada. Provencher_Roy is proud to have worked closely with the project's lead designer, Poul Ove Jensen of Dissing Weitling, to create a bridge with its unique signature, emblematic of the St. Lawrence River. Our urban design team has also participated in the integration and development of the surrounding lands, responding sensitively and in an effective manner to meet  the needs of the Montreal region. It has been a privilege for Provencher_Roy to contribute to this project and to work with an exceptional design team, under the leadership of Arup. We hope today that our citizens will be delighted with this new bridge, inspired by the DNA of our metropolis," said Claude Provencher, senior partner and co-founder at Provencher_Roy.

Arup has been instrumental in delivering the project from the initial idea through procurement to the final design and construction. For the first time, a Canadian public-private partnership included a definition design for a bridge in procurement, so that the original vision could be realized in the finished product while leaving freedom for innovation to the private partner, Signature on the Saint Lawrence Group.

About ArupArup provides consulting, planning, engineering, and design services for the most prominent projects and sites in the built environment. Since its founding in 1946, the firm has consistently delivered technical excellence, innovation, and value to its clients, while maintaining its core mission of shaping a better world. The firm opened its first North American office over 30 years ago, its first Canadian office in 1999 and now employs 1,700 people in the Americas and more than 14,000 people in 88 offices across 33 countries. The firm's employee-ownership structure promotes independence, unbiased advice, and ongoing investment in joint research to yield better outcomes that benefit its clients and partners. Visit Arup's website, www.arup.com for more information.

About DISSING+WEITLING DISSING+WEITLING creates mobility projects, bridges and buildings of all scales. The company's architecture has transcended barriers for cities and environments all over the world. Several of the firm's projects such as the National Bank of Denmark, the Great Belt Link and the Bicycle Snake in Copenhagen have gained iconic status and demonstrate how the firm strives to fuse structure with aesthetics. The DNA of DISSING+WEITLING's design originates from the world famous Danish architect Arne Jacobsen whose design studio has lived on as DISSING+WEITLING since 1971.

About Provencher_RoyProvencher_Roy, a dominant player in the urban architecture in Canada, is a multidisciplinary firm offering services in architecture, urban design, urban planning and landscape architecture, interior design, industrial design and sustainability. The firm brings together nearly 350 passionate professionals working in all areas of the built environment in Canada and abroad. For over thirty-five years, the group's innovative approach has been to anticipate the impact of architectural conception and design in time and space, emphasizing the concept of openness and a holistic view of a gesture rooted in modernity, which forms an integral part of urban landscapes. Over the years, Provencher_Roy has earned more than 100 awards and distinctions recognizing the excellence of its projects.