ATLANTA, Nov. 16, 2021 /PRNewswire/ -- Resilience. In a year dominated by COVID-19, economic upheaval, price spikes and supply chain disruptions, resilience was the hallmark of the families served by Habitat for Humanity, as well as the organization's supporters, partners and staff. 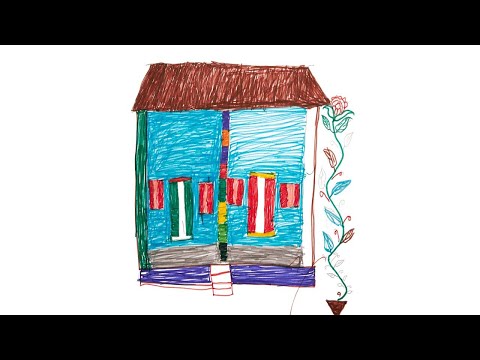 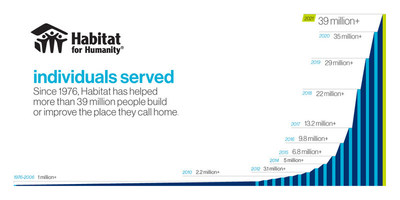 Habitat's annual report for fiscal year 2021, released today, shows how through determination and creativity, the leading global housing nonprofit organization helped more than 4.2 million people build or improve the place they call home. Buoyed by the support of more than a half million volunteers who helped build, advocate and raise awareness about the global need for shelter, families achieved new and better shelter at a time when a healthy home was the first line of defense in the pandemic.

"While the pandemic has brought so much uncertainty to so much of our lives, one thing that has not wavered is Habitat's commitment to building a stronger world through safe, decent and affordable shelter," said Jonathan T.M. Reckford, CEO of Habitat for Humanity International. "Thanks to the supporters and volunteers who put Habitat's mission into action every day, another 4.2 million people have a better, safer and healthier place to lay their heads at night."

The report covers the organization's first full fiscal year (July 1, 2020 – June 30, 2021) during the COVID-19 pandemic. While many of the organization's traditional activities were affected or curtailed by public health considerations, the network of Habitat affiliates in all 50 states in the U.S., and national programs in more than 70 countries, innovated new ways to execute the mission. For example, the report highlights how through the Terwilliger Center for Innovation in Shelter, Habitat accelerated 20 new high-impact shelter start-ups and supported more than 86,000 people through the MicroBuild Fund.

The report also demonstrates how the organization's supporters were able to continue to make impact beyond traditional building activities. More than 8.5 million people globally gained the potential to improve their housing conditions through Habitat's advocacy and training work. Throughout the pandemic, Habitat leveraged its Cost of Home advocacy campaign in the U.S. to secure Congressional support for emergency housing initiatives to aid those economically impacted by the pandemic. That advocacy helped secure $9.96 billion for a homeowner assistance fund to help families avoid foreclosure and stay in their homes.

In fiscal year 2021, Habitat for Humanity International reported US$361 million in revenue, along with an estimated US$2.3 billion in total revenue through the organization's federated network of Habitat organizations in the U.S. and around the world. The audited financial statements are published alongside the annual report at habitat.org/about/annual-reports-990s.

Driven by the vision that everyone needs a decent place to live, Habitat for Humanity found its earliest inspirations as a grassroots movement on an interracial community farm in south Georgia. Since its founding in 1976, the Christian housing organization has since grown to become a leading global nonprofit working in local communities across all 50 states in the U.S. and in more than 70 countries. Families and individuals in need of a hand up partner with Habitat for Humanity to build or improve a place they can call home. Habitat homeowners help build their own homes alongside volunteers and pay an affordable mortgage. Through financial support, volunteering or adding a voice to support affordable housing, everyone can help families achieve the strength, stability and self-reliance they need to build better lives for themselves. Through shelter, we empower. To learn more, visit habitat.org.

Drew and Jonathan Scott lead volunteers back to the Habitat for...