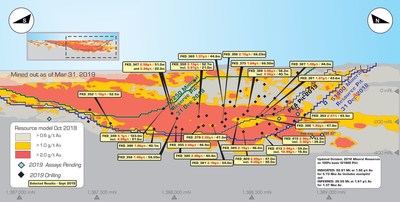 Drilling in 2019 in Mali has been focused on increasing the Anaconda area saprolite resource, testing mineralized zones beneath the shallow saprolite zones, infill drilling the Inferred portion of the Fekola Mineral Resource to Indicated status and expanding the Fekola deposit further to the north. Based on positive drill results, in July, the Company increased the 2019 exploration budget in Mali by $3 million to $20.5 million.

B2Gold has completed an 850-hole (24,863 metre) program of combined aircore, diamond and reverse circulation drilling at the Anaconda area, including on the Company's increased land position. Drilling focused mainly on the Mamba zone, located one kilometre east of the Anaconda zone, where the Company previously announced an Inferred Mineral Resource estimate of 767,000 ounces of gold at 1.1 grams per tonne ("g/t") in near-surface saprolite mineralization over 4.5 kilometres and up to 500 metres wide. The initial stage of the program has extended the strike length of known saprolite mineralized structures at Mamba by over 600 metres to over approximately one kilometre. Saprolite mineralization at the Adder zone, 1.2 kilometres to the west of the Mamba zone, remains open to the north. At Mamba, the newly discovered wide zone of sulphide mineralization is contiguous and continuous with the saprolite mineralization and remains open down plunge and to the south, indicating the potential to host Fekola-style sulphide gold deposits.

Highlights from drilling to date include:

Infill drill results to date support the results of the 2018 resource model, which had 19% Inferred Mineral Resources and 81% Indicated Mineral Resources. Furthermore, drill holes FKD_409 (4.03 g/t gold over 30.50 metres from 437.5 metres), FKD_413 (10.44 g/t gold over 19.8 metres from 495.2 metres) and FKD_415 (3.3 g/t gold over 38.2 metres from 467.5 metres)  provide added confirmation that significant intervals of high-grade gold mineralization occur beyond the limits of the 2019 Preliminary Economic Assessment ("PEA") pit shell (see news release dated May 13, 2019), within the deepest portions of the 2018 $1,400/ounce gold resource pit shell. Follow up drilling down plunge from this good grade mineralization has been completed and assays are pending from holes FKD_431 and FKD_432. Mineralization remains open to the north and down plunge. An updated resource model is scheduled for completion the fourth quarter of 2019.

Highlights from the Fekola infill program include:

Drilling is ongoing at Fekola, including a reconnaissance program on the Cardinal zone, less than one kilometre west of the Fekola Mine open pit. Drilling on the Anaconda area, to test the extension of the saprolite zones and further explore the sulphide mineralization below is scheduled to recommence in the fourth quarter of 2019. An additional 30,000 metres of drilling is planned for completion before year end and the Company expects to continue with an aggressive exploration program in 2020.

On March 26, 2019, B2Gold announced positive results from the Expansion Study PEA for the Fekola Mine. As a result, the Company is proceeding with an expansion project to increase processing throughput by 1.5 million tonnes per annum ("Mtpa") to 7.5 Mtpa from an assumed base rate of 6 Mtpa. The PEA reflected the significant increase in the Fekola Mineral Resource estimate announced on October 25, 2018. Based on the PEA, once this expansion is complete, the Fekola Mine is expected to produce more gold over a longer life, with more robust economics and higher average annual gold production, revenues and cash flows than the previous life-of-mine ("LoM").

Highlights from the PEA include: estimated optimized LoM extended into 2030, including significant estimated increases in average annual gold production to over 550,000 ounces per year during the five-year period 2020-2024 and over 400,000 ounces per year over the LoM (2019-2030), projected gold production of approximately five million ounces over the new mine life of 12 years of mining and processing (including 2019).

The processing upgrade at the Fekola Mine will focus on increased ball mill power, with upgrades to other components including a new cyclone classification system, pebble crushers and additional leach capacity to support the higher throughput and increase operability. Critical path items include ball mill motors and the lime slaker, both of which the Company expects to be commissioned in the third quarter of 2020. In parallel with the expansion, B2Gold has initiated the detailed engineering and construction for the addition of a 30-megawatt solar power plant, which the Company expects will result in reduced operating costs and greenhouse gas emissions. Completion of the solar plant is scheduled for the third quarter of 2020. The current on-site power plant has sufficient capacity to support the expanded processing throughput, with or without the solar plant.

Based on B2Gold's current projections, gold production at the Fekola Mine in 2020 is projected to be approximately 600,000 ounces of gold, primarily due to the addition of a larger mining fleet at Fekola and the optimization of the mining sequence early in 2020, prior to completion of the mill expansion by September 2019, providing access to higher grade portions of the deposit earlier on in the sequence.

QA/QC on Sample Collection and Assaying

The primary laboratories for Fekola are SGS Laboratories in Bamako, Mali, and Bureau Veritas Laboratories in Abidjan, Cote d'Ivoire. Periodically, exploration samples will be analyzed at the Fekola Mine Lab.  At each lab, samples are prepared and analyzed using 50-gram fire assay with atomic absorption finish and/or gravimetric finish. Umpire assays are used to monitor lab performance monthly.

Quality assurance and quality control ("QA/QC") procedures include the systematic insertion of blanks, standards and duplicates into the core, reverse circulation and aircore drilling sample strings. The results of the control samples are evaluated on a regular basis with batches re-analyzed and/or resubmitted as needed. All results stated in this announcement have passed B2Gold's quality assurance and quality control protocols.

Tom Garagan, Senior Vice President of Exploration at B2Gold, a qualified person under NI 43-101, has approved the information contained in this news release.

On Behalf of B2GOLD CORP.

The Toronto Stock Exchange and the NYSE American LLC neither approve nor disapprove the information contained in this news release.

This news release includes certain terms or performance measures commonly used in the mining industry that are not defined under International Financial Reporting Standards ("IFRS"), including "cash operating costs" and "all-in sustaining costs" (or "AISC"). Non-IFRS measures do not have any standardized meaning prescribed under IFRS, and therefore they may not be comparable to similar measures employed by other companies. The data presented is intended to provide additional information and should not be considered in isolation or as a substitute for measures of performance prepared in accordance with IFRS and should be read in conjunction with B2Gold's consolidated financial statements. Readers should refer to B2Gold's management discussion and analysis, available on the Websites, under the heading "Non-IFRS Measures" for a more detailed discussion of how B2Gold calculates such measures and reconciliation of certain measures to IFRS terms.