NEW YORK, Oct. 19, 2020 /PRNewswire/ -- Banza, the company that has elevated the pasta, rice, and mac & cheese categories with its chickpea-based options, today announced its largest category expansion to date with the introduction of the first-ever frozen pizza made with a chickpea crust. The new product reinforces Banza's commitment to making nutritious foods more accessible by upgrading America's favorite foods traditionally made with wheat, corn, or rice, by using chickpeas. 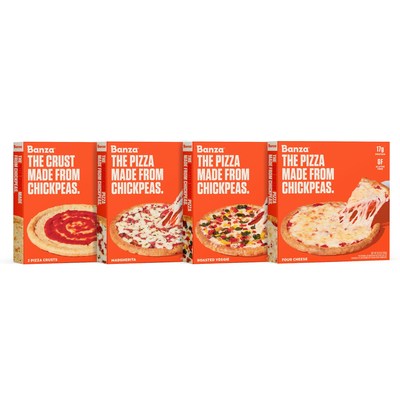 Banza's new pizzas have more protein and fiber, and fewer net carbs and sodium, than the leading traditional (wheat-based) and better-for-you (cauliflower-based) frozen pizzas currently sold in the market. With a high-quality and minimal ingredient list, Banza relies on whole ingredients like chickpeas, olive oil, yeast, and oregano to deliver on the taste and texture consumers crave when eating pizza - a crispy crust with a doughy center that doesn't flop over when you pick up a slice.

"Chickpeas are one of the most nutrient-dense and environmentally-friendly foods available, yet we consume far less of them than we should," says Brian Rudolph, CEO & Co-Founder of Banza. "At Banza, we're demonstrating the versatility of the ingredient and increasing consumption by using them to upgrade some of America's favorite foods - pasta, rice and now, pizza."

The new line is available in three ready-to-eat varieties including Four Cheese, Roasted Veggie and Margherita, and a two-pack, build-your-own Plain crust option. Each pie cooks in the oven for less than 15 minutes and provides either eight servings (for Plain Crust, which comes with two crusts per package) or two servings (for others).

"My family and I have been having so much fun with Banza's new chickpea-based pizzas - they're delicious and strike the right balance of chewy and crispy. The plain crust pizzas provide a delicious blank slate to build our own pies, and it's clear the product will find a home in freezers nationwide," says Danny Meyer, CEO, Union Square Hospitality Group.

Since launching five years ago, Banza has become the fastest-growing pasta brand in the U.S. and is currently sold in more than 13,500 stores. The company now offers 16 different pasta shapes, four varieties of chickpea rice, and six varieties of mac & cheese.

Banza Pizza is now available nationwide at Target, Whole Foods Market, Wegmans, and Heinen's, as well as online at Amazon and EatBanza.com, with an MSRP of $8.99.

Banza, founded by brothers Brian and Scott Rudolph, is on a mission to increase the consumption of legumes. Legumes, like chickpeas, are one of the healthiest foods for both people and the planet, yet we don't eat enough of them. Banza does this by transforming legumes into the foods we know and love, like pasta, mac and cheese, rice, and now pizza.

Banza's chickpea pasta has nearly double the protein, three times the fiber, and one-third fewer net carbs than traditional pasta. Since launching in retail in 2014, Banza pasta has expanded to over 13,500 stores nationwide and is the fastest-growing pasta brand in the country. For more information about Banza, please visit www.eatbanza.com.

Banza and The Sporkful's Dan Pashman Team Up to Launch Cascatelli ...