NEW YORK, Nov. 16, 2017 /PRNewswire/ -- Barneys New York, the luxury specialty retailer, today announced the launch of its renowned 2017 holiday collaboration, Haas for the Holidays. The campaign, which celebrates an uplifting message of diversity and inclusion, is a collaboration with artists Simon and Nikolai Haas of The Haas Brothers, represented by R & Company. Haas for the Holidays includes Barneys New York's famed window displays, interactive in-store experiences, 40+ pieces of limited edition exclusive merchandise, and a social giving campaign. For the first time, Barneys New York will extend the holiday collaboration nationally with varying window displays, as well as immersive in-store experiences. 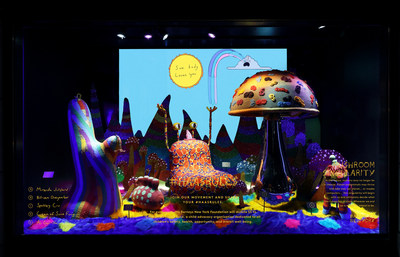 "The holiday season is always a special time for us at Barneys New York," said Daniella Vitale, CEO and President, Barneys New York. "This year especially, we can't wait for customers to take part in the engaging one-of-a-kind experiences we're delivering with Haas for the Holidays, both within our stores and in our windows."

Infusing the artists' signature playful creativity, Haas for the Holidays creates an imaginative universe for Barneys New York visitors from around the world. Opening on November 16, Barneys New York's Madison Avenue window displays will entertain viewers with the positive message of Haas for the Holidays' interpretation of the Earth through the ages, with Haas animations and characters coexisting through eras from the beginning of the earth to the distant future.

Embodying the theme "The Future is Your Present," the windows illustrate four phases from left to right: Primordial, Utopia, Millennium, and Mushroom Singularity.  Each features Haas characters like Rainbow Baggins the rainbow zebra, Rhinona Wyder the rhino, and more. The windows are brought to life by advanced LED displays created by Christie®, which create a living background, with characters and day to night animation across all four windows. Additionally, Barneys New York stores across the country will have their own themes based on Haas designs, which will be incorporated into window displays and interior experiences.

"Holiday windows have always provided an escape from the everyday," said Matthew Mazzucca, Creative Director, Barneys New York. "We were thrilled to collaborate with the Haas Brothers to tackle complicated themes through a unique lens of playful environments and characters. The result is a fun and engaging concept that celebrates individuality, inclusiveness and love."

"Working with Barneys New York to create Haas for the Holidays has been a one-of-a-kind experience," said Simon and Nikolai Haas, Artists, The Haas Brothers. "We are excited to translate our artistic vision into experiences that will entertain and engage a whole new audience, and also shine a positive light on inclusiveness during these divisive times."

To spread the positive spirit both in its stores and on social media, Barneys New York will be debuting #HaasRules, a social media-driven campaign featuring positive and inspirational sentiments, which will be incorporated throughout Barneys New York locations and Barneys.com. #HaasRules include "The Future is Your Present," "Snake Love, Not War," "Can't Stop the Waves, Just Wave Back," and more.

#HaasRules will be incorporated into immersive environments inside Barneys New York stores. In Barneys New York's Madison Avenue flagship, each floor will feature environments that embody different #HaasRules. The fourth floor's "Boulder and Wiser" theme will feature a colorful rock garden lounge for customers to interact with, with a selfie system to take photos in the immersive space. Its Downtown store will take on the "Snake Love, Not War" theme, featuring jungle themes and a snake graphic wrapping around the iconic spiral staircase. And, the Beverly Hills location will incorporate a variety of wave motifs to represent "Can't Stop the Waves, Just Wave Back."

Through the Barneys New York Foundation, Haas for the Holidays and #HaasRules will benefit the Children's Defense Fund (CDF) with proceeds from an exclusive coloring book, a social giving campaign, and an overall charitable contribution. The CDF is dedicated to providing a strong, effective and independent voice for children, particularly focusing on needs related to diversity, poverty and disabilities.

To download images of Barneys New York's Haas for the Holidays windows and interiors, visit here.

For information and updates on Haas for the Holidays throughout the season, visit Barneys New York's editorial site, The Window: http://thewindow.barneys.com/

ABOUT BARNEYS NEW YORK BARNEYS NEW YORK (Barneys) is a luxury specialty retailer renowned for having the most discerning edit from the world's top designers, including women's and men's ready-to-wear, accessories, shoes, jewelry, cosmetics, fragrances, and gifts for the home. Barneys' signature sense of wit and style is manifested in its creative advertising campaigns, original holiday themes, and celebrated window displays. Founded as a men's retailer in 1923 in downtown Manhattan, it became an international arbiter of high style for both women and men in the 1970s, renowned for discovering and developing new and innovative design talent. Today, Barneys New York operates flagship stores uptown on Madison Avenue and downtown in Chelsea in New York City, as well as additional flagships in Beverly Hills, Chicago, Seattle, Boston, San Francisco, and Las Vegas, along with a preeminent luxury online store, Barneys.com, as well as 16 other stores and outlets across the United States. For more information about Barneys New York, please visit www.Barneys.com and explore its luxury content site, The Window, for an insider's look into the Barneys world: a behind-the-scenes visit with exciting designers, fashion, events, and the Barneys team.

ABOUT THE HAAS BROTHERSThe Haas Brothers, twins Nikolai and Simon (b. 1984), had a creative upbringing in Austin, Texas where their opera singer mother, actor brother and sculptor father taught them to play music, write, sing and paint. Starting in their early teens, they studied stone carving under their father, mastering the craft before leaving home. The twins parted ways in 2003 to pursue their artistic goals individually. Simon studied painting at RISD while Nikolai toured as a musician. In 2007, the two reconvened in Los Angeles to tour with the band RRIICCEE, then founded The Haas Brothers there in 2010 when L.A. architects Johnston Marklee offered a chance to collaborate on a friend's project. Early on, the brothers received accolades for their exceptional craftsmanship and expansive studio practice. The years since have seen them evolve from fabricators and collaborators to nimble cross-pollinators in creative disciplines including fashion, film, music, art and design.

In their current works, The Haas Brothers explore aesthetic and formal themes related to nature, science fiction, sexuality, psychedelia and color theory in prolific materials. Their mastery and uniquely clever use of materials ranging from brass, bronze, porcelain and fur to highly technical resins and polyurethane, matched with their insatiable curiosity and remarkable visual intelligence, sets them apart as designers.

In 2015, The Haas Brothers embarked on an extraordinary collaboration with women artisans in Cape Town, South Africa. The resulting series of intricately beaded functional and sculptural objects, Afreaks, was included in Beauty--Cooper Hewitt Design Triennial at the Cooper Hewitt, Smithsonian Design Museum in New York, NY and at the San Jose Museum of Art in San Jose, CA.

In 2017, The Haas Brothers created, Gorillas in the Mist, a large public work in the piazza of the Aventura Mall in Miami. Their work is in the permanent collections of the RISD Museum in Providence, RI, the Cooper Hewitt, Smithsonian Design Museum in New York, NY, and the Metropolitan Museum of Art in New York, NY.

The Haas Brothers currently live and work in Los Angeles, California and all of their works are available through R & Company.

ABOUT R & COMPANY R & Company represents a distinguished group of historical and contemporary designers whose work is among the most innovative and finely crafted of their time.

Gallery principals Zesty Meyers and Evan Snyderman have garnered international acclaim for their groundbreaking exhibitions and publications and for their commitment to preserving history through their extensive archives, library and private collection. Consistently, Meyers and Snyderman exhibit an extraordinary acumen for discovering and bringing designers to the forefront of the rapidly escalating design market.

R & Company is currently developing exhibitions and publications on the designers it represents -- a diverse program that includes work from North America, South America, Europe and Asia produced between 1945 and today. In addition to the exhibition program and showroom in New York, Meyers and Snyderman offer the work of R & Company designers internationally, contribute widely to publications, and lecture frequently about design.