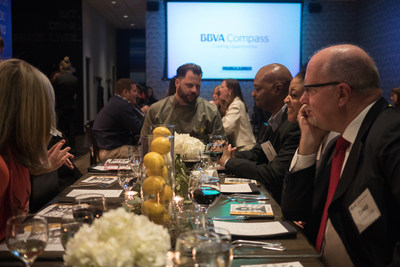 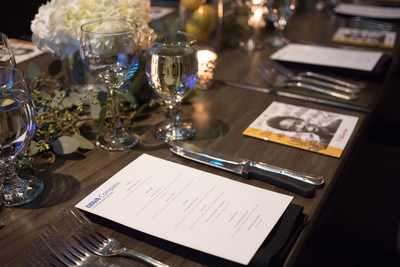 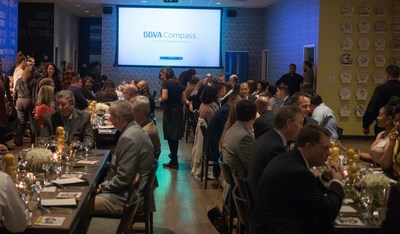 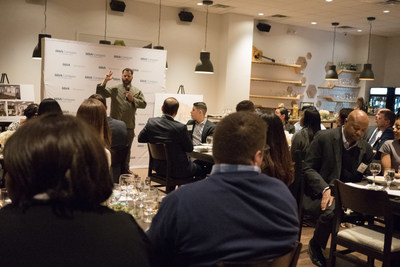 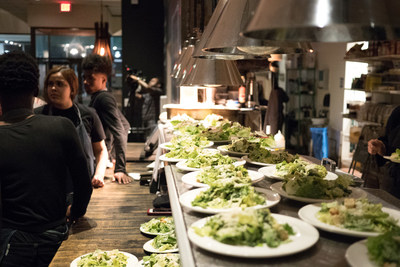 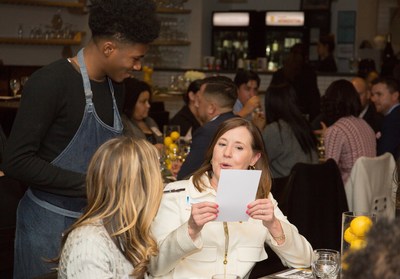 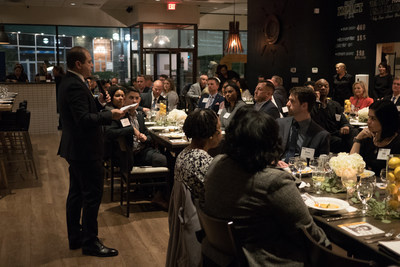 The evening had multiple purposes — to come together and celebrate Houser's first-place prize of $50,000 in the bank's BBVA Momentum accelerator program for social entrepreneurs, and to kick off Café Momentum's fundraising effort for the planned 4,500-square-foot Café Momentum Community Services Center in the tunnel space beneath Thanks-Giving Square, which is adjacent to the restaurant.

"To read about Café Momentum is moving in and of itself, but to be here and experience it reaches into your heart in a more profound way," said BBVA Compass Dallas CEO Key Coker, who welcomed the guests Thursday night. "We knew when we launched BBVA Momentum that we were going to meet amazing people who'd dedicated their lives to creating opportunities. That's Chad, and we're so proud of him. What we didn't anticipate was meeting these young people who are teaching us so much about the power of hope and pure determination."

Café Momentum provides paid internships to former juvenile offenders. They receive intensive culinary, job and life-skills training as well as continued mentoring and support, all of which is designed to foster their successful reentry into the community.

"I want every one of these young people to be able walk out of these doors and be able to say, 'I believe in me. I can do this,'" said Chad Houser, Café Momentum's founder, CEO and executive chef. "They show up every day, amidst all of the odds that are stacked against them, and they commit. And the commitment that they're making is to themselves. It's not to me, it's not to the restaurant, it's not to the guests. It's to themselves."

To further the bank's commitment to the restaurant, BBVA Compass Director of Corporate Responsibility & Reputation Reymundo Ocañas announced at the event that the BBVA Compass Foundation would be giving an additional $4,000 to sponsor a table and chairs at Café Momentum.

Café Momentum's first brick-and-mortar restaurant and classroom space opened in January 2015 in downtown Dallas, and it was promptly named Eater Dallas' 2015 "Restaurant of the Year." It serves dinner Thursday through Saturday beginning at 5:30 p.m.

In Texas, Houser said, 48.3 percent of youths who have committed a crime will re-offend within 12 months. At Café Momentum, that rate is 15.2 percent.

"There's a taxpayer savings to that," he said. "In Texas, we pay $127,000 to incarcerate a child. So just looking at the reduction of recidivism from 48.3 percent to 15.2 percent, we've already saved taxpayers over $19.8 million since we started."

Before starting Café Momentum, Houser had been a chef for nearly 20 years — he received multiple nominations from D Magazine for Best Up-And-Coming Chef and Best Chef, and received the Edible Dallas/Fort Worth Local Hero-Chef award.

Houser won the top prize of $50,000 in December at BBVA Momentum. The BBVA Momentum program has been operating since 2011 in other countries throughout the global footprint of BBVA, the Madrid-based bank, but 2017 marked its first foray into the U.S.

"The monies and support from BBVA Momentum mean so much to our day-to-day efforts and beyond," Houser said. "Vital funding such as this ensures our entire team is able to not only maximize our ecosystem of support to help all of our interns but it also allows us to expand our efforts with new innovations such as the Café Momentum Community Services Center."

BBVA Momentum's goal is to help social entrepreneurs — those who are hoping to change the world through their work — scale up and make a positive impact on the lives of more people. Over several months, participants were given access to online and in-person training, strategic support, networking opportunities and visibility.

Educators at the University of Texas at Austin's McCombs School of Business, one of the nation's most prestigious, led the in-person training at the AT&T Executive Education & Conference Center in Austin. They gave the social entrepreneurs their undivided attention over three separate multi-day training sessions, covering down-in-the-trenches topics on financial planning, marketing, and how to pitch investors, among other things.

In December, the participants brought all of their learning to bear and pitched their businesses to a panel of judges — entrepreneurs, UT-Austin McCombs School of Business educators and BBVA Compass executives — and those considered the most sustainable and with the highest social impact received cash awards. In addition to Houser's $50,000 prize, Margo Baines of Houston-based Chicks With Class was awarded $25,000 for second place, while Andy Lovley of Dallas-based Education Opens Doors received $5,000 for third.

Thursday's event also served as the formal announcement of Café Momentum's fundraising effort for its planned community center. Margaret Reid Windham, Café Momentum's Chief Development Officer, said they need to raise $435,000 to build out the tunnel space beneath Thanks-Giving Square. Plans for the community services center include classroom space, therapy space, a wellness room and access to healthcare, to name a few.

"Our hope is that opening a nearby community services center will offer an alternative to the negative pressures from the neighborhoods which led Interns into the juvenile system," Houser said. "The center will provide space for us to leverage growth while also dramatically increasing our program offerings, partnerships, and hours of impact and influence with our Interns."

BBVA (NYSE: BBVA) is a customer-centric global financial services group founded in 1857. The Group has a strong leadership position in the Spanish market, is the largest financial institution in Mexico, it has leading franchises in South America and the Sunbelt Region of the United States; and it is also the leading shareholder in Garanti, Turkey's biggest bank for market capitalization. Its diversified business is focused on high-growth markets and it relies on technology as a key sustainable competitive advantage. Corporate responsibility is at the core of its business model. BBVA fosters financial education and inclusion, and supports scientific research and culture. It operates with the highest integrity, a long-term vision and applies the best practices. More information about BBVA Group can be found at bbva.com.

BBVA Compass is a Sunbelt-based financial institution that operates 649 branches, including 336 in Texas, 89 in Alabama, 63 in Arizona, 61 in California, 45 in Florida, 37 in Colorado and 18 in New Mexico. BBVA Compass ranks among the top 25 largest U.S. commercial banks based on deposit market share and ranks among the largest banks in Alabama (2nd), Texas (4th) and Arizona (6th). BBVA Compass has been recognized as one of the leading small business lenders by the Small Business Administration (SBA) and ranked 6th nationally in the total number of SBA loans originated in fiscal year 2017. Additional information about BBVA Compass can be at www.bbvacompass.com. For more BBVA Compass news, follow @BBVACompassNews on Twitter or visit newsroom.bbvacompass.com.