HOUSTON, June 13, 2019 /PRNewswire/ -- BBVA, the Houston Dynamo and Dash, and key city leaders gathered at the newly-renamed BBVA Stadium on Thursday to unveil the iconic venue's new signage in a ceremonial press conference, marking a new beginning for an East End neighborhood staple.

The new stadium name and corresponding signage change is part of BBVA's ongoing brand unification happening across the globe. BBVA Group's new logo and unified brand signals an advancement in the financial institution's efforts to become a single, global digital entity in all areas where it operates. 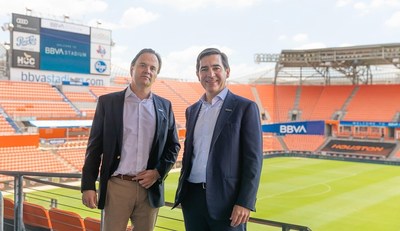 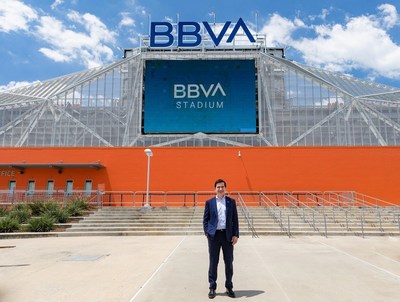 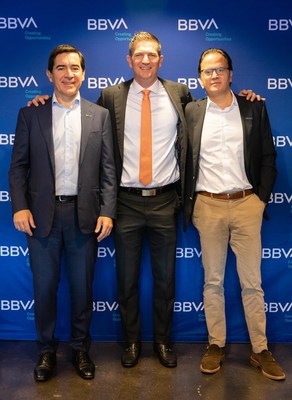 "BBVA Stadium has been a key venue for the bank for multiple reasons," said BBVA USA President and CEO Javier Rodriguez Soler. "It has hosted various sports, entertainment and charity events, cultivated a solid partnership between the bank and the Houston Dynamo and Dash, and over the past seven years, has provided an economic boost to the East End neighborhood. By updating the stadium's name, we are re-establishing our commitment to creating even more opportunities to an up-and-coming area and its residents."

More than 75 attendees were on-hand to witness the stadium's name unveiling, which Rodriguez Soler led with a countdown from a press conference podium in the stadium's Audi Sport Club.

In addition to the unveiling, Rodriguez Soler also announced the First Annual BBVA Classic, which will feature the Dynamo and Mexican powerhouse Club América from Liga BBVA. Previously known as the BBVA Compass Dynamo Charities Cup, the match will be held on Wednesday, July 24 at 7:30 p.m. CDT as part of the new Leagues Cup tournament between Major League Soccer and Liga BBVA.

A portion of the proceeds from the game will benefit the Tejano Center for Community Concerns, a neighborhood resource center for families across Houston. The center, originally founded in East End in 1992, strives to develop education, social, health and community institutions that empower families to transform their lives.

A dozen students from the Raul Yzaguirre Schools for Success Elite STEM Primary Academy's girls and boys soccer teams attended the ceremony and were recognized during the press conference. The academy is one of the various programs the center offers to fulfill its mission.

Carlos Torres Vila, BBVA Group Executive Chairman, also made the trip from Madrid, Spain to attend the press conference and took a moment to address the people in attendance on behalf of the bank's global operations.

"BBVA's brand name unification and logo change are part of our purpose, to bring the age of opportunity to everyone. This new identity underscores BBVA's commitment to provide its customers global products and services and the best user experience, developing solutions that help our customers make the best decisions in their lives and their businesses," said Torres Vila. "I'm honored to have been in Houston to demonstrate our commitment to the city by unveiling our unified brand name and new logo on one of Houston's own landmarks, the BBVA Stadium."

"BBVA Stadium has quickly established itself as a premier sports and entertainment venue not only in Houston, but in America," Walker said. "Along with our partners at BBVA, we look forward to continuing to deliver championship-level experiences to fans from around the world and showcasing the BBVA brand on a global scale for years to come."

Since the stadium opened its doors, the bank's commitment to the East End has helped strengthen the area's economy on multiple fronts. More recently, the BBVA Foundation awarded more than $130,000 to non-profits serving East End neighborhoods in 2018.

BBVA also provided a combined $29.5 million in construction financing and equity investment in the amount of $20.5 million on two multi-family housing developments in East End neighborhoods during 2018. Those affordable housing projects include Campanile on Commerce and New Hope Housing Harrisburg.

Further to BBVA's commitment to the East End, since 2016, the bank has invested $3.25 million to LISC Greater Houston that resulted in the creation of affordable housing in East End neighborhoods.

For more information on the BBVA brand unification, click here.

For more BBVA news visit, www.bbva.com and the U.S. Newsroom.

BBVA Group BBVA (NYSE: BBVA) is a customer-centric global financial services group founded in 1857. The Group has a strong leadership position in the Spanish market and is the largest financial institution in Mexico. It has leading franchises in South America and the Sunbelt Region of the United States. It is also the leading shareholder in Turkey's BBVA Garanti. BBVA's purpose is to bring the age of opportunities to everyone, based on our customers' real needs: provide the best solutions, helping them make the best financial decisions, through an easy and convenient experience. The institution rests in solid values: Customer comes first, we think big and we are one team. BBVA's responsible banking model aspires to achieve a more inclusive and sustainable society.

BBVA in the USA In the U.S., BBVA is a Sunbelt-based financial institution that operates 641 branches, including 329 in Texas, 89 in Alabama, 63 in Arizona, 61 in California, 45 in Florida, 37 in Colorado and 17 in New Mexico. The bank ranks among the top 25 largest U.S. commercial banks based on deposit market share and ranks among the largest banks in Alabama (2nd), Texas (4th) and Arizona (6th). In the U.S., BBVA has been recognized as one of the leading small business lenders by the Small Business Administration (SBA) and ranked 8th nationally in terms of dollar volume of SBA loans originated in fiscal year 2018.