NEW YORK, March 4, 2020 /PRNewswire/ -- After declaring Beauty is #NOCOMPETITION, global prestige skincare brand SK-II is continuing the conversation by joining forces with Olympic gymnast Simone Biles to defeat the world's biggest beauty troll in an epic Times Square Takeover. The stunt announces the upcoming release of "VS"—an SK-II STUDIO Animated Series that brings to life the stories of top Olympic athletes in a six-part series, celebrating the fight to shatter competition in the one place it is toxic—beauty. 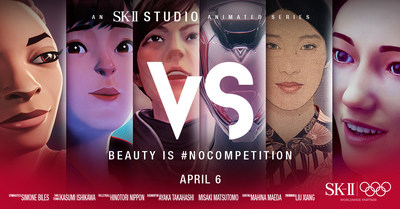 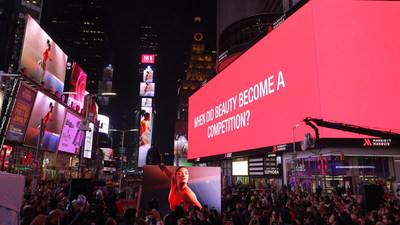 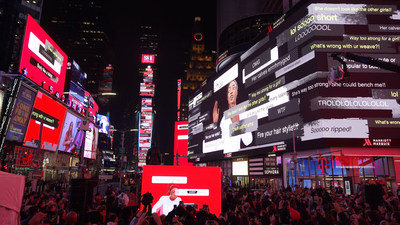 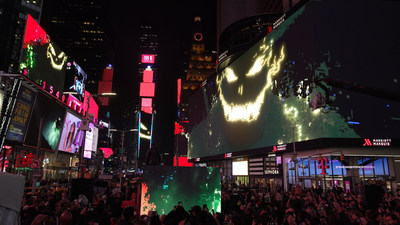 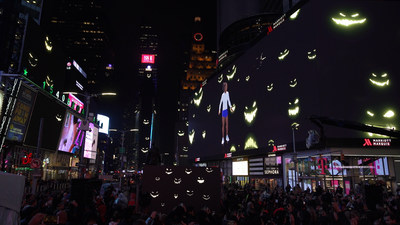 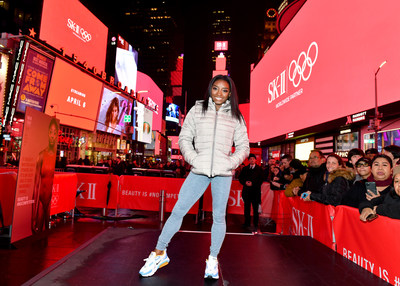 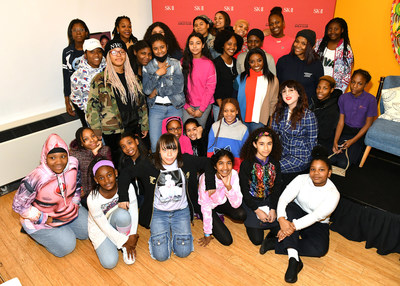 As the world witnesses the beauty of competition at the Olympic Games Tokyo 2020, SK-II has teamed up with top Olympic athletes to declare #NOCOMPETITION, in a stand to take the competition out of beauty. Since its launch at The 2020 MAKERS Conference, Beauty is #NOCOMPETITION has sparked a global conversation about toxic competitions in beauty, becoming a rallying cry for women to call out these toxic competitions and define what beauty means to them. Because pressure should never dictate our choices and how we look, act and feel.

Watch the "VS" Series by SK-II STUDIO Teaser https://www.youtube.com/watch?v=wpuQS1mEnnU

Each film within the "VS" Series by SK-II STUDIO explores a different facet of toxic competition in beauty in society today that dictate how beauty should look, act and feel: Trolls. Pressure. Image Obsession. Rules. Limitations. Machine-Like Mindsets. Brought to life in the form of a "strange beast" or "kaiju" in Japanese, each "kaiju" sheds light on the inner demon each athlete must defeat to define what beauty means to them.

Teasing the launch of the "VS" Series in Times Square, Olympic gymnast Simone Biles transforms into a larger than life digital avatar from her film and takes down her "kaiju" – a two hundred foot tall "Beauty Troll King" made up of actual comments and tweets from beauty trolls about how she looked or behaved in the course of her gymnastics career. The epic battle, symbolizing Biles' fight against competing beauty standards and beauty trolls, spanned across forty-one digital billboards in Times Square and teased scenes from Biles' film within the series. It also featured the film's theme song "Take A Look" from singer songwriter John Legend.

"I am sharing my story so that young women and girls who have experienced beauty trolling know that they are not alone in their fight against the trolls and toxic beauty standards," shared Simone Biles, Olympic Gymnast. "It really means a lot to me to share the important message that we define what beauty means to us. No one should tell us what beauty should or should not look, act or feel like."

Biles also joined SK-II in visiting the Lower Eastside Girls Club to share her perspective on beauty standards with the young women. The conversations shed light on the toxic culture of beauty shaming and how the issue of beauty trolling starts as early as high school.

"Beauty can be many things. But one thing it should never be, is a competition. As a beauty brand, our role is to build confidence and spread positivity, and not create pressure and toxicity," added Sandeep Seth, Chief Executive Officer, Global SK-II.  "We were deeply inspired by the stories of our athletes and wanted to recognize how they have conquered toxic competition in beauty in way that's never been done before, bringing together elements from Japanese culture like manga, together with animation, live action and different film genres. We look forward to sharing the "VS" Series, our first animated series with the world. Stay tuned."

The global release for "VS" Series by SK-II STUDIO for Beauty is #NOCOMPETITION will be announced at a later date.

"VS"—an SK-II STUDIO Animated series was created through a unique collaboration between SK-II and WPP Black Ops, a newly formed, hyper-accelerated creative unit, which brought together worldwide talent to creatively push the boundaries of our preconceptions of beauty.

To find out more about the "VS" Series and learn about Beauty is #NOCOMPETITION, please visit nocompetition.sk-ii.com.

About SK-IIFor more than 38 years, SK-II has touched the lives of millions of women around the world through skin and life transformation. The fascinating story behind SK-II began with a quest to understand why elderly sake brewers had wrinkled faces, but extraordinarily soft and youthful-looking hands. These hands were in constant contact with the sake fermentation process. It took years of research for scientists to isolate the miracle ingredient Pitera™, a naturally-derived liquid from the yeast fermentation process. Since then, SK-II with Pitera™ has become a special secret shared by celebrities all over the world such as Chloe Grace Moretz, Behati Prinsloo Levine, Tangwei, Ni Ni, Chun Xia, Haruka Ayase and Kasumi Arimura. For the latest news and in-depth information, please visit http://www.sk-ii.com .

About #CHANGEDESTINY #CHANGEDESTINY is at the heart of the SK-II brand philosophy that celebrates how destiny is not a matter of chance, but a matter of choice. Inspired by the stories of women from around the world, #CHANGEDESTINY sheds light on the pressures they face and the universal 'box' they are put in to be perfect in society's eyes. Award-winning #CHANGEDESTINY campaigns include 2016's "Marriage Market Takeover" that put a spotlight on the labels of "Sheng Nu" or "Leftover Women" in China, 2017's "The Expiry Date", 2018's "Meet Me Halfway" and 2019's "Timelines" a docu-series in partnership with Katie Couric about the evolving and controversial topic of marriage pressure and societal expectations women face globally.