ORLANDO, Fla., Dec. 11, 2019 /PRNewswire/ -- On December 5, 2019 (local time), the USTOA Annual Conference took place in Orlando, Florida. Beijing Municipal Bureau of Culture and Tourism made its debut at the annual conference to promote Beijing and its cultural and tourism resources in diverse and vivid forms, making "Charming Beijing" one of the buzzwords at the conference. 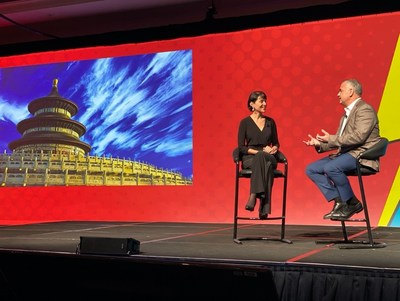 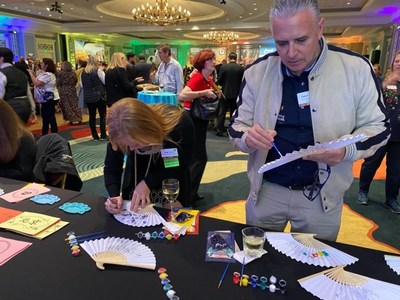 During the conference, the delegation of Beijing Municipal Bureau of Culture and Tourism took part in the most attractive "Presidents' Dialogue", and appointed Paul Cohen, President of IE Limited, which is a "Global Strategic Partner for Inbound Tourism in Beijing", made a dialogue with Anita Mendiratta, a famous British presenter, on behalf of Beijing Municipal Bureau of Culture and Tourism, giving an in-depth interpretation of the ancient and modern cultural and tourism resources in Beijing as well as the policies on inbound tourism of the city. The fabulous photos of Beijing and the humorous and witty dialogues between Paul Cohen and Anita Mendiratta received hearty laughter and warm applause from over 1,000 participants at the venue.

The "Charming Beijing" program has rich contents, involving world heritage sites such as the Palace Museum, the Great Wall, the Temple of Heaven, and the Summer Palace, etc., and modern urban landmarks such as the Bird's Nest, the Water Cube, and Sanlitun, etc., which attract lots of visitors. What do foreign visitors like when they travel in Beijing? USTOA Chairman Terry Dale said that American tourists like local experience in Beijing better and hope to go to communities to learn about the music, food and arts that locals like. Australian Igonai Travel Agency Founder and Executive Director Rand Deal said, "more and more tourists like to visit special-interest cultural and scenic spots, for example, climb the Great Wall in the evening, or learn how to make dumplings." Indeed, those foreign visitors who hope to deeply experience Beijing have more options, they can not only visit world heritage sites with unique oriental charm, but also have the opportunities for visiting Hutong, living in traditional quadrangle courtyard, observing the making of cloisonne, experiencing the unique traditional Chinese medicine, and going skiing. Beijing is becoming a popular winter sports city as it steadily advances the preparations for the 2022 Olympic Winter Games, and more and more foreign visitors decide to spend their Christmas in Beijing as they can enjoy the rich, diverse and impressive travel experience there.

China Tourism Group displayed a number of travel products for experiencing Beijing at the USTOA annual conference, attracting attention from and signing MoUs for cooperation with lots of foreign tour operators. In addition, China's Hainan Airlines organized a lucky-draw activity for winning a round-trip air ticket between Beijing and the United States. The prizewinning representative of a tour operator said that he/she yearns for once again experiencing Beijing so as to draw new inspirations from the city and design better travel products for customers.