BEIJING, Jan. 18, 2020 /PRNewswire/ -- On January 16, The "Great Sharing, New Economy—Beijing Summit of the Global Sharing Economy Forum" was held at the China National Convention Center. It was sponsored by China General Chamber of Commerce and China Association for the Promotion of Industrial Development, organized by ToJoy, and received strategic cooperation and support from the Global Alliance of Sharing Economy (GLASE) and the Institute of Industrial Economics, Chinese Academy of Social Sciences, the School of Humanities and the School of Social Sciences of Tsinghua University, Renmin Business School, and the School of Management at Xi'an Jiaotong University, among others. 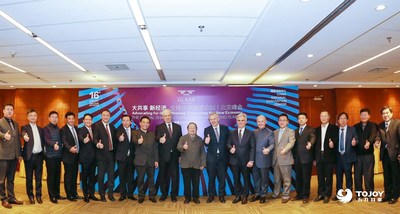 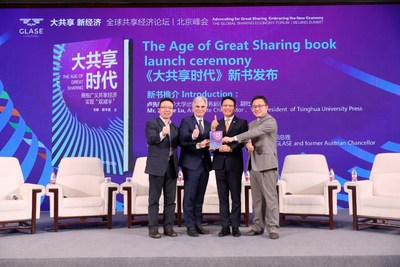 The Summit not only received support from attendees including Zhenghua Jiang, Vice Chairman of the 10th NPC Standing Committee; Hengshan Fan, former Secretary General of the National Development and Reform Commission; Xinhong Zhang, Chief Information Officer of the National Information Center and Director of Sharing Economy Research Institute; Min Wang, Executive Vice Chair of the China General Chamber of Commerce; and Xiaojun Li, Vice President of China the Association for the Promotion of Industrial Development.

At the same time, experts and scholars including Zhanbin Zhang, head professor of the Marxist School of the Party School of the Central Committee of C.P.C. (National Academy of Governance); Xiaoqiu Wu, Vice President of Renmin University of China; Dezhi Lu, Chief of the Huamin Foundation; and Yuming Zhang, a professor of the School of Management, Shandong University; as well as guests from all circles, including foreign and domestic enterprise elites and media reporters were also invited to the Summit. The guests conducted discussions around two topics:  "The Great Sharing Economy and the Development of Unicorn Enterprises" and "The Great Sharing Era and the Advanced Topics on Sharing Economy Theory".

A Strategic Departure for 2030

According to numerous opinion polls in recent years, China is expected to go beyond the US in terms of GDP around 2030, becoming the world's largest economy. Meanwhile, China's response to the UN 2030 Agenda for Sustainable Development, is that the "principle of wide consultation, joint contribution and shared benefits" advocated in the Belt and Road Initiative would be an effective tool that advances this UN Agenda.

Today, at the start of 2020, the Beijing Summit of The Global Sharing Economy Forum also established another historical waypoint for 2030.

At the Summit, Jun Ge, Secretary General of GLASE and Executive Director and Global CEO of ToJoy, together with many foreign and domestic experts, released an exciting mid- and long-term initiative—the strategic vision of "Dual Reduction". This means the reduction of global new resource consumption and labor time by 50% respectively, expected to be realizable by 2030.

In addition to the huge breakthrough and milestone of the age of the Great Sharing Economy represented by this concept, this initiative was also lauded as one of the driving forces in the ascent of China's economy.

Behind the seemingly simple phrase "Dual Reduction" is a wealth of propositions as the sustainable development, the Belt and Road Initiative, forging a community of shared future for mankind, and the new era of global innovation. The Dual Reduction concept is a result of various policies working together.

The "Dual Reduction" is a strategic vision first proposed on the basis of insights into the trends of human commercial civilization at the First Global Sharing Economy Forum held in Vienna on November 29, 2019. In the model of the Great Sharing Economy, global new resource consumption and labor time will be gradually reduced by up to 50% respectively by means of sharing and efficient utilization of global resources.

Ge expressed his views, saying, "We are confident that the innovation economy driven by platform empowerment will significantly increase the utilization efficiency of global resources, and significantly save laborers' working hours. It can be said that the realization of Dual Reduction will be a goal to achieve over the next decade. This will also be an age for enterprises to release their innovative strength in a concentrated way."

China is transforming from a traditional economy to an innovation-based economy. The national strategy of "China Sci-Tech Innovation 2030" will be a huge boost for accelerated realization of "Dual Reduction".

In his keynote speech, Hengshan Fan, former Secretary General of the National Development and Reform Commission, was also confident in China's innovation potential. He believed that the Great Sharing Economy can accelerate the process of supply-side reform and help China's GDP transform from high rate to high quality. High quality is based on high innovation, which means China's innovation opportunities will come.

In addition to the increasingly mature external environment, some experts and scholars at the Forum noted: "China's economy urgently needs to be aware of the environment, and Dual Reduction reinforces this. This should be an opportunity to boost the harmonious, sustainable development of all fields."

In the sub-forum "The Great Sharing Economy and The Development of Unicorn Enterprises" directly related to the development of enterprises and new economy, Yong'an Sun, Co-President of ToJoy Aviation Service Consulting Group; Xuliang Hu, founder of 365 Internet of People; Weikai Jin, founder of www.ilvdo.com, and other guests shared their corporate innovation practices for the new economy. They used their own experiences as examples of best practices of  "sharing economics" and "unicorn companies". In their opinions, the Great Sharing Economy is a decisive driver for the large-scale and explosive development of unicorn companies. In turn, the success of unicorns is a verification of the effectiveness of the Great Sharing Economy.

Yves Leterme, Senior Advisor of GLASE and former Prime Minister of Belgium, also took part in the discussion, and gave high affirmation to the outcome of the forum. He said, "Those who master the sharing economy will master the essence of creating a unicorn. This is the best of times for every entrepreneur."

Boris Tadić, Executive Chairman of GLASE and former President of Serbia, also agreed, saying, "Noone could have expected that the future of the sharing economy is now in the hands of China and Chinese enterprises. This will be an advantage that cannot be ignored."

As an international metropolis, Beijing will lead the development direction of the Great Sharing Eocnomy, innovating at the top of the Internet, IoT, AI and other fields.  China is in a new period of reform and opening up and will further draw on and accept the successful experiences of other countries while conducting open sharing of its own global resources. The Great Sharing Economy , supported by the resource and market from the super economy of China, will realize leapfrog development, and benefit the world soon.

At last, as for the long-run realization of the vision of Dual Reduction, the exchange of needed goods between businesses, markets and continents will also help increase both resource efficiency and innovation effectiveness for humanity in the next decade.