NEW YORK, Sept. 23, 2020 /PRNewswire/ -- Clean, skin-centric beauty brand ILIA proudly announces their first-ever brand campaign, "Between Us." The campaign celebrates the beauty of the human bond, centering on real-life relationships and all they share: the traits and the tastes, the shorthand and the secrets.

"Between Us" Anthem Video: https://www.youtube.com/watch?v=rJf5Kua2qmg&feature=youtu.be 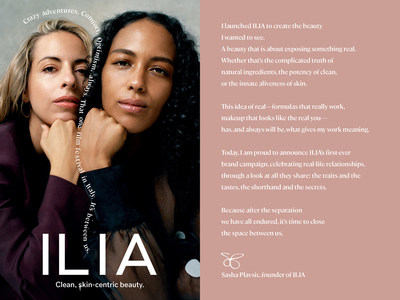 "At a time of profound disconnection and hardship, we want to promote inclusivity and shine a light on our connections. I couldn't be more excited to announce ILIA's first brand campaign, giving a window into what goes on between two people—yet unites us all," notes ILIA founder Sasha Plavsic. "For the brand, Between Us is much more than a one-time campaign: it's a platform we plan to support through a variety of initiatives and creative opportunities, both this year and next."

Conceptualized by Creative Directors Marie Bliss Delpy and Ariella Gogol, in partnership with Plavsic, "Between Us" was shot in New York City by fashion and documentary photographer Sam Nixon, with support from Directors of Photography Michael Casker and Jared Christiansen, hair duo Hiro + Mari, and stylist Shibon Kennedy.

The series of 14 films and 6 stills capture the world, often unknown by the outside, of the "us"—as seen through six female-identifying duos. The cast consists of an eclectic mix of sisters, close friends, and creative collaborators, spanning generations and industries—including critically-acclaimed director Crystal Moselle and her producer partner Alliah Sophia Mourad, as well as Wet frontwoman Kelly Zutrau and her sister Gabriella, a political activist.

The "Between Us" campaign will come to life across wild postings and billboards in New York City and Los Angeles, as well as on social, digital, and iliabeauty.com and @iliabeauty.

About ILIA Since its start in 2011, ILIA has been reshaping the conventions of clean beauty. After moving home for a brief sabbatical, Founder Sasha Plavsic set out to re-create a nontoxic version of her favorite lip balm. Nearly 10 years later, ILIA has continued to rethink industry norms, creating skin-centric makeup with safe, yet powerful formulas that make your skin look and feel alive.

ILIA can be found at iliabeauty.com, as well as at Sephora, Credo, and Mecca in the United States, Canada, Europe, Australia, and New Zealand.

About Sasha Plavsic, FounderBorn and raised in a rural, ocean-side setting of Vancouver, Sasha Plavsic was brought up in nature and learned early on, the importance of self-care - whether in beauty, wellness or other daily rituals. With an interest in design, she earned a degree in Typography at The London College of Printing before working in New York, Los Angeles and Vancouver. She currently resides in Laguna Beach, CA with her husband and two daughters, Lise and Rhea.