NEW YORK, April 18, 2018 /PRNewswire/ -- A campaign launching today aims to raise awareness about the prevalence of discrimination against lesbian, gay, bisexual, and transgender (LGBT) people in the United States, despite the widespread misconception they have basic protections. 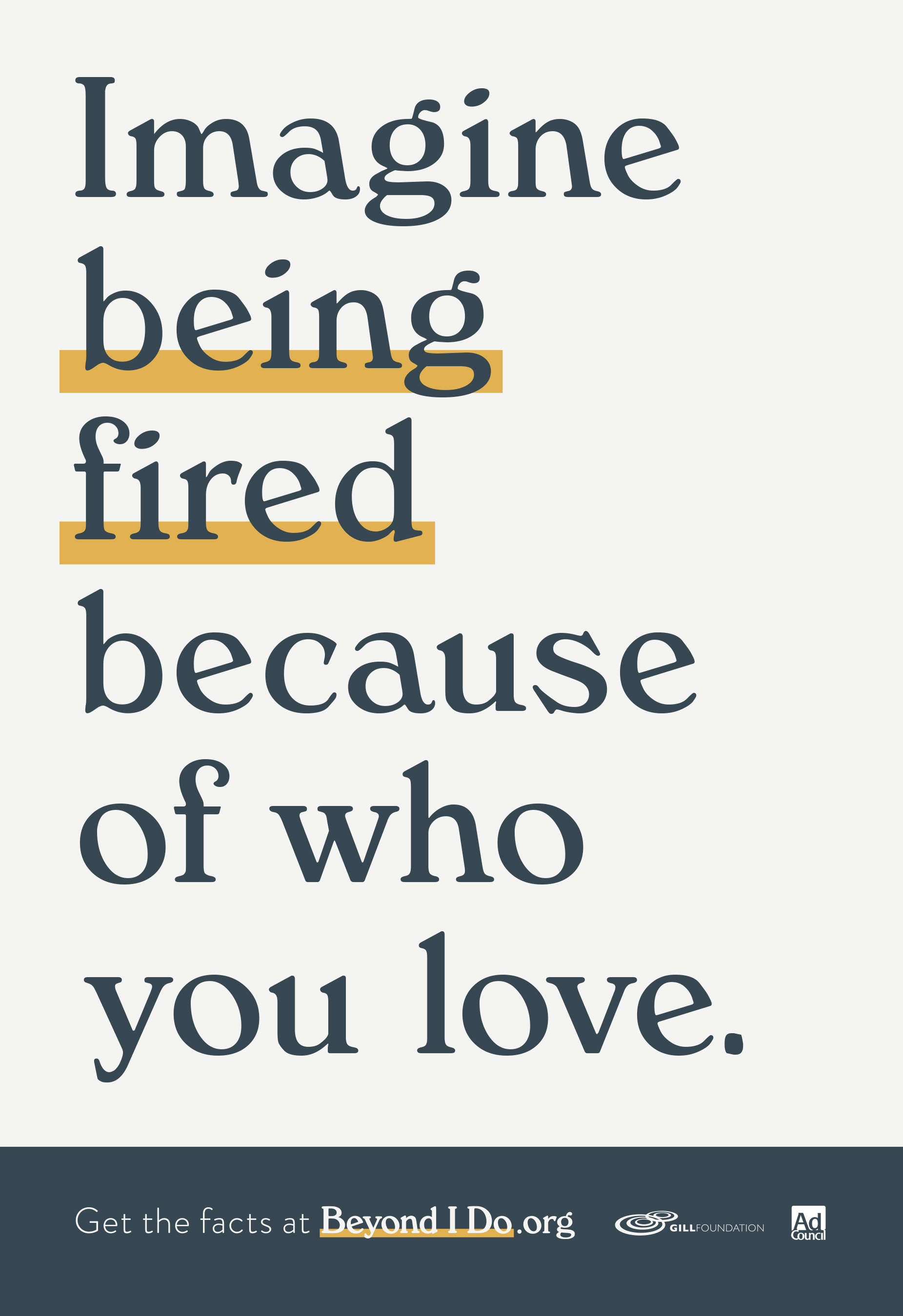 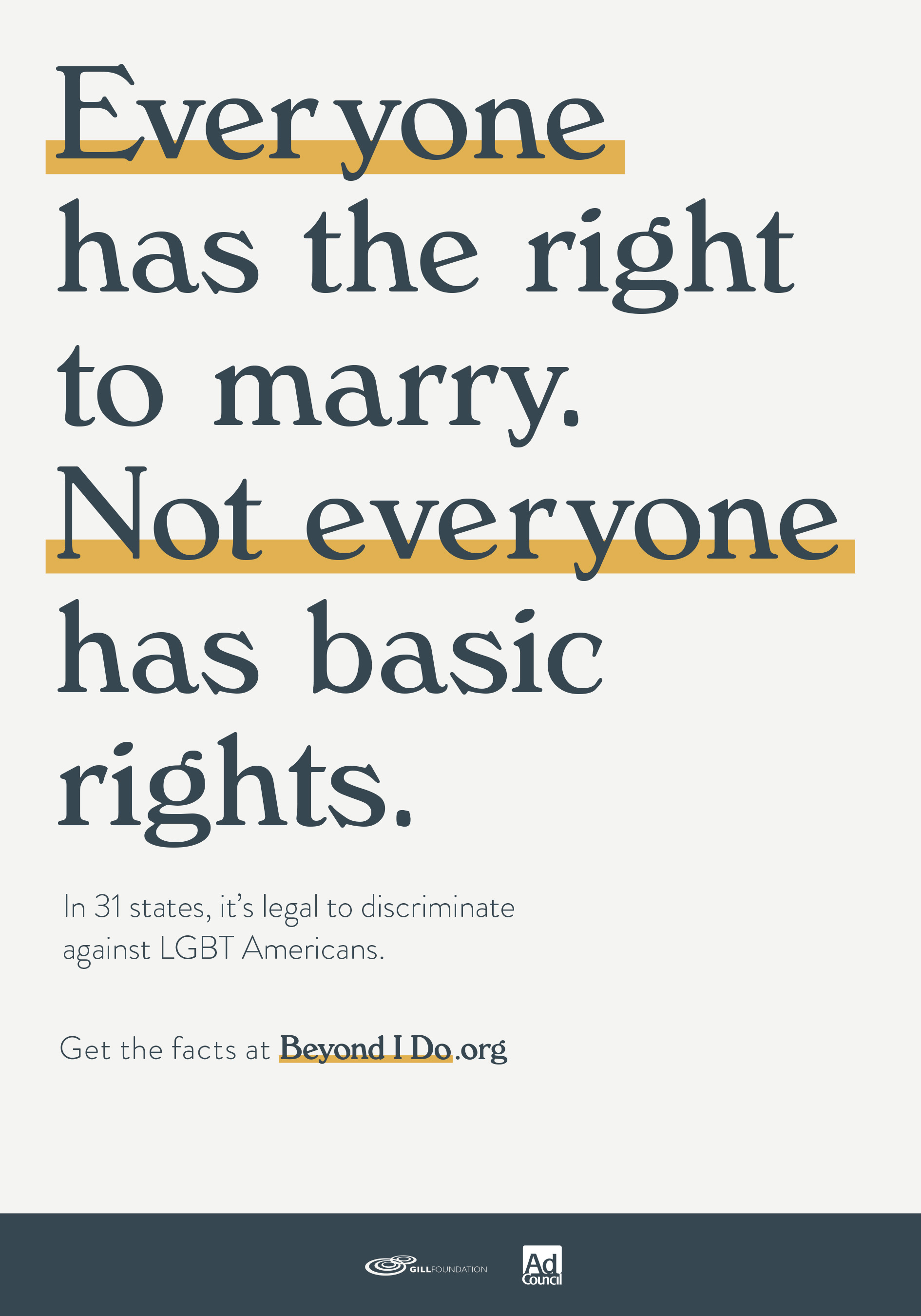 The public service campaign from the Ad Council, in partnership with the Gill Foundation, promotes acceptance, empathy and understanding for the millions of LGBT Americans who can be kicked out of their homes, fired from their jobs or denied services because of their sexual orientation or gender identity. Created by ad agency CP+B with research and strategy from Redscout, the "Beyond I Do" campaign will confront the common misconception that LGBT Americans received full equality along with the right to marry.

The campaign highlights many stories of Americans who have faced discrimination across the country, along with facts about discrimination, at BeyondIDo.org. They speak for the 55 percent of LGBT people who have reported being discriminated against due to their sexual orientation or gender identity. 1 And while public opinion research shows 79 percent of non-LGBT Americans support equality for LGBT people, 80 percent mistakenly believe it's illegal under federal law to fire, evict or refuse service to someone because they are LGBT. 2 3 In reality, 31 states lack comprehensive protections and allow these acts of discrimination against LGBT Americans.4

"Everyone should have the ability to live in safety, support their families, and go about their daily lives without the fear of being turned away because they're gay or transgender," said Lisa Sherman, Ad Council President and CEO. "By sharing powerful and poignant stories, this campaign highlights the values we hold so dear as Americans and provides a real opportunity to grow awareness and empathy."

"Beyond I Do" features stories of Americans from across the country who have been fired from their jobs, kicked out of their homes, or denied services because they are LGBT. They include:

Actor Nick Offerman also lends his voice to the campaign by recording radio spots that will be heard nationwide. Several media partners have made commitments to the "Beyond I Do" campaign prior to launch including Fox Networks Group, Oath, Pinterest and Upworthy.

"The power of this campaign comes from leveraging the shocking fact that millions of Americans are being denied basic rights," said Quinn Katherman, Creative Director, CP+B. "We realized that nothing could ever be as compelling as the true stories these couples have to tell."

"We wanted to be clear and non-judgmental with the message that we are all just human beings and yet some of us are denied basic rights," said Redscout Founder and Chairman, Jonah Disend. "Through real stories, the campaign is exposing the fact that the right to marriage wasn't a golden ticket to equal rights for LGBT Americans."

Read all of the stories at www.BeyondIDo.org and learn more about discrimination protections in your state.

About the Ad CouncilThe Ad Council brings together the most creative minds in advertising and media to address the most worthy causes. Its innovative, pro bono social good campaigns raise awareness. They inspire action. They save lives. To learn more, visit AdCouncil.org, follow the Ad Council's communities on Facebook and Twitter, and view the creative on YouTube.

About Gill FoundationThe Gill Foundation is one of the nation's leading funders of efforts to secure full equality for lesbian, gay, bisexual and transgender (LGBT) people. The foundation makes tax-deductible grants to nonprofit organizations that advance equality by doing research, educating people, developing model policy recommendations, and working within the legal system. To learn more about the Gill Foundation, visit www.gillfoundation.org, like us on Facebook or follow us on Twitter.

About CP+BCP+B, a member of the MDC Partners network, has a client list that includes Domino's, PayPal, American Airlines, Infiniti, The Hershey Company, Goose Island, Fruit of the Loom and Hotels.com. CP+B's employees collaborate across global offices in Boulder, Los Angeles, London, Copenhagen, São Paulo, Hong Kong and Beijing. The agency is one of the most-awarded in the world, having been named "Agency of the Decade" by Advertising Age and "Agency of the Year" 13 times in the trade press. No other agency has won more Grand Prix at the Cannes Lions International Festival of Creativity in the past 17 years than CP+B, and they are the only agency to have won the Titanium Grand Prix three times. Visit CP+B at www.cpbgroup.com, as well as on Twitter, Facebook and Instagram.

About RedscoutRedscout is a brand strategy, design and innovation agency dedicated to transforming the futures of ambitious brands and businesses. Built around the belief that the best way to change a consumer's perception of a brand or issue is to change the way they experience it, we ask provocative questions until we unlock a new way to see the consumer, the brand or the organization. Redscout innovates across categories such as technology, fashion, fitness, financial services, hospitality and retail. With a deep focus on Scouting the culture around us, Redscout was named one of Ad Age's "Agencies to Watch" in 2017. Redscout is part of the MDC Partners network. For more information: www.redscout.com.