GREENVILLE, S.C., May 16, 2018 /PRNewswire/ -- BFGoodrich® Tires is giving amateur racing teams a chance to compete in the legendary Dakar Rally. Until June 30, racers from around the world can apply to the BFGoodrich® Good Project for a chance to race in the 2019 Dakar Rally. 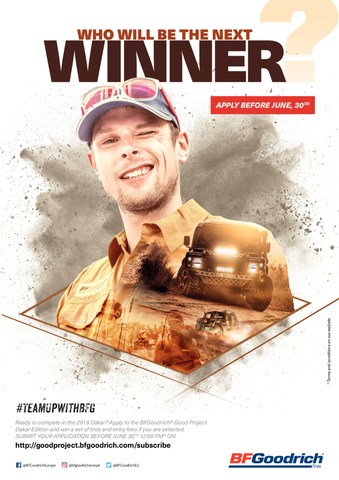 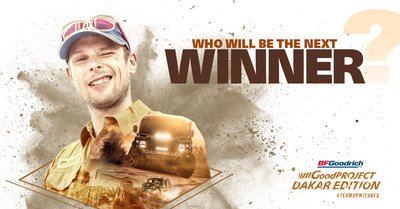 The BFGoodrich® Good Project is a natural extension of the brand's long-term involvement with the Dakar Rally. BFGoodrich had 14 first-place finishes at the Dakar Rally between 1993 and 2018. The brand has provided support for its racers on the notoriously difficult course, and developed bespoke tires specifically for the race.

"The Dakar is a legendary and unique off-road event and BFGoodrich is proud to share in its history," said Harold Phillips, global general manager of the BFGoodrich brand. "This program makes it possible for amateur competitors to have a shot at the Dakar Rally using the same critical equipment that pros bring to the race — an extraordinary set of BFGoodrich off-road tires. This approach brings exciting new competition and enhances the race."

To be eligible to win the Good Project, racers must:

A BFGoodrich jury will choose an amateur team after reviewing all the videos submitted. Winning teams must agree to share the values of BFGoodrich, share their journey on social media channels, and race only on BFGoodrich® Tires in the Dakar Rally.

To read the official contest rules and enter a race team, visit http://goodproject.bfgoodrich.com/subscribe.

BFGoodrich has long used off-road races such as the Dakar Rally as a real-world laboratory for tire development. Whether it's the Dakar in South America or Baja racing in Mexico, tire performance data are collected and used to advance innovation. The Mud-Terrain T/A® KM3, available in North America starting in June, features increased toughness and traction in mud and on rocks as a result of the hard-knocks lessons that can only be learned in off-road racing.

BFGoodrich began its history with the Dakar Rally in 1993 with Jean-Louis Schlesser, who earned a first-place rally-class finish in the Cross-Country Rally 2WD World Cup. From 1999 to 2017, BFGoodrich® Tires saw 14 more first-place wins as an official tire supplier.

With more than 100 years of heritage, BFGoodrich® Tires is dedicated to providing high-performance tires for those who have a passion for driving in virtually any environment. Combining technical expertise with 45 years of motorsports experience, BFGoodrich delivers tires for a full range of driving experiences, from ultra-high performance on the street to off-road terrain with one common theme — extreme performance. Learn more at www.BFGoodrichTires.com, www.BFGoodrichRacing.com, on Facebook at www.Facebook.com/BFGoodrichTires or on Twitter or Instagram at @BFGoodrichTires.