LONDON, April 4, 2020 /PRNewswire/ -- As we close off the opening quarter of 2020, we review the results of the past 12 months in the financial markets across different asset classes ranging from stocks, precious metals and digital currencies.

All of these assets share a common goal to provide individuals with a means to have a store of value that can preserve and increase wealth. 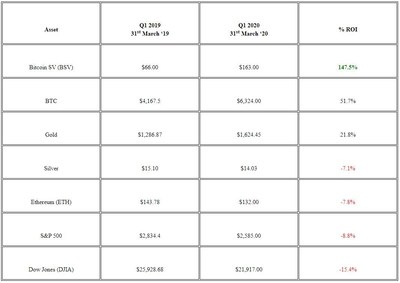 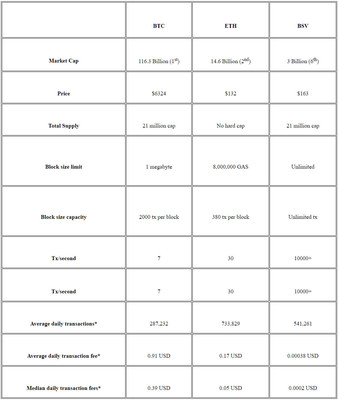 What was the best return on investment over the past 12 months across the different assets?

By far the performing asset over the past 12 months was Bitcoin SV (BSV), which saw a +147.50% increase in its value—nearly three times the amount of BTC and seven times the return of a universal safe haven gold. Ethereum (ETH), which has the second largest market cap in the digital asset industry, actually regressed -7.8% in value.

The S&P 500 and DJIA who continued to ride the biggest bull run in stock market history in the recent month had a decline to experience negative yields overall. It didn't make a difference though as it still fell short against BSV overall by a very large margin of over +150%. This disproves the theory that all digital assets are correlated with traditional markets, however this may still ring true for digital currencies that are speculative in nature only and have no intrinsic value like BTC and ETH.

Bitcoin SV (BSV) has decoupled from all the other assets by a large percentage, it is a testament to its position of having a unique value proposition of focusing on providing utility ahead of being a speculative asset. As it is a means of exchange, it can now be considered an investment option that can now be seen as a legitimate store of value.

BSV has also had to contend with the colluding of digital asset exchanges who combined in a joint propaganda campaign attempting to discredit BSV by delisting from their bucket shops as it directly threatens their business model that is reliant on earning fees from trading multiple speculative coins that provide no value in the real world. Unfortunately, for these exchanges it has backfired and they will become obsolete sooner as their ideological stances have blinded them into making poor business decisions that will continue to cost them millions of dollars in revenue turning away customers who will use other services.

We've seen the performance of the digital currencies over the past year. Let's compare the technological metrics and capabilities head on to see if there is any correlation with the results.

*Data as of March 2020 Source: www.blockchair.com

BSV is technically superior in every way with unbounded scaling limits, the lowest transactional fees (and continues to get cheaper as it scales) and highest transactional throughput capability that is thousands of times more than the top two ranked digital assets.

Ignoring any future price predictions, BSV has the goal to become the single global ledger of everything as there is no need for multiple public blockchains just like there is no need for multiple versions of the internet. This includes having the new value-based internet Metanet on-chain, controlling the new data economy with its unique value proposition of immutable data storage. This will open up a new world of earning potential and usability through microtransactions only possible due to its extremely low transactional fees by removing intermediaries and its aggressive push to keep scaling. It also has the capability of handling smart contracts, tokenization of real-world assets, identity management and of course remains the only true peer-to-peer cash system in the digital world.

BSV is either extremely undervalued, or its competitors are extremely overvalued.

The only way to know is to continue to focus on fundamental utility and ignore speculation. The free market will continue to self-regulate and the true value will be found over time.

BSV is the original Bitcoin protocol and is the only platform that massively scales and has open ended utility. Utility is the only way to create long term token value and that makes BSV also the only choice for real store of value. Proof of work and utility create store of value and nothing else and the markets have proven this in the last year.